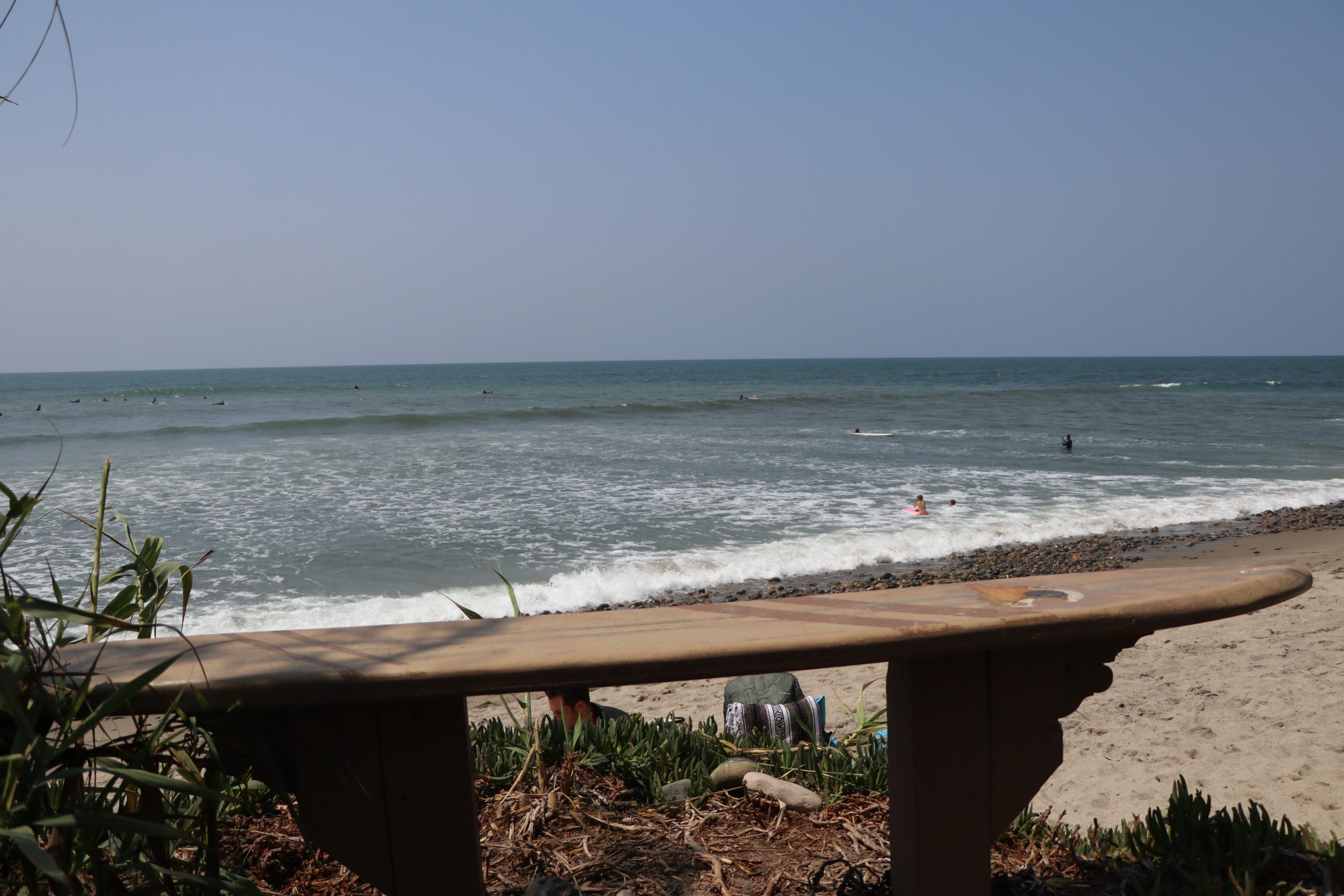 CoastLines: Surfing Adventures at Camp Pendleton Before There Was a San Onofre State Beach

I have three surfing stories from my youth, mostly about unexpected encounters with Marines at Camp Pendleton when I was trying to surf there without getting in trouble for trespassing.

Actually, there wasn’t much chance of it, as there were so few surfers there and few Marines out trying to capture surfers.

A BEACH WITH LOTS OF PUBLIC

One crazy day at Church, a popular surf spot next to San Onofre Creek and next to the San Onofre enlisted recreation center, had lots of public surfers on the beach while Marines were being friendly.

People causing no problems could just stay all day with no issues, the Marines ignoring their surfing or activities on the sand.

So, what happened when I fell from my surfboard on a wave? I swam in to fetch it. There were no leashes back in the day. So, a Marine grabbed my surfboard on shore and hauled it away. Why my surfboard and nobody else’s?

I followed, wondering if I would get the board and why mine was seized. Dozens of boards were sitting on the beach and no Marines doing anything to other surfboards.

It turned out that about eight of us surfers were rounded up and boarded onto a Marine vehicle and were shuttled a mile or so away, where we were formed into a lineup for, I think, a colonel’s wife.

Evidently, a surfer wearing blue board shorts had mooned the colonel’s wife on the beach, or at least she must’ve thought so.

She spied the eight blue-trunked surfers and said, nope, it was none of us that had mooned her. The Marines took us back to Church and gave us back our surfboards.

OUR FRIEND, STRANDED ON THE BEACH

There was another time, when a carload of us had taken a dirt road off Interstate 5 halfway to Oceanside and decided to pull off the freeway to park our car, easily walk to the beach and surf Las Pulgas, then a deserted Camp Pendleton beach.

We left our friend Betty on the beach while we were surfing. We were shocked to spot a lineup of troops motoring up the beach in carrier vehicles. They weren’t going to arrest Betty, it turned out; they appeared to be surrounding her to detain her on the beach, making some fun moments.

They surrounded her and announced to all us surfers that we needed to come in immediately, which we had no choice. On the beach, we could see that Betty was humoring them, and they could humor all us surfers, everyone creating fun.

They let us return to our car and get away—no recourse.

WE GOT STUCK AT BASILONE

Only one incident at Camp Pendleton was scarier for me.

My friend Tom, then in the Army, was stationed in Virginia. He had driven his VW bus home with Virginia license plates to San Clemente. He invited me to join him surfing at San Onofre by using his military ID to get him and his VW to go through the Basilone Road Marine Corps gate. I was stoked.

But as we arrived at the Basilone exit, we could see a dirt opening next to a trail that led down a bluff to Lower Trestles, and there were two or three surf vehicles parked there. Tom and I decided it was OK to park, surf Lowers, and hours later, walked back up the bluff path and see where we stood.

“Tom, what do you see?” I asked as Tom (a taller gentleman) was sneaking a peek up at the parking area as we returned. He discovered some trespassing civilian surfers were being busted by military police. “Stay low!” Tom told me. We would wait out the surfers being processed, whoever they were.

Then we would show the Marines Tom’s Army ID and get us out of the trouble.

“They see me,” Tom replied. Busted.

Tom explained to them that he was stationed in Virginia, showed them his ID and thought his ID meant he could park and surf wherever at Camp Pendleton, using his ID.

The Marines were friendly, but they warned me I would have to sign a letter accounting my trespassing, signing to never do it again.

“Well, gee,” I replied, “we don’t have waves or anything like these in Virginia. This place is amazing for surfing, and thank you for letting us try this place, Lower Trestles.”

I had no ID with me, just my board shorts and Tom, identifying himself with his Virginia military ID. So, I signed to never return without permission. We then bid the Marines adieu and drove back into San Clemente.

Now, there’s a fourth favorite Camp Pendleton story that it isn’t about me. It’s about Tom, on a day he was surfing Upper Trestles, before he’d entered the Army.

TRY TO GET YOUR BOARD BACK

That day, years earlier, Tom had lost his surfboard to the shore and stayed out treading in water as Marines confiscated his brand-new shiny surfboard, expecting him to come in for the board.

So, Tom, a fine swimmer, swam north around Cotton’s Point to escape, abandoning his surfboard to the Marines. That was quite a swim, taking him off the base.

Tom stepped into the Cyprus Shore office at the south end of San Clemente, where it just so happened that his mother was on staff. Tom called the San Clemente police from there to report that his surfboard had disappeared from the beach and details of its design.

The cops sent a description to Camp Pendleton, which surmised that a board matching the one that had been stolen by a surfer who had decided to abandon it and flee to the north. Tom got contacted, he accurately described the surfboard and got it back.