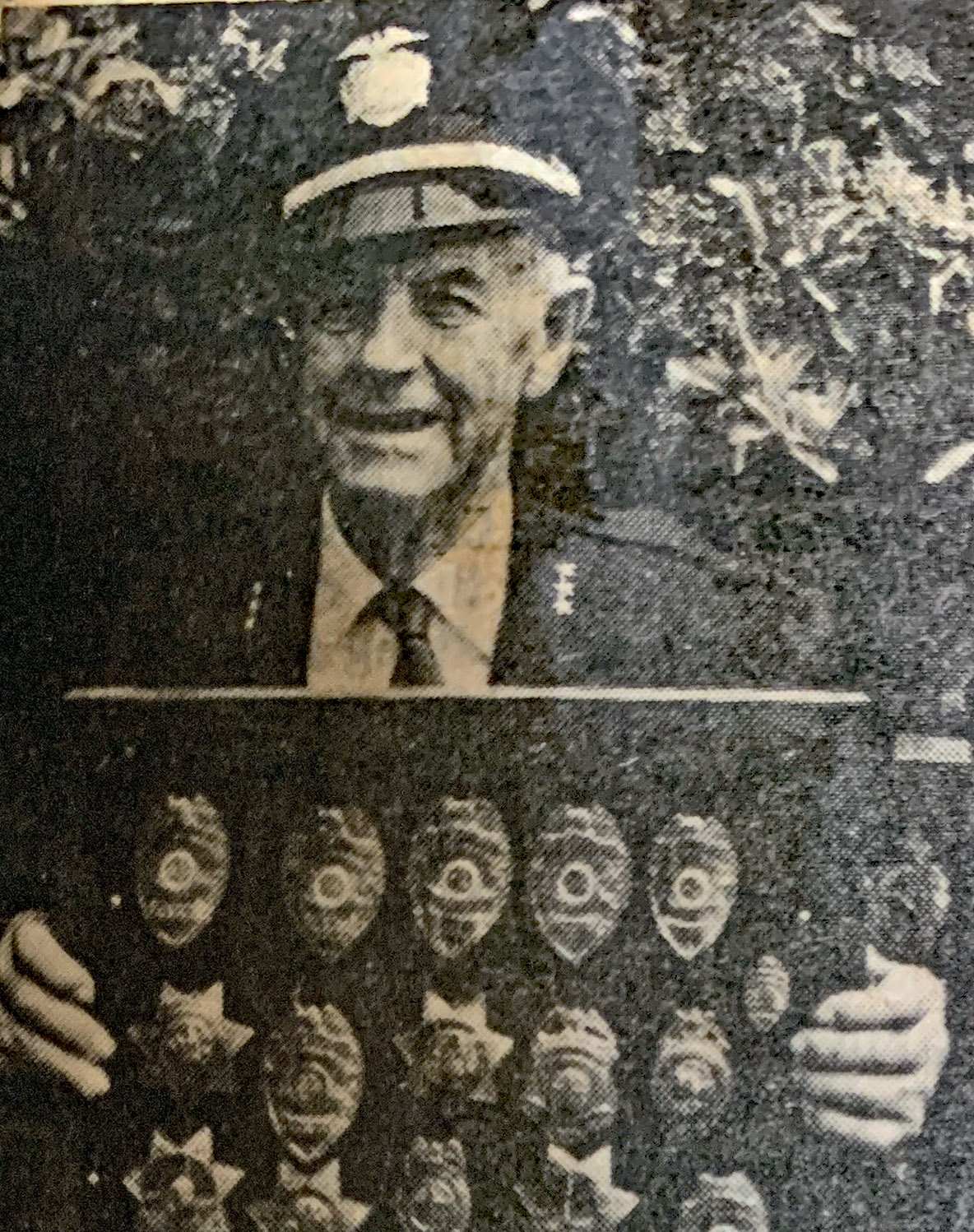 “I could’ve been a millionaire if I’d wanted to,” Harry Comber once said.

He was San Clemente’s first motorcycle cop, hired in 1929. Two years later, he was appointed the third chief of police in San Clemente history.

Meanwhile, patrolling the streets and coastline of San Clemente, he busted bootleggers trying to sneak illicit liquor through San Clemente during Prohibition.

“Every cop in the country was on the take in those days,” Comber would tell me decades later during the final chapter of his life.

He resisted the bribe attempts, he proudly declared.

As we related in the San Clemente Times on Oct. 8, Comber became embroiled in a political controversy over his traffic tickets, which local merchants complained were sullying San Clemente’s reputation and driving away business. He resigned in 1933 to “preserve harmony,” he said.

Comber went on to a successful law enforcement career in Los Angeles. He happily returned to visit San Clemente in the 1970s to share recollections—his liveliest stories being about bootleggers trying to sneak illegal whiskey up and down the coast.

“Instead of collecting millions,” I wrote in a Daily Sun-Post profile, “Comber says he collected adventures. Time and again, he got shot at, got offered bribes, and arrested bootleggers who couldn’t believe he wasn’t on the take.”

In one case, Comber claimed to have captured 14 smugglers on the beach in San Clemente with a stash of liquor, turning down a $5,000 bribe to return the contraband.

Another time, Comber said, he turned down an ongoing offer of $3,750 per week to turn his eye from contraband.

Clandestine shipments often would arrive by sea in speedboats. Shipments might land at Cotton’s Point, Calafia Beach or the San Clemente Pier, local historian Doris Walker wrote in her book The Heritage of San Clemente.

“Many fishermen along the isolated Orange County coast were recruited to serve as rumrunners, shuttling the bottled goods from ship to shore,” Walker wrote. “It became an honorable as well as lucrative profession, especially coming as it did at the start of what would develop into The Great Depression. The rummies were even admired for the danger they faced and the coveted goods they delivered.”

El Heraldo de San Clemente described one high-powered motorboat recovered 300 feet north of the pier, abandoned in the surf line, evidently having been “seen, chased and the liquor dumped in the ocean.”

Other bootleggers smuggled the goods by car, up or down Highway 101.

In 1931, El Heraldo reported a seizure of 75 cases of liquor by federal officers from three cars at San Clemente—one of the biggest busts in the town’s history.

Another article told how Chief of Police Comber and Officer Earle Coleman pulled over a suspiciously slow-moving car, finding 15 gallons of “moon” in the back seat.

“Well, boss, I guess you all got me,” the suspect was quoted as saying. “And it was good stuff.”

Comber said he once halted a gasoline tanker truck, its tanks full of contraband booze.

He said he refused bootleggers’ offers, “very much satisfied” with his job as police chief.

“San Clemente paid a better salary than any other city,” he told me.

So, what did Comber do with the bootleg liquor he seized? To hear him describe it, evidently The Great Depression in San Clemente wasn’t quite as depressing as it could have been.

He insisted he only gave it to citizens he was confident wouldn’t sell it.

“Everybody knew everybody,” he said. “We were one big family. It was a wonderful game in those days.”

And maybe, by some stretch of the imagination, Comber could rationalize his giveaways. Prohibition, which lasted from 1920 through 1933, merely outlawed the manufacture, transportation and sale of booze—not drinking it.

“By law, any wine, beer or spirits Americans had stashed away in January 1920 were theirs to keep and enjoy in the privacy of their homes,” history.com reported. “For most, this amounted to only a few bottles, but some affluent drinkers built cavernous wine cellars and even bought out whole liquor store inventories to ensure they had healthy stockpiles of legal hooch.”

Comber held no grudges over the political spat he said had cost him his job. During his senior years, he told only happy memories of San Clemente.

He insisted back in 1933 that he had issued a slew of speeding tickets along Highway 101 on instructions of the city council.

Hailed for his “honesty, integrity and efficiency” when named police chief, Comber said he originally got the job of San Clemente traffic cop because he’d been a motorcycle officer in Seattle, where San Clemente founder Ole Hanson had been mayor.

Comber said the first speeder he ticketed in San Clemente turned out to be a city councilmember and, instead of reprimand or dismissal, he got a commendation.

Earlier, in Seattle, his first assignment as a traffic cop was just as memorable. He said his motorcycle, pursuing a speeder, slipped on a slick of cow manure and crashed.

CoastLines: A Look Back 35 Years: How Did San Clemente Do?

Life’s a Beach: Thanksgiving: Adopting an Attitude of Gratitude