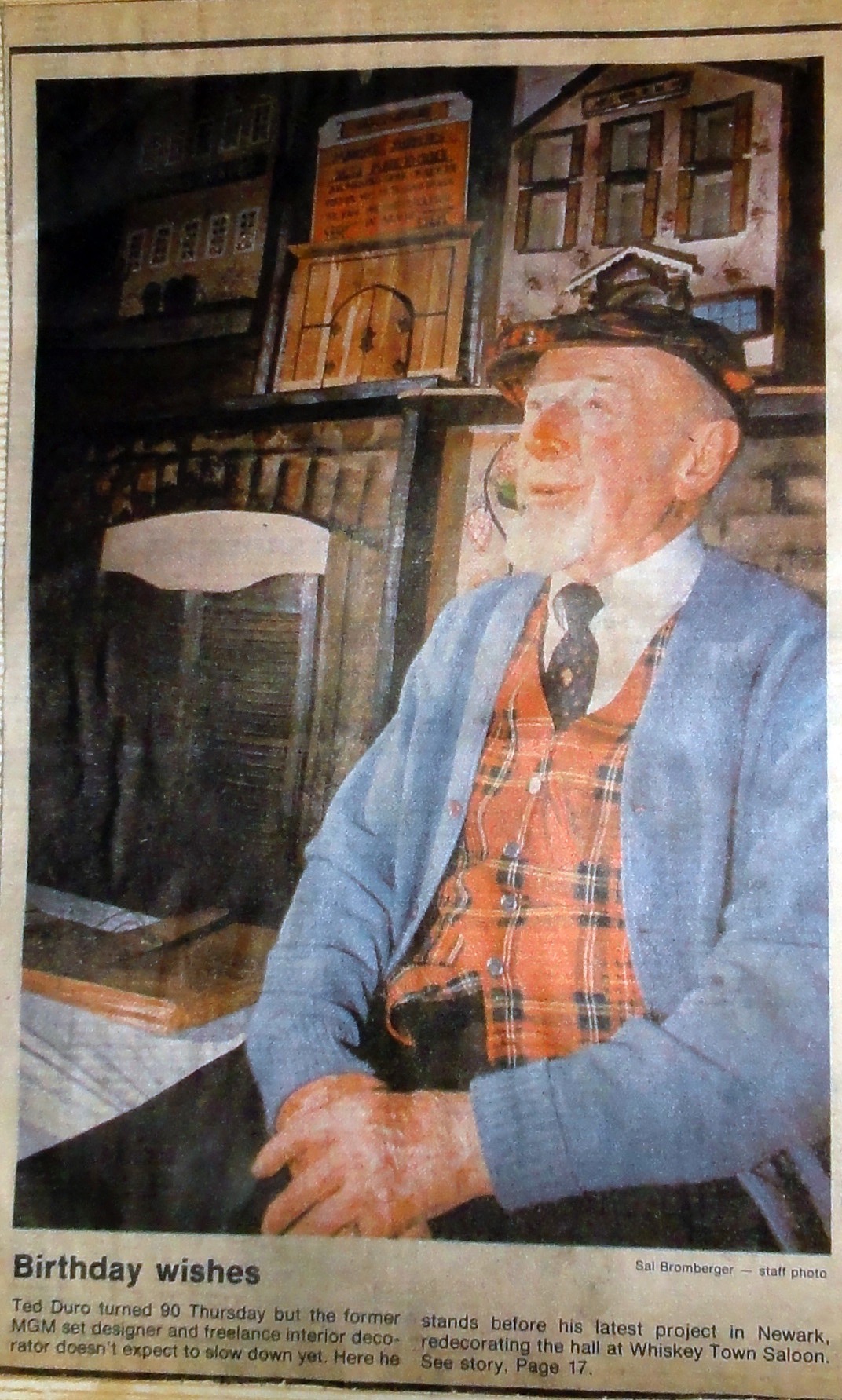 For San Clementeans who revere our landmark Miramar Theatre—presently under renovation—let’s introduce you to Ted Duro, a remarkable, likable artisan.

It was Duro who illustrated the cinema theatre’s opening-night program for May 12,1938. His signature adorns the cover.

It was Duro who painted the building’s signage, calling the theatre El Hidalgo. Then San Clemente decided—just before opening—to instead rename it the San Clemente Theatre.

Today, you can still see remnants of letters “El Hidalgo” on the 44-foot-tall tower of the cinema, after restoration workers had gently uncovered the lettering.

Chances are, you won’t believe art designer Duro’s story—what brought him to San Clemente in 1935 and carried him onto an enchanted life with friends here more than elsewhere.

Let’s also dip back into the 1920s to read a jaw-dropping account about what the state of California had done to Duro, unbelievably, before his art design career began.

Born in 1894, Duro died in 1993 at age 99 in Northern California, in Hayward. Local newspaper articles described him as a delightful personality, a talent still producing artwork that locals enjoyed very much.

“The Man with the Magic Touch” was the headline in a Northern California local newspaper.

In 2010, I worked for months with Mickie Watson, a resident of Orange whose back patio was decorated with painted, carved redwood-ceiling beams that Duro had created for a local business in San Clemente in 1937.

Decades later, Mickie’s husband, Ernest, had discovered the beams at a storage yard in Capistrano Beach and obtained them for the Watsons’ patio. Mickie asked for my help, trying to track down a photo of where the beams had been built in San Clemente.

Had the beams been built inside the Casino? Or maybe a restaurant? Or where?

In 1998, “Ern” had passed, and Mickie became determined to track down a photograph of the beams. It took 12 years to find her treasure trove.

The beams had decorated above the lunch counter inside Boyd and Frances’ Cafe at North Beach. To Mickie, it was exciting. I was so pleased to share her story with readers in San Clemente and in the Orange County Register.

Mickie Watson’s research of 1930s newspapers and other resources had stated that Duro had helped design the movie set for a 1935 Metro-Goldwyn-Mayer film, David Copperfield.

Duro later purchased the Hollywood movie set for $750 to bring to San Clemente.

The movie—completed in 1934—was released in January of 1935, described as about “a gentle orphan (who) discovers life and love in an indifferent adult world.”

“Ted Duro already had a great reputation by May of ’35” for an ambitious Downtown San Clemente project, Watson said.

“His first project as an interior designer was a hotel in San Clemente,” according to an article Watson found.

Two local newspaper articles described how Duro worked with the manager of the San Clemente Hotel to launch an open-air motion picture theatre across the street from the hotel on June 15. Duro “executed the decorations,” an article said.

“With a lot of modifications and alterations, he came out with a hotel, bar, restaurant, etc., and according to Duro, it became quite popular from that resort area,” an article stated. “That’s only one of his exploits.”

How long could the hotel and restaurant last in San Clemente? Or was there no newspaper follow-up on how they fared?

It could have been difficult to stay alive during San Clemente’s economic hardships of The Great Depression.

Meanwhile, painting was a big part of Duro’s design business. He also was active in community activities.

He was listed among local dignitaries featured at the grand opening of the Casino San Clemente in 1937 and the San Clemente Theatre in 1938. Duro and his wife, Irene, then moved to San Diego and on to other communities over the decades.

Duro renovated and decorated more than 600 older buildings from San Diego to Seattle into shops, hotels, restaurants, and a wedding chapel. His favorites were with lively Bavarian, Alpine, Western and other specialty interiors and exteriors.

Sadly, as a youth, Duro drove on a joyride in a car that sent him to San Quentin Prison, convicted on car theft. When he got out, a newspaper article report labeled him as “a two-time loser.”

That’s because Duro was then convicted of writing a $16 check to pay a bill, discovering that his bank account was short, having just $14.44.

The checking’s shortage of $1.56 led to Duro being sentenced to up to 14 years at Folsom State Prison.

There, he learned artwork talent in prison while serving six years of the 14-year sentence, an article said.

He petitioned to the governor, submitting an ornate parchment decorated unlike any that the governor’s office had ever observed. Duro asked the state Supreme Court to parole him so he could pursue his newfound art.

“The Folsom prisoner submitted what was probably the most artistic parole application ever received in the governor’s office,” a newspaper article said. “It contained drawings of moving picture screen celebrities.”

In one newspaper article, a company in Oakland offered to employ Duro if released.

Also, Duro submitted a letter to the governor from the brother-in-law of acting star Janet Gaynor, offering to help Duro set up as a commercial artist if granted parole.

Evidently, it worked, giving him a chance with MGM.

“A gifted man who was sentenced to 14 years in prison because he overdrew his bank account $1.56 was on the threshold,” a newspaper article said, “after Gov. (James) Rolf today commuted his sentence.”

It was on March 30, 1933, California’s governor announced the release of Duro from Folsom State Prison, six years after Feb. 22, 1927, when the insufficient check had put him away.

Mickie Watson discovered a photo of Boyd & Frances Drive-In Cafe at North Beach, showing the wooden beams, dating to 1937, above the dining counter. She had located Boyd and Frances’ son Ronald Sturgis in Tustin. He showed her the lunch counter photo with Duro’s beams above.

“I’m shaky. I’m smiling. I can hardly keep from smiling,” Mickie said. “This is, like, closure.”

Ronald’s uncle, Bob Sturgis, had taken over the old family cafe, renaming it Bob’s Drive In, and it was still there in 1956, Mickie had learned.

JUST ONE OF HIS LEGACIES

“Ted Duro, one of the most clever designers in the business, outdid himself with the Bavarian Room decor,” a Hayward area writer declared about a Duro project.

“The mezzanine business garden is a masterpiece,” the writer said. “In fact, it takes more than one visit to appreciate all the charming detail in this tiny replica of an Alpine hideaway.”

Cited for a quick wit, Duro was saluted by clients and friends for a delightful sense of humor. An article said that the “master decorator growls at waste, laughs at the world and greets life with a mischievous twinkle in his eye.”

“I have so much to do,” Duro told a writer while working as much as possible during his 80s, “that I hate to go to bed at night. So, I get up as early as I can in the mornings.”

“He brushes the idea from the air with a wave of his hand and concludes, ‘Retire, you’re kidding! That’s out!’ ” an article said.

It would have someday been a thrill to be able to see Duro back in San Clemente before his 1993 passing, to salute him, his career and his ideas for the Spanish Village by the Sea from 1935-38 during his residency.