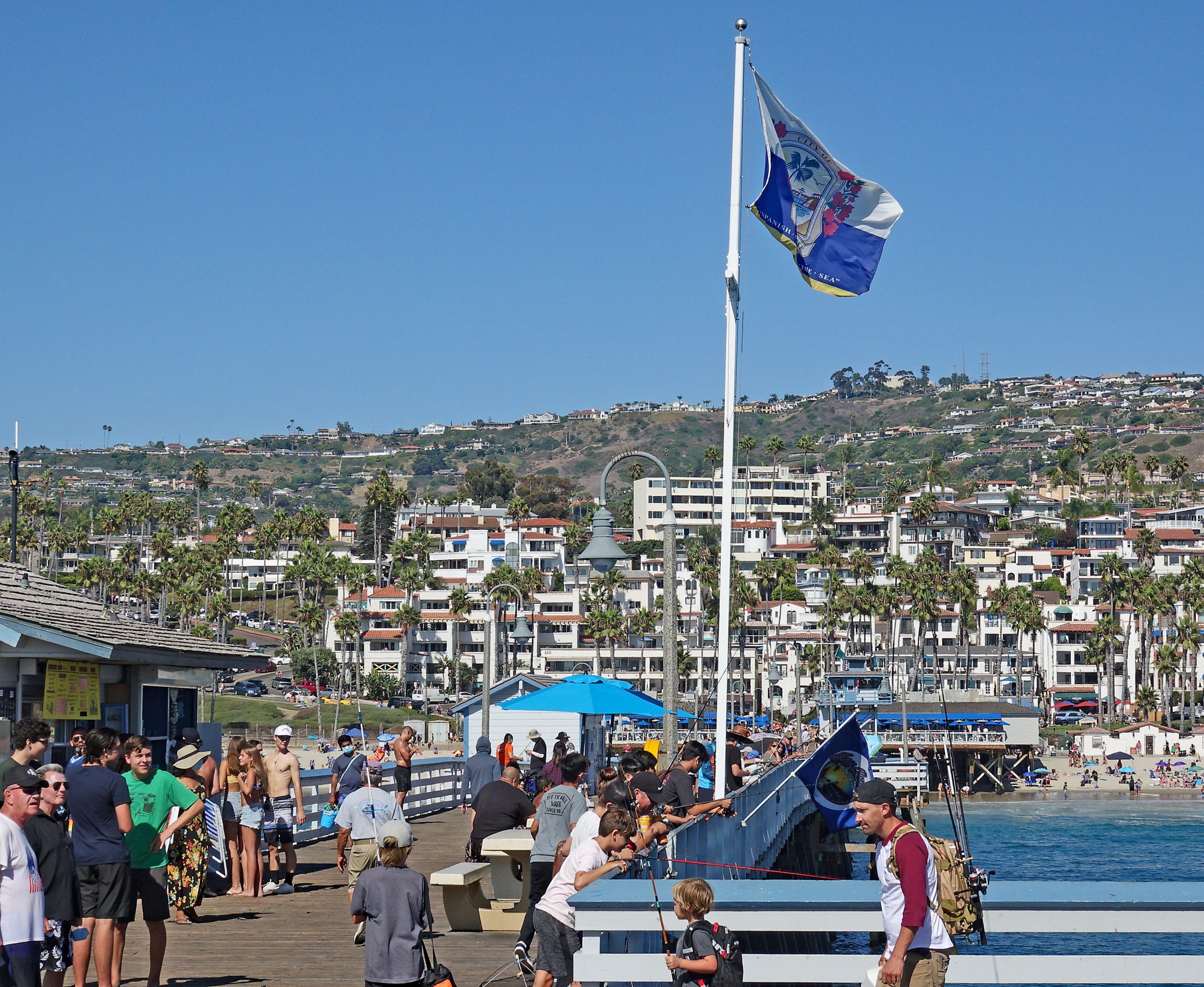 CoastLines: The Pier: A World of Its Own

You stroll out to the end of the San Clemente Pier, turn around and gaze back at the continent. “I like it out here,” you silently muse. It’s almost as if it’s an island.

I often get the feeling there’s a different mindset at the end of our pier, more than 1,200 feet from the cares of the rest of the world.

Even when it’s crowded, it’s peaceful and happy. Enjoy it. When uncrowded, which is most of the time, the pier is more tranquil and can inspire meditation.

If you walk out to the end at dawn, you can have an awesome sunrise to yourself, watch it unfold, bringing day to the western edge of North America.

I walked out on the pier Saturday to view the PierPride Foundation’s new public art, painted onto the wall of the pier’s restroom. It’s colorful, cleverly done. It’ll be a favorite spot for selfies.

Artist Andi Goud’s image of an orange octopus peeking out from an open door actually looks sort of 3D. I’m wondering when someone texting while walking from the end of the pier will try to barge in the wrong door and be rewarded with a gushy hug from the octopus.

At the end of the pier, I took a fresh look at San Clemente’s municipal flag, waving high atop a flagpole opposite the Pier Grill & Tackle concession.

I imagined, for a moment, our get-away-from-the-cares-of-the-world pier being its own republic.

If you’ve ever been to Key West, Florida, which playfully proclaims itself the Conch Republic, you know what I mean.

Key West—southernmost town in the USA, at the end of a necklace of tropical islets just 90 miles from Cuba—has nurtured a Caribbean culture around a Margaritaville Conch Republic vibe.

It’s not as if San Clemente ever seceded from the USA, as Key West proclaims satirically. San Clemente used to display the American flag at the end of our pier, flown by the concessionaire.

When local teen Liam Hallinan renovated the flagpole for his Eagle Scout project, there was an agreement the concessionaire would raise and lower the flag daily. Then a new concessionaire took over the shop and found it to be difficult for her. I could fully understand, after seeing what it took.

Liam offered a plan to illuminate the flagpole at night. But would that constitute “development” on the pier and necessitate the city applying for a Coastal Commission permit?

I never heard an answer. The city went ahead with an alternative—flying the San Clemente flag instead. It wouldn’t need night illumination or raising and lowering daily.

City hall’s point was that the pier already had two American flags—Tower Zero and the Fisherman’s Restaurant and Bar. And the city flag, which doesn’t get much other public exposure, could prove to be enchanting to see at the end of our pier.

I wondered what public reaction would be. I consulted a crew of early-morning pier walkers whom I’ve long known, including Rick Divel, our town patriarch. They loved the city flag now decorating the end of our pier.

While it would have been splendorous to see Old Glory illuminated at the end of the pier, I’ve come to conclude that town flag, designed by Rick Delanty, nicely fits the vibe that I feel during occasional morning walks to the end of the pier.

I turn around and smile back at the vast North American continent. It’s as if I’m on my own island. Our island. Connected to land by this 1,200-foot-long bridge.

In our hearts, the pier is a magical place. Its biggest fan club, the PierPride Foundation, recently dedicated the restroom renovation and octopus mural, with more pier enhancements to come. See pierpride.org.

SOME HISTORY TO CELEBRATE

— San Clemente founder Ole Hanson built the pier in 1928 as a gift to the town.

— Townspeople united to pass a bond election and rebuild, after 1939 hurricane surf devastates the pier.

— A 1983 “Save Our Pier” fund drive again united us, after an El Niño storm toppled our icon.

— The pier’s own “Navy,” the San Clemente Sportfishing fleet, operated there for decades, until Dana Point Harbor opened. The pier’s “Army”—children—would haul fishermen’s catch from the end of the pier to their cars in wagons.

— The pier’s onetime boat club and boathouse buildings now are reincarnated as the Fisherman’s Restaurant and Bar.

— The pier is known for its fireworks shows, woody car shows, chowder/taco cook-offs, Ocean Festival games, season-opening lobster frenzy and iconic photos of enormous fish that have been caught.

— The pier has forever been a rite of passage for youngsters leaping into the ocean, as junior lifeguards still do today.

— Our pier has inspired local characters, from Don Hansen to Kenny Nielsen, to pursue careers at sea. Through the decades, multiple personalities who frequented the pier have been dubbed “Mayor of the Pier.”

— The pier inspired local resident Herman Sillas to write a longtime newspaper column (eventually a book), View from the Pier, reflections on life from the helm of his fishing pole.

— My vote for best-loved fish caught and returned to sea from the pier is the leopard shark.

— Oh, and who could forget the giant neon fish that once was a landmark atop a cafe at the end of the pier?