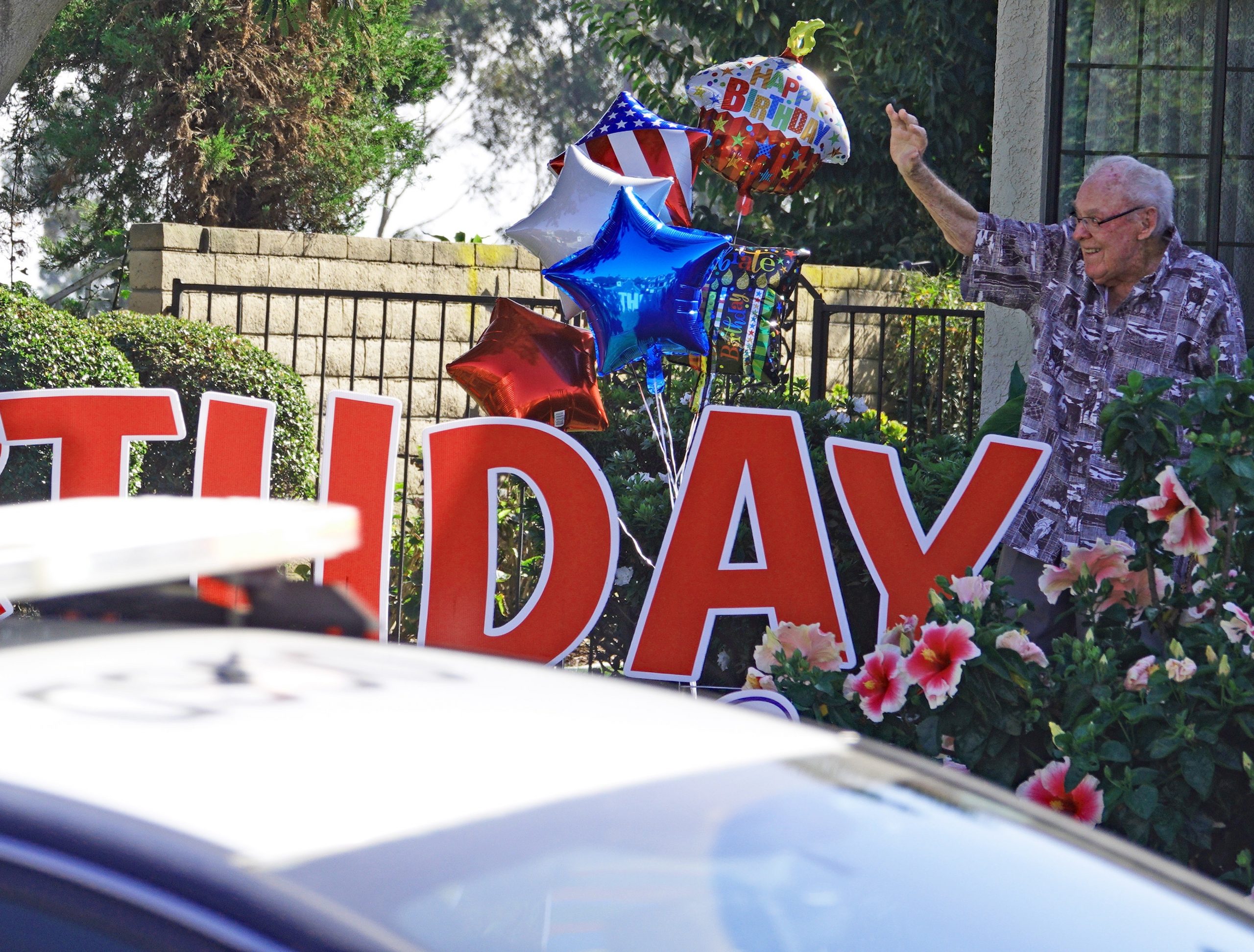 Over the past three months, three San Clemente veterans of World War II have turned 100.

“I’ve been very fortunate,” Greve said. “I wasn’t injured in the war. I just did my part.”

During two years of Army duty in the South Pacific, he served on islands between New Guinea and the Philippines, a battery commander, 90mm guns.

“We took a shell on Los Negros (Island,) but it was a good miss,” he recalled.

He retired as a captain and went on to a career as a mechanical engineer with oil companies.

Until age 93 or 94, he was still riding his bicycle around his Calle Frontera neighborhood. After that, he continued with walks for exercise.

It seems remarkable for a single town to be home to three World War II veterans who reached 100 just three months apart; this also comes at a time when America’s population of surviving WWII veterans is dwindling.

On Aug. 18, San Clemente’s James McDonald turned 100 at home with a police/fire vehicle drive-by celebration coordinated by the Veterans of Foreign Wars. He retired from the Army as a captain after serving a communications role in the Pacific, including Okinawa, during World War II, then later in Korea.

On Aug. 31, Bill Slead turned 100. The Air Corps veteran went on to a career as a fire captain in Malibu and San Dimas, retiring to a home along Avenida Hacienda. The neighborhood organized a centenary celebration, with friends stopping by through the day and an Orange County Fire Authority drive-by.

October’s centenarian, Elmo Greve, was treated to a drive-by salute from deputies and firefighters organized by the VFW and greetings from neighbors who have known him since 1985, when he and his late wife, Johnnie Marie, moved in.

I also was informed that Navy veteran Al Blake turned 100 on Dec. 13, 2019, celebrating at San Clemente Villas, where he has resided since 2005. He repaired aircraft during World War II, including duty at Asmara in Africa. After the war, he joined North American Rockwell, where his work contributed to the Apollo space program, his son David said.

THE MOST SENIOR VETS

Unless someone else comes forward, San Clemente’s oldest WWII veteran centenarians—at the time of this writing—were Bob Hayden, 103, and Robert Thacker, 102.

I attended Hayden’s 100th birthday party in 2017, a gala affair at Talega Golf Club, attended by some 200 people honoring his decades of community service in San Clemente. His contributions are enshrined on the city’s Wall of Recognition. The Boy Scouts of America recognized him as Orange County’s oldest Eagle Scout.

A presentation about his life noted his military service, but not much about it, so I contacted him recently to ask what his role was and where.

It turns out he served a variety of capacities for the Army stateside early in the war, initially in finance, then was told they needed engineers, sending him to school for it, then telling him they needed him in infantry after all, and so training him.

He arrived in Marseilles, France, in January 1945, as an Army truck driver, making his way north into Germany, crossing the Rhine River on a pontoon bridge built by the Army Corps of Engineers.

“I was fortunate,” he said. “I drove roads where trucks were on the side, strafed, but I personally never was strafed.”

At 103, he remains an active Rotarian who drives on a limited basis and takes an exercise class.

San Clemente’s 102-year-old WWII veteran had a memorable 100th birthday party at his home in 2018.

Retired Air Force Colonel Robert Thacker was, at the time, recovering from being struck by a car in an El Camino Real crosswalk during one of his San Clemente walks.

A month before his 100th birthday, he was hospitalized, sent home three weeks later, thanking his doctors, determined to recover. And he did. His home was packed with friends, family and well-wishers.

You’ve probably already read a story about him that has been well-chronicled.

He piloted one of 11 unarmed B-17 bombers flying from the Mainland USA to Hawaii, deploying the planes to the Pacific. He departed from California on a peaceful evening, Dec. 6, 1941.

Concluding an uneventful 14-hour overnight flight, Thacker approached the Hawaiian Islands. As he passed over Diamond Head, what was that smoke up ahead? There appeared to be a flurry of activity. Thacker and his crew discovered they were flying directly into a surprise Japanese attack on Pearl Harbor. Low on fuel, the B-17s needed to land immediately.

Landing safely, though his aircraft had been hit, crippling the landing gear, Thacker warned his crew not to run for the hangars. They hid instead in a nearby swamp as Japanese planes strafed and destroyed the hangars.

Thacker went on to fly in the Pacific and Europe during WWII and, later, over Korea. He performed high-altitude reconnaissance over Vietnam.

In 1947, he and a copilot set a world record—of 14 hours, 33 minutes—flying a twin-engine, propeller-driven fighter plane nonstop 5,051 miles from Honolulu to New York City.

During a visit Tuesday, the colonel looked healthy at age 102, his voice as strong and vibrant as ever, his mind sharp as a tack, and he confided he still is able to walk laps around his cul-de-sac.