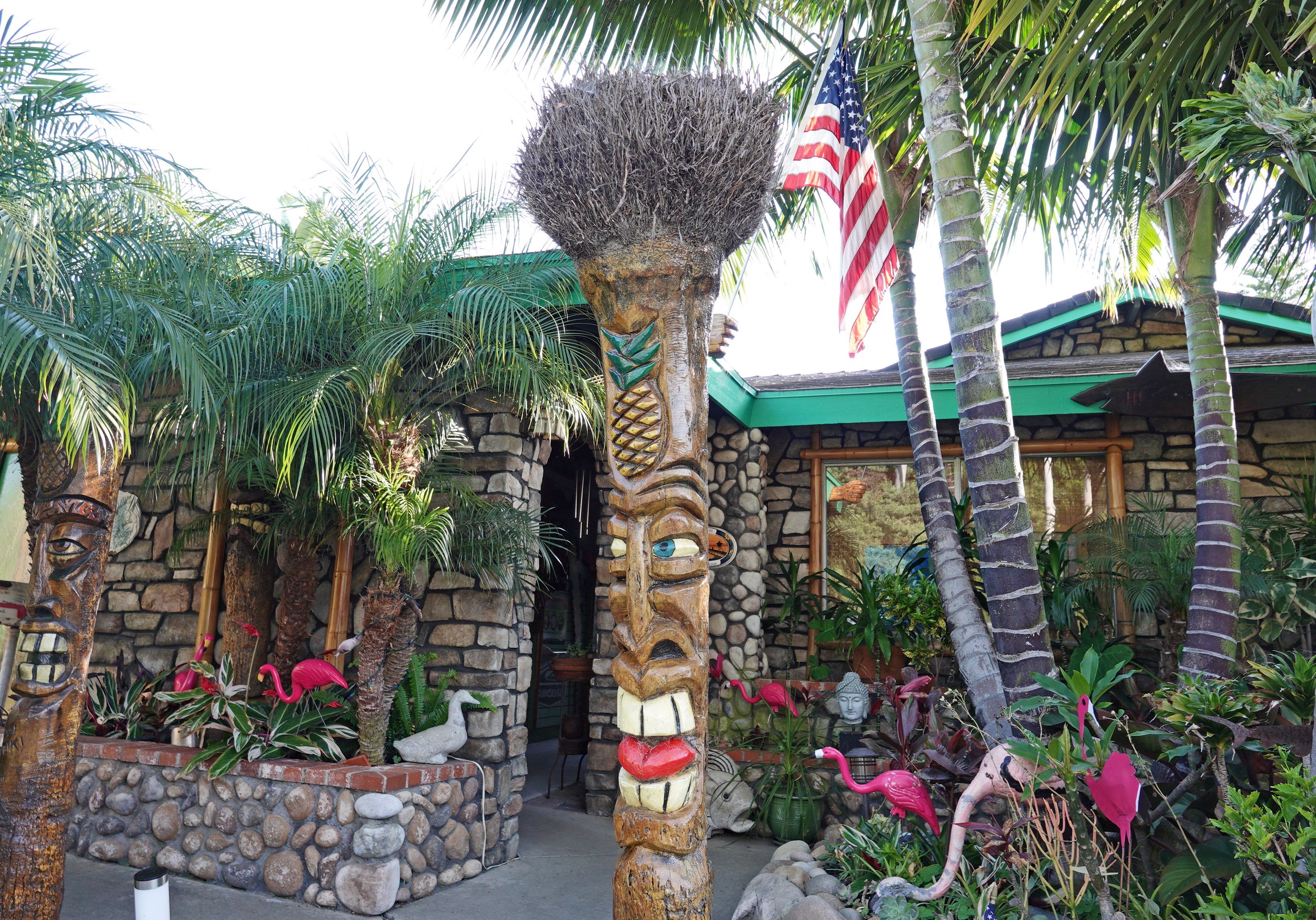 Try to imagine a beach town master-planned around a Polynesian theme.

Ole Hanson would be all for it, right?

If Ole had come along 30 years after he actually built San Clemente in 1925, visioning it as a Spanish Village by the Sea, he would have been conceptualizing his dream within a pop culture infatuated with South Sea islands.

As it turned out, tiki architecture never made a big splash in San Clemente, Ole Hanson’s sleepy Spanish village.

But if you look for tiki architecture, you’ll find examples around town, harking back to the 1960s.

A city council partnership with the Chamber of Commerce in 1962 produced the tiki-style visitor center, perched on a city-owned triangle of land—a grassy island surrounded by streets.

The beach-oriented community of Shorecliffs grew up with its own beach club, and some of the homes were tiki style, a product of American pop culture infused with South Seas mania.

Hawaii had just joined the United States in 1959, becoming the 50th state.

San Clemente came along for the ride.

In 1964, the city chose tiki style for a new clubhouse at the Municipal Golf Course, an architectural sibling to the beachy Chamber of Commerce. The clubhouse lasted more than 40 years until the city demolished it for a bigger, more versatile golf facility in Ole Hanson Spanish motif.

A sprinkling of 1960s tiki-style homes dotted San Clemente’s landscape. You can still see some today, although others may have met their demise as neighborhoods evolved. Single-story houses were often replaced by bigger, taller palaces of varied architecture.

In 2006, City Hall updated an earlier survey of the San Clemente’s historical resources. Planning Commissioner Lori Donchak asked her colleagues if tiki architecture might now be worthy of preserving, as a unique example of mid-20th century architecture.

The resulting survey identified 209 structures to list as historic resources. None were tiki. Nearly all were relics from the Ole Hanson era—1925 to 1936—when the Spanish Village’s founder mandated white stucco and red-tile roofs for all buildings.

A few selections for the list were from 1937 to 1949, when San Clemente, struggling to recover from the Great Depression, discarded Ole’s Spanish Colonial Revival design mandate to allow cheaper, more flexible architecture.

Turning to the 1950s and ’60s, the survey recommended that 16 exemplary buildings of mid-century architecture along Avenida Del Mar and El Camino Real be considered for possible future historic designation.

“These buildings provide a striking counterpoint to the soft lines and hand-crafted quality of the mandated Spanish Colonial Revival style development of the previous decades,” the report said.

Although the survey didn’t mention “tiki,” the list did include the island-style Chamber of Commerce building and a building at 550 N. El Camino Real—Pedro’s Tacos—that looks funky, maybe even tiki.

A few months ago, I was reminded of all this tiki talk when I noticed a 1960s tiki-style building at the entrance to Capistrano Shores Mobile Home Park being remodeled, converted to Ole Hanson Spanish motif.

It’s a loss, but it’s also a major improvement. It nicely complements a Spanish-style bicycle shop at the gateway to North Beach. Visually, it’s more striking than the old tiki edifice.

Donchak, who went on to serve three terms on the city council, told me the Capistrano Shores building and several other tiki-style edifices had inspired her to suggest that tiki might be an architectural element to preserve.

“We lost so many Spanish Colonial buildings because there wasn’t a sense of historic pride or guidelines,” she said, recalling the 1970s and ’80s, before the city got a handle on preserving Ole’s heritage.

She loaned me a coffee table book she’d purchased 15 years ago, The Book of Tiki, a gorgeous salute to American pop culture’s interpretation of the tiki concept—places that could be fun, enchanting, authentic, romantic or tacky. I learned that tiki culture has deep roots and passionate fans.

During the genre’s heyday, America, indeed, produced some colossal palaces of tiki. Many have not survived.

On Life and Love After 50: Which Online Dating Site is the Best for Seniors?

Historical Happenings: Unique Holiday Gift Ideas with a Blast from the Past