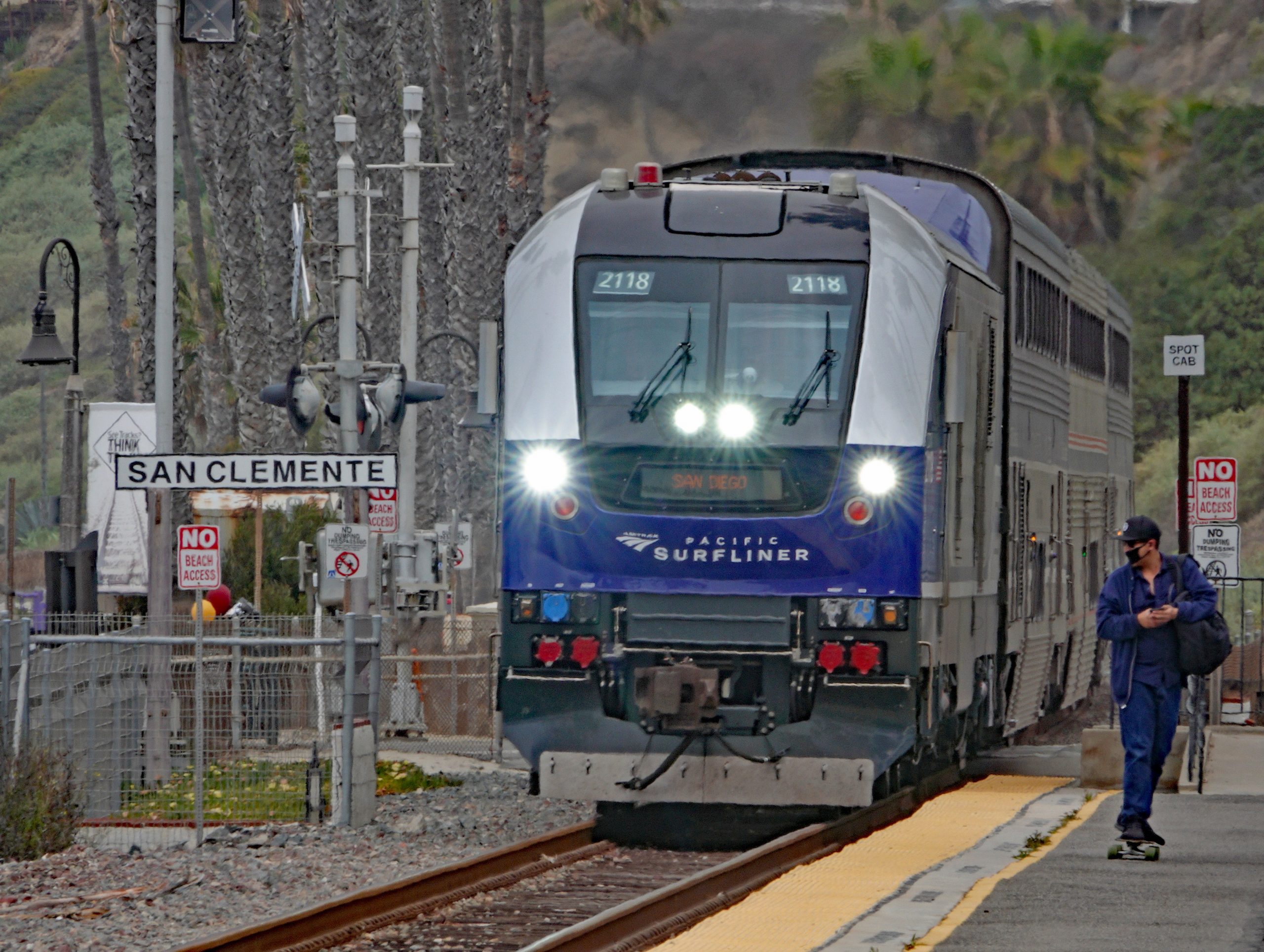 Coastlines: Trains Have Served Our Beaches for Decades

Over many years, I’ve occasionally run into a traveler walking up to the Amtrak train stop at the San Clemente Pier, frustrated to realize that there are only four Amtrak trains a day that stop there.

“What’ll I do?” they’d ask, having not done their homework before showing up there, hoping to board numerous Amtrak trains anytime available from the pier.

If they’d gone to Amtrak’s San Juan Capistrano depot instead of San Clemente, they could have boarded as many as six daily Amtrak trains heading northbound or six heading southbound.

But at San Clemente’s Amtrak train stop at the pier, you could only catch two northbound Amtrak trains and two southbound, seven days a week. And the pier stop had no Amtrak ticket vending machine.

At the San Clemente Pier, there’s a Metrolink vending machine if you wanted to board a Metrolink train there to ride to Oceanside, or to San Juan or even on to Los Angeles. Of course, no Metrolink trains stop at the pier any time other than Saturdays and Sundays.

On any weekdays, you might be able to visit Metrolink’s stop in North Beach to see if you could ride a Metrolink to take you to San Juan or to Oceanside.

The best way to get much viewable rail rider information in San Clemente and to purchase tickets is for you to download an Amtrak and a Metrolink vending program on your cellphone.

On these programs, you can easily learn when to catch Amtrak or Metrolink trains and figure out well in advance what makes travel more reliable for you.

HERE’S WHAT YOU DO

Before the 2020 pandemic hassles, Amtrak used to run 11 southbound and 11 northbound trains daily at San Juan Capistrano serving Los Angeles and San Diego. Maybe some time later this year, Amtrak might bring back those daily opportunities, making a revival. Metrolink also may add more trains, too.

If you’re stuck, for right now, at the San Clemente Pier, there’s a chance to take a taxi, Uber or Lyft to San Juan’s train depot. Also, at this time of year, San Clemente’s free summer trolley from the pier can take you to the North Beach Metrolink station to try to catch any Metrolink trains you learned were available there.

Another option is you could take a free San Clemente trolley from the pier to El Camino Real. You could then take the OCTA Route 1 bus from El Camino Real, near North Beach, north to Dana Point and then switch onto Route 91 inland and into San Juan’s Amtrak and Metrolink station.

It seems odd that so few of the scenic Amtrak Pacific Surfliner trains running from San Luis Obispo to San Diego make stops at the San Clemente Pier.

How many places can you step off California’s Amtrak train as nicely as what we have here in San Clemente, right directly at the pier? It would help if Amtrak had more train stops at our pier. Occasionally, I’ve seen them doing it during summer months.

Spending a summery day in San Clemente, you can swim, dine on the pier, or at any of several Pier Bowl eateries. Or walk uphill to see historic Casa Romantica or explore Downtown San Clemente’s shops and restaurants.

To tourists from all over America who might be staying anywhere in Los Angeles or San Diego during vacation times, or say, in Disneyland-area hotels in Anaheim, Amtrak could promote making Amtrak journeys to the San Clemente Pier.

Metrolink already has many San Clemente day trips, which generally can be crowded with people who reside in Orange County, Los Angeles or the Inland Empire. But if Amtrak had more San Clemente stops, this could be a popular place for Amtrak to try to promote.

Amtrak already does have ads and commercials that picture the Pacific Surfliner traveling between San Luis Obispo and San Diego, often featuring a scenic stretch of coastline in San Clemente.

I recently ran across an article I wrote in 1999 titled “Amtrak pulls out of San Clemente.”

Amtrak, which then had been stopping just once per day at San Clemente in each direction, discontinued that stop on Nov. 1, 1999, citing low ridership, the article said. The article told how after a 60-year history, Santa Fe streamliners had been followed by Amtrak trains.

Fortunately, the 1999 discontinuance proved to be only in winter. And eventually, year-round, twice-a-day stops resumed.

In 1969, San Clemente’s Chamber of Commerce had launched a campaign to try to move the coastal railroad tracks inland, bypassing San Clemente and our beaches. It never got anywhere.

In the 1990s, after Metrolink began serving San Clemente with commuter trains, local entrepreneurs Rick Anderson and Jerry Lehman worked with Metrolink, OCTA and the Riverside County Transportation Commission to launch what then was a novelty, known as “the Beach Train” on weekends.

It proved so popular that Metrolink broadened its weekend leisure service systemwide.

Metrolink trains and Amtrak trains both do help visitors to visit our beaches, our pier and our downtown, especially in summer, when the city’s free trolleys helped visitors get to see more of our town.

Maybe one of these years, Amtrak might decide to help give visitors more hours to hop off at the San Clemente Pier and to let them get back on the train to head back with more scheduled options, all seven days a week during summer seasons.

Fred Swegles grew up in San Clemente before the freeway. He has 50 years’ reporting experience in the city and can be reached at fswegles@picketfencemedia.com