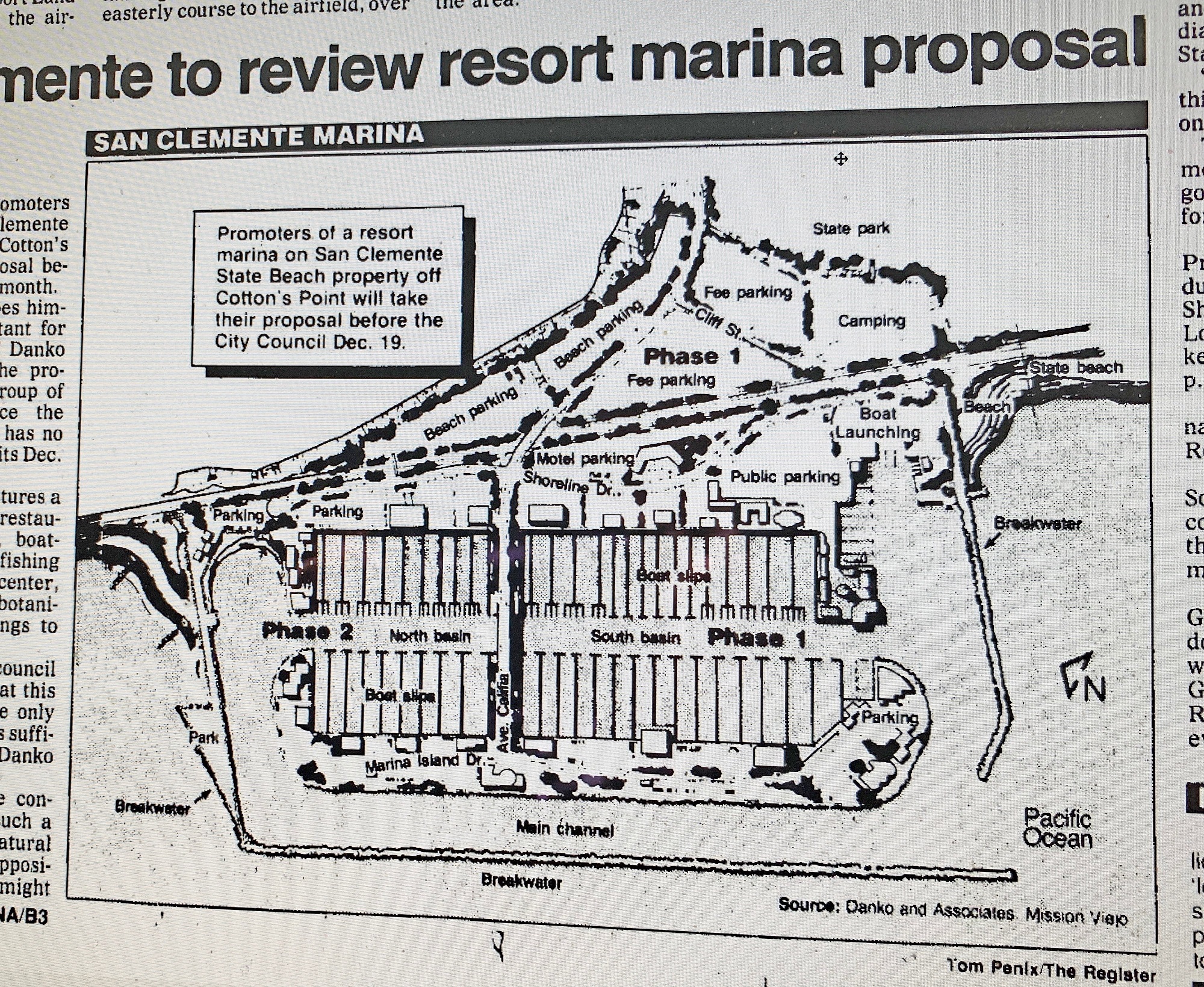 San Clemente founder Ole Hanson’s 1928 vision of building a breakwater from the end of the pier over to Seal Rock wasn’t the only proposal for a boating marina in town. But it probably had the best chance of being built, back in his day.

Rules for building harbors have only grown more complex in decades since. And Ole’s concept looked pretty simple—just a long jetty to provide safe anchorage for small boats.

It’s always possible he had grander visions but never got to pursue them. Barely a year later, America’s stock market collapse of October 1929 put the skids on the spectacular growth that Ole’s Spanish Village had enjoyed in 1926, ’27, ’28 and ’29.

In 1930-31, Ole hyped Southern California real estate as an exceptionally solid investment in tough times nationally. He thought the Spanish Village he’d launched in December 1925 could ride out the crisis, then resume growing.

But by 1933, his town was struggling mightily. Bank foreclosures forced him to leave in 1934.

Ole died in Los Angeles in 1940, never seeing San Clemente’s subsequent growth, no longer as a distinctively Spanish Village. In 1947, a new idea was floated for a boat harbor that would have stretched from Dana Cove to San Clemente’s train depot beside the city pool.

A TALE OF TWO TOWNS

“Like islands,” the three breakwaters “would create open anchoring areas” between Dana Point and San Clemente, historian Doris Walker wrote in her book The Heritage of San Clemente.

As described in the 1949 San Clemente telephone book, published by the Chamber of Commerce, the idea for San Clemente was that the three jetties could take advantage of a natural chain of offshore reefs between Dana Point and San Clemente.

The Chamber didn’t say how many boat slips or what else Dana Point’s harbor would have had.

The Chamber noted that San Clemente’s marina would be the only harbor directly along the railway corridor from Los Angeles to San Diego. San Clemente’s tiny train depot was already in place, and Walker’s book said the concept included a multi-modal transportation depot between the RR tracks and El Camino Real at Avenida Pico.

“A spur track would run way out to sea,” Walker wrote, “enabling even larger ships to unload cargo.”

The Korean War delayed federal consideration of this harbor proposal, Walker wrote, and a San Clemente marina “was passed over” in the 1960s when development of Dana Point Harbor won approval.

“Then in 1984, another proposal for a marina sailed into the city,” Walker wrote.

Developers based in Mission Viejo said they had financial backing for a resort marina at Calafia Beach.

“A 300-room hotel, restaurants and shops were to be included along with 3,000 boat slips,” Walker wrote. “The marina plan itself closely resembled that of Dana Point Harbor.”

Partners in the endeavor showed city staff their concept, and when word got out, local surfers launched petitions opposing the marina.

The city council was to receive an overview on Dec 19, 1984 for discussion only. The proponents wanted to hear how the city felt about it. The city, wanting to gather more information, postponed that discussion.

DEBATE OVER THE MARINA

San Clemente police officers Paul Falk and Vern McGarry, both avid surfers, mobilized opposition. They were quoted in the Daily Sun-Post, as wasJim Kempton, a city planning commissioner and Surfer  magazine editor who said, “There will be 4,000 surfers at the city council at a drop of the hat.”

Earl Smith, a financial planner for the marina proponents, told the Daily Sun-Post, “We welcome the surfers’ input. I would not consider coming here without being familiar with how people feel. I want to talk to them, because if they can get that many people to a council meeting, I want them on my side.”

“An emphasis on respecting the ecology to enhance the area is very doable,” he said. “If we can do something that is acceptable to the people of San Clemente, people will come from all over the world to see it.”

Smith suggested the marina could be an ecological Disneyland.

Avenida Calafia would have offered direct access to the marina from the I-5 Freeway, crossing over the railroad tracks and extending out into the ocean onto Marina Island Drive.

On the sketch, it looked as if beach parking would have been placed where the current parking lot is. It also appears that Calafia’s sandstone bluffs could have been cut back so a new street off Calafia, named Cliff Street, could lead to another parking lot and a camping area.

“The property being considered is in pretty bad shape with an unusable cliff area that is quite hazardous in its present state,” Smith told the Register. “We think that what we propose will be very attractive to both the city and the state, not only from an aesthetic standpoint but also in regard to the revenues that would be produced.

“We have had preliminary discussions with state Parks and Recreation officials, but we want an expression of interest from the city before we begin dealing with the state,” Smith said.

It wasn’t to be. Historian Walker wrote that stricter environmental laws of that time would have required 29 local, state and federal approvals.

“That appeared to be an insurmountable task,” Walker wrote, “and this marina concept also sank.”

Adoptable Pet of the Week: Bella