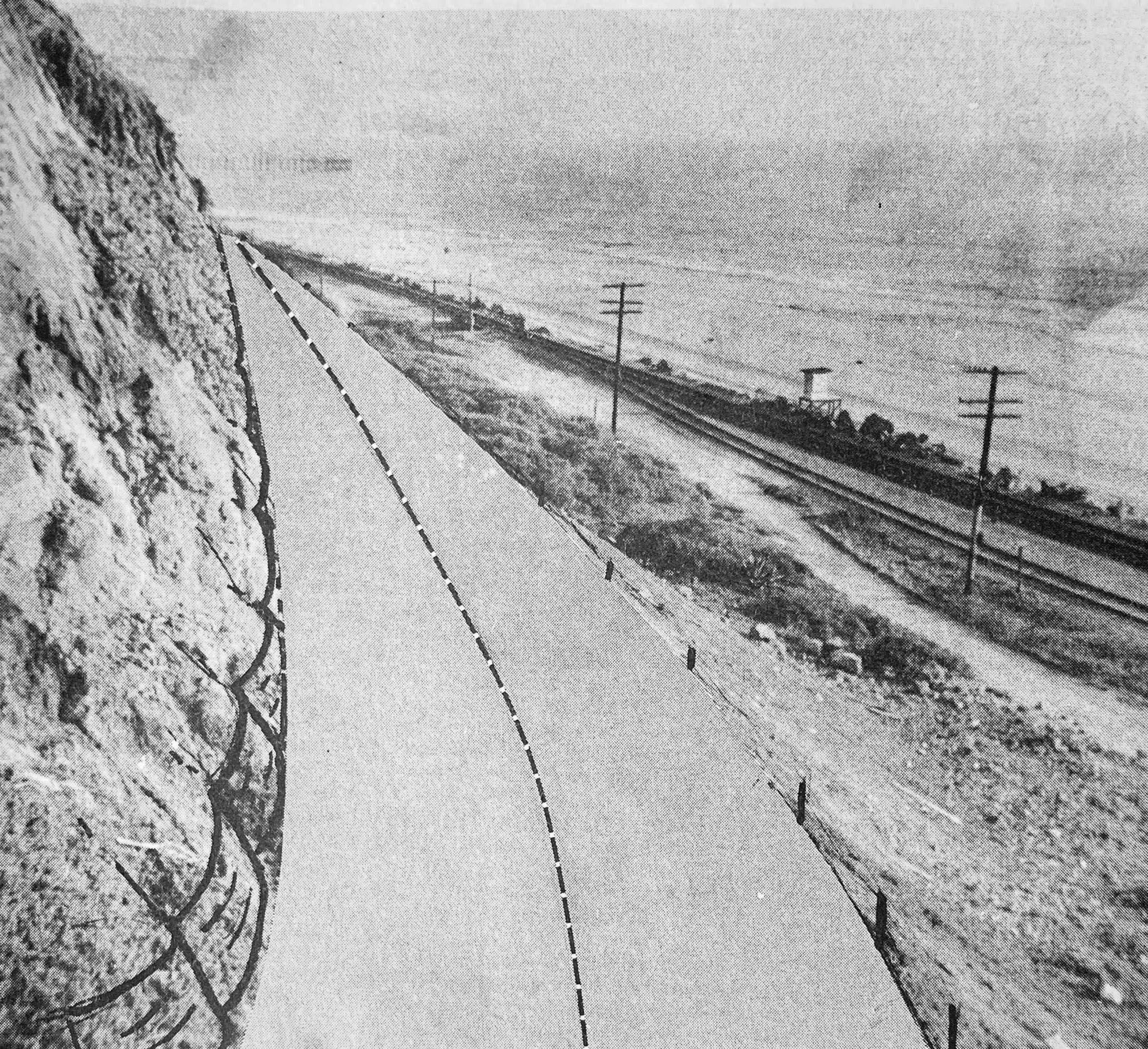 What if we had a two-lane road, instead of the Beach Trail, running from North Beach around Mariposa Point to the pier?

Fifty years ago, I wrote an article for the Daily Sun-Post announcing the city’s proposal to build a “scenic beach road.”

We published a rather simple photo illustration, showing how a 40-foot-wide road might look, perched on top of a crib wall that the city would build onto the side of the bluff.

The mile-long road would have offered one lane in each direction and parallel parking. The “scenic drive” would have been about halfway up the bluff, commanding a spectacular view maybe 40 feet above the railroad tracks.

The cost was estimated at $2.3 million including excavation, the crib wall, landfill and acquisition of about four acres of bluff property from homeowners.

A major obstacle, officials said, was a big condominium project that was then being planned along Corto Lane. It was to extend partway down the bluff, possibly forcing the scenic road there to “descend within 20 feet of the railroad’s right of way.”

Although the high cost was a concern of the city council, city staff predicted the road could pay for itself over a 10-year period if the city charged a 25-cent toll for using the road and placed 514 parking meters along the way.

Supporters said the road could be a boon to tourism, offering freeway motorists a scenic view of the ocean that couldn’t be seen from I-5.

“A thing like this, in my opinion, would gain a recognition in a sense like Big Sur,” Peter told commissioners. “People would want to drive it.”

Commissioners opined that the scenic drive would lure freeway users off I-5, taking Avenida Pico to Boca de la Playa at North Beach, leading to a coastal experience taking visitors to the pier and introducing them to our Avenida Del Mar business district.

But commissioners also felt that San Clementeans wouldn’t want to have to pay to drive the road or be double-charged by paying parking meters on it to use the beach. And they wondered if the tourist road would lead to traffic congestion on Avenida Del Mar.

The city council, skeptical of the costs and obstacles, abandoned the idea after parks commissioners lambasted it as “stupid,” “silly” and “ridiculous.”

This wasn’t, however, the first beachfront road that San Clemente had considered.

ROAD FROM CALAFIA TO LINDA LANE?

In 1963, the city hired local engineers Bill and Eugene Ayer to study the feasibility to build a coastal road from Calafia Beach to Linda Lane Beach, including beach parking and safe pedestrian RR crossings at intervals.

“All out-of-town automobiles will be subject to an admission fee of $1 per day, which includes parking,” a newspaper account reported. “Homeowners and permanent renters of San Clemente will be allowed a yearly pass costing between $5 and $10 per year. There will be no charge for use of the beach by pedestrians. However, a one-hour parking limit should be imposed on all streets within two blocks of the beachfront.”

The Ayer brothers suggested bond funding to build the road and installation of 672 parking meters along the way.

The road proposal was rejected by San Clemente voters. The concept resurfaced, only briefly, in 1995 while the city was considering building a beach boardwalk between North Beach and Calafia Beach.

COULD IT BE RESURRECTED?

Patricia Ayer, whose late husband, Eugene, co-authored the 1963 engineering study, presented the extensive study to the city, suggesting it be revisited.

As I wrote in 1995, Ayer told the city council that the main problem 32 years earlier was that cost of the road “was evidently more than the city’s population of 5,000 wanted to bear.”

A stretch of San Clemente beach—south of T-Street to state-owned beaches—was private back then. The beach would need to have been purchased by the city, then the cost of the road.

Two measures were placed before voters—purchase the private beach for the public and to build the road. The beach purchase was approved overwhelmingly; the road was nixed.

BEACH PARKING AT THE BOOKENDS

While the road from Calafia to Linda Lane never came to be, parking lots eventually were developed at each end.

The city created a grassy park with a beach parking lot in Linda Lane Canyon. Back then, Calafia Beach also was an undeveloped canyon entrance to a beach. The city, the county and the state parks department entered into a cooperative agreement to establish Calafia Beach Park.

I came across a 1968 Sun-Post article that might raise your eyebrows. It never got anywhere.

“Three levels of parking decks accommodating a total of 660 cars and a park facility at the beach are parts of a new concept proposed for Linda Lane Canyon,” the article said.

Proponents suggested that a parking structure would be much better use of the footprint than surface parking, offering more than three times as much parking than a surface lot. The structure would not disturb homeowners’ ocean views, the proponents suggested, “as the parking levels would not rise higher than 40 feet from the bottom of the canyon.”

City councilmembers referred the Linda Lane idea to the city engineer for a feasibility study and cost estimates. But I didn’t find any follow-up articles, and I don’t recall any idea for a Linda Lane parking structure from the time I began my Sun-Post tenure in 1970.