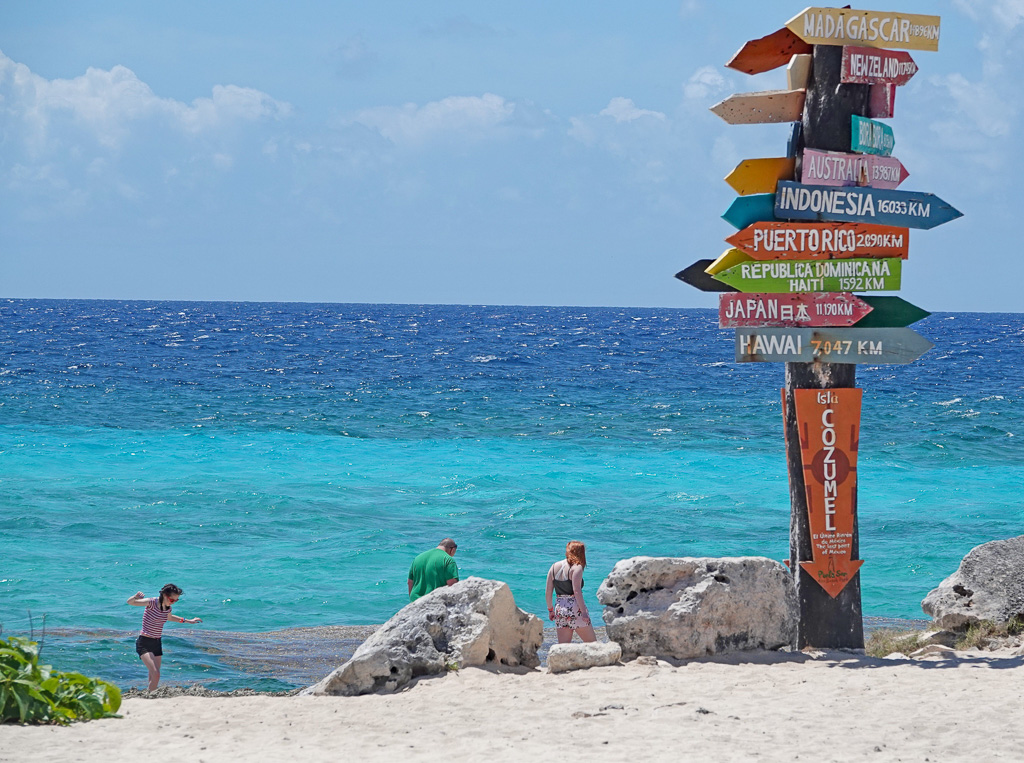 You probably never knew that one of the Caribbean’s prime cruise destinations, Mexico’s Cozumel Island, has a beach named Playa San Clemente.

Or that Cozumel also has a beach called Punta San Clemente, a few miles up the coast from Playa.

You won’t find either on most maps of Cozumel. And if you ask locals, you may have a hard time finding anyone who’s heard of either one.

Curious about my online discovery, I printed out the only two Cozumel maps that identified either. The name San Clemente appears on one or the other map, but not on both. I decided, painfully, that a visit was in order to see what I could find on this tropical island known for its turquoise waters and Cozumel Barrier Reef.

Someone had to do it. Life is tough.

The tourist office near the waterfront hadn’t heard of either. I also drew a blank on TripAdvisor’s Cozumel travel forum—not one reply in eight days of hoping for one.

I also drew a blank from everyone I asked during a five-hour bicycle ride down the island’s west coast and back. I doubly explored an eight-mile stretch where my maps told me these two San Clemente beaches had to be.

The only person who had heard of either was Griselda Pacheco at Beach Bum Bikes, near the Puerta Maya cruise port.

She rented a bike to me, and she knew “Punta San Clemente.” I wouldn’t find any roadside sign, she warned. But she helped me scrawl a crude map of a curve in the road, south of Playa Corona. There, I’d find my beach.

Both “Playa” posts pointed me to Kilometer 17.5 along the highway.

A poster who’d described Playa as a “lovely beach” said it was at Km. 17.5 but also said it was between Playa Corona and Playa San Francisco. That was impossible, my maps told me; that beach had to be Punta San Clemente, farther north.

The “lovely beach” post said Playa San Clemente “is often overlooked, so it tends to be quieter.” That sounded nice, because seven cruise ships had deposited hordes of vacationers ashore on the day of my bike ride. Most of the beach resorts seemed to be packed.

“It’s a nice beach to walk along and beachcomb, but it’s not great for swimming,” the “lovely beach” post said.

That fit what I saw at Punta San Clemente, a modest, rustic white-sand beach that admittedly doesn’t compare with Cozumel’s finer beaches. But beggars can’t be choosers. I found it.

Making two passes on my bike, hours apart, I saw just a sprinkling of tourists each time, strolling, sunbathing or entering the water carefully to snorkel, negotiating a rocky bottom.

It was tranquil. You could hear the birds. And there was a sign at Punta San Clemente—not naming it, just identifying an ecological reserve. I photographed birds in a wetland, right across the road.

Later that day, a taxi driver told me he knew of Playa San Clemente, though saying that I would never find it. You can arrive only by boat.

Cozumel is a world-class diving destination. One of its coral reefs is San Clemente Reef. The taxi driver was familiar with the diving scene. He said scuba tours don’t normally go to that reef. While it’s nice, it’s more of a beginner’s reef. Scuba fanatics visit Cozumel for more dramatic dives.

Hiring a boat to take me, alone, to San Clemente Reef just to spend a minute on a presumably deserted beach ashore from the reef was beyond my budget.

So the closest I got was Alberto’s Restaurant, where I sipped piña coladas on a beach near where I thought Playa San Clemente had to be. My queries drew a blank from restaurant workers. I took a picture, gazing north, up the beach toward where Playa SC should be.

Cozumel, fortunately for cyclists, is pleasantly flat. It’s also a pleasant isle of contrasts—crowded anywhere that cruise ship passengers gravitate during shore excursions, but deserted over long stretches. Seventy percent of the island is a reserve that’ll never be developed.

Somewhere out there, there’s still a Playa San Clemente to be discovered.

‘Island of the swallow’

It may come as a surprise that Cozumel Island, a magnet for Caribbean tourists, shares a heritage with San Juan Capistrano.

Whether you arrive by air or at the ferry dock, a large welcoming sculpture greets you: gracefully flying swallows.

The island’s name, in Mayan, is “Cuzaam luumil,” or “island of the swallows.” Legend has it that the first humans to visit observed many swallows flying over the island.

You won’t find an annual swallows fiesta on Cozumel, the tourist office affirmed. There’s no parade, no song “When the Swallows Return to Cozumel.”

But there are swallows on the island, not as many as before, I was told. They’re primarily in remote mangroves or in large aquatic caverns known as cenotes.

Searching for swallows would be a wonderful excuse for swallows fanatics to come sample the white-sand beaches, the turquoise waters and the watering holes of Cozumel.