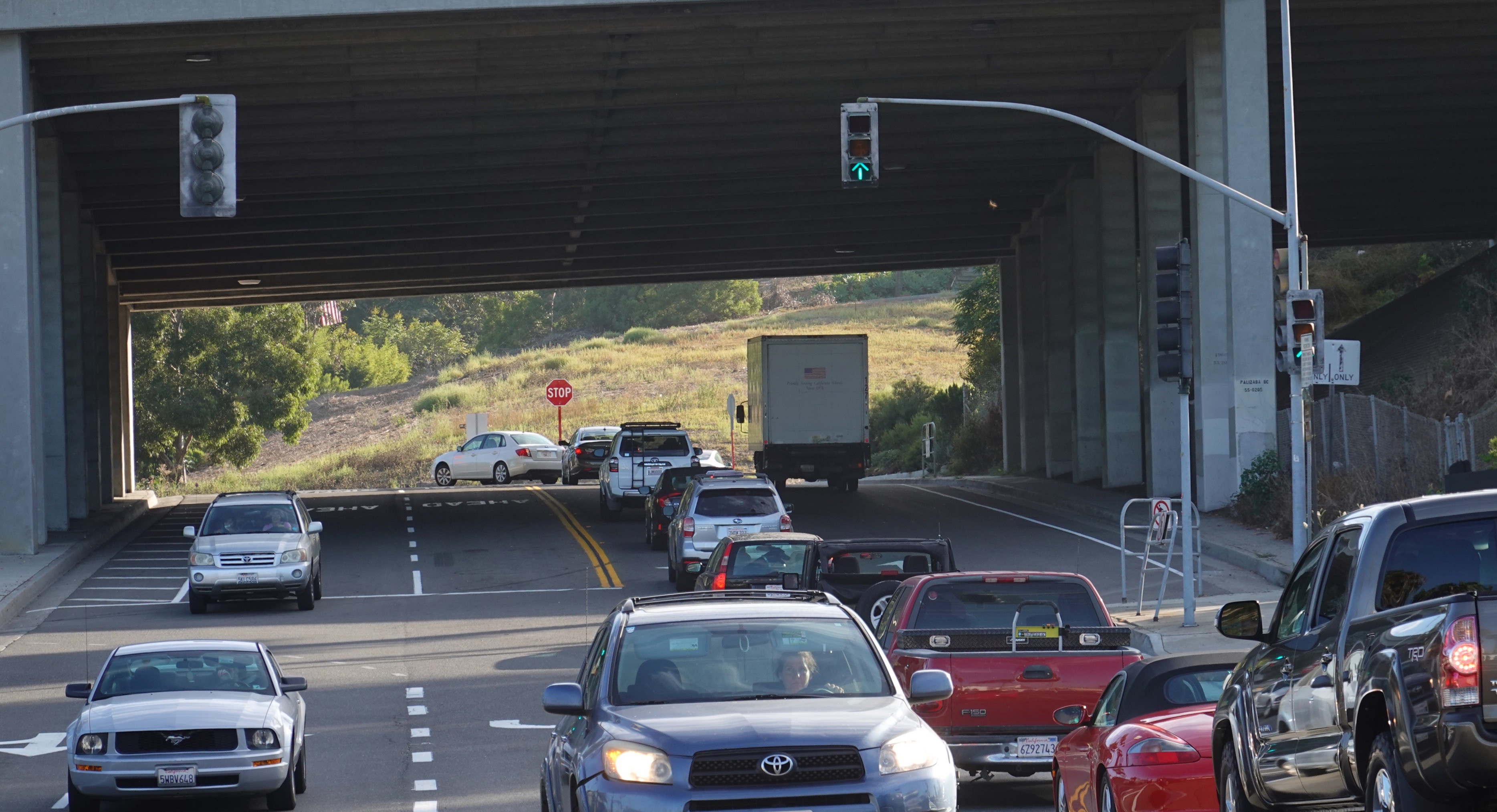 CoastLines: Is There a Way to Stop the Stop Sign?

It’s hard to believe it’s been almost 10 years since the city dedicated new sidewalks, crosswalks and a stop sign on Avenida Palizada at the northbound onramp onto Interstate 5.

November will mark 10 years of a safer way for students to walk to and from San Clemente High School, crossing that freeway onramp.

I wonder if it’s time to consider relieving those backups.

If the stop sign weren’t there, the vast majority of the time you’d have a free-flowing left turn onto I-5. Occasionally, you’d pause for oncoming traffic. Very rarely, you’d have to stop for people in the crosswalk.

It’s one of the more frustrating backups in town, compounded because three traffic signals—bang, bang, bang—form a gauntlet for anyone trying to drive, walk or bike the short distance between El Camino Real and that I-5 stop sign.

As if adding insult to injury, some people heading up Palizada to turn left onto Avenida de la Estrella don’t use their turn signal.

Drivers—most of them making a beeline for I-5—brake behind the blinker-less driver, muttering epithets. Drivers to the right of them zip by, grinning and thinking “lucky me!” Some of the epithet-mutterers will suddenly risk bolting into the other lane to try to get around the no-blinker car.

Those who bolted—and others who chose the right lane—then find themselves stuck in the right lane, approaching the I-5 underpass, staring at a Great Wall of Cars to the left of them, lined up, inching their way to everyone’s favorite stop sign. Some drivers trapped in the right lane will try to cut in, squeezing in between “Oh, no you don’t!” drivers.

Tell me you haven’t experienced this.

I asked Lori Donchak about it. She’s a former San Clemente mayor. A decade ago, she headed a Traffic Task Force, tasked with identifying “traffic hot spots” around town and finding solutions. A $262,000 “Safe Routes to School” grant from the state funded the Palizada project, including that stop sign that we all love.

Lori and her husband, Andrew, residing up the street, had ample experience there. She also was a member of the Orange County Transportation Authority board.

Lori acknowledged my query about those backups. She told me you can’t just swap out that stop sign for—say, a yield sign—which has been suggested. Caltrans won’t permit a safety downgrade.

I asked: What about replacing the stop sign with a traffic signal, programmed to be solid green except when someone pushes a pedestrian button to cross? Students using the crosswalk are only there at rare, short, predictable times.

When I asked Brenda Miller, a mobility enthusiast who helped craft the city’s award-winning Bicycle and Pedestrian Master Plan, she said it’s a perfect location to swap out the stop sign for a roundabout.

Go look. There’s plenty of room. You’d never have to stop, except those rare times pedestrians are at the crosswalk, and, at present, you have to stop for pedestrians anyway, and for oncoming cars.

San Juan Capistrano has a roundabout at the northbound I-5 offramp onto Valle Road and La Novia Avenue. When it opened in 2017, there were concerns how drivers would deal with it. I’ve used it numerous times, and it seems to operate smoothly. There’s a crosswalk, although it’s on the opposite side of the roundabout from the onramp.

Would Caltrans allow one at Palizada? I have no idea. It’s worth a try.

It’d be expensive. But who wouldn’t agree it’d be welcomed with gusto? Those aggravating backups, at times, can extend all the way to El Camino Real, even back toward Ola Vista. And it will only get worse.

And it’s just as bad, or even worse, getting off I-5 toward ECR.

Swapping out the signals at Estrella and at El Camino Real for roundabouts would be a challenge, if you carry that concept further. Space is tight. But Brenda Miller suggests roundabout islands don’t have to be big, and they could replace aggravating backups with slow, steady flow.

She said she can envision a far-reaching approach, redesigning El Camino Real all the way through town to replace stop/go, brake/accelerate with even flow, so you could avoid having to stop at all, whether in a car, on foot or on a bicycle, from North Beach to Cristianitos.

That concept is consistent with the mobility visions in our San Clemente General Plan, which promotes multi-modal solutions. If properly engineered, vetted for traffic flow, safety and parking and shown to be feasible, a succession of roundabouts would remake downtown San Clemente. That’s a lot to grasp.

Then again, doing nothing, ECR traffic will only get worse in years to come. Who wants that?

The Palizada gauntlet is an epicenter. Replacing the stop sign on Palizada at I-5 could actually be a good stand-alone project, maybe even a demonstration project for rethinking the rest of that gauntlet.

Letter to the Editor: Response to ‘Council Strikes ‘Sanctuary for Life’ Resolution’