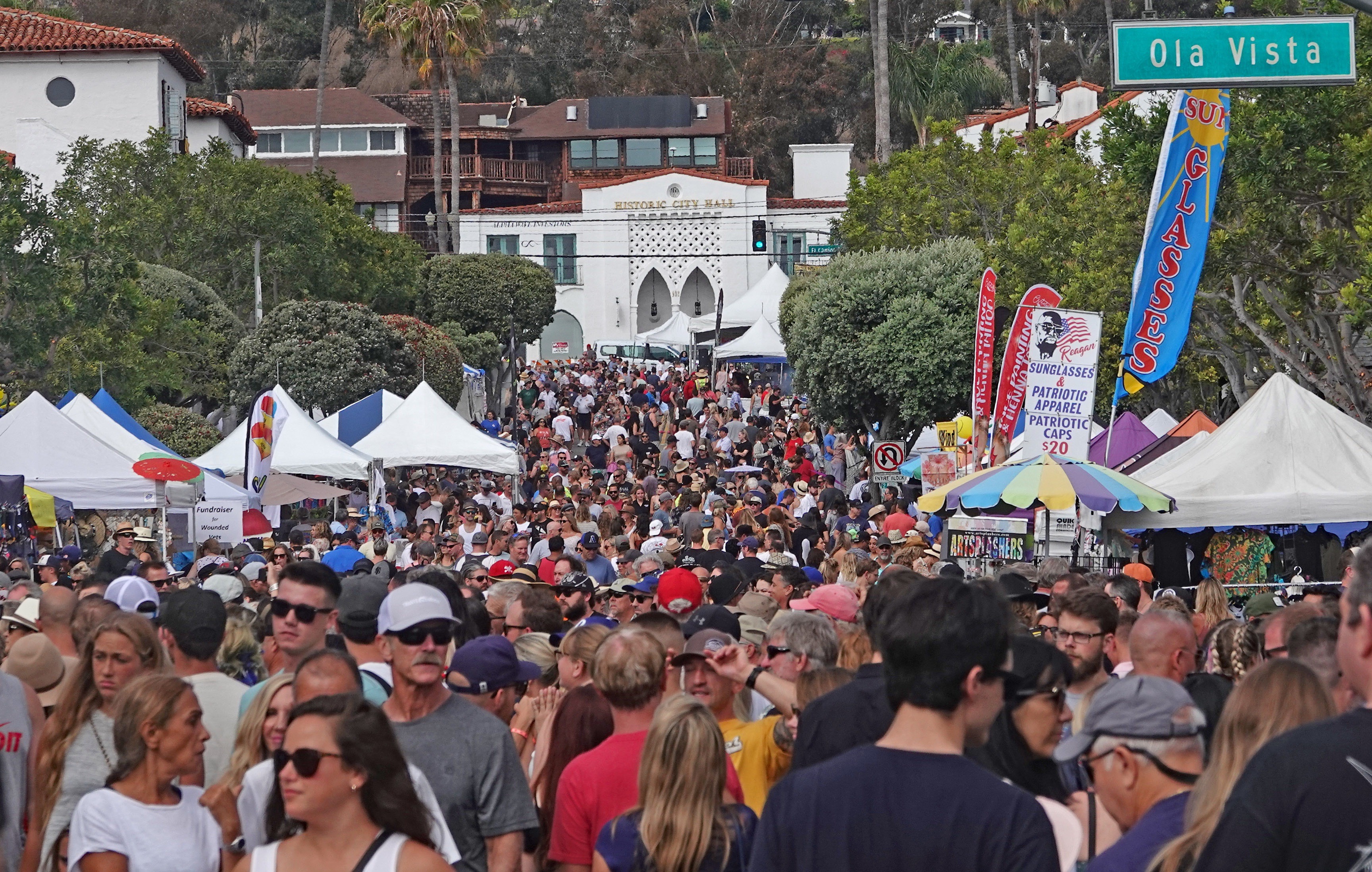 CoastLines: How We Went from Fiesta to Music Festival

Every year, after our San Clemente Fiesta Music Festival, I hear nostalgic comments to this effect: Why can’t we dispense with this massive party and just go back to our original folksy parade and carnival, held for more than 30 years?

I’m pretty sure I attended the first Fiesta, in 1954. I was too young to remember. I appeared in the parade several times. I attended the three-day carnival in Plaza Park pretty much every summer while growing up.

My favorite year, music store owner Leo Fessenden rented a flatbed truck and a generator, so my high school rock band could perform classic 1960s rock, live, in the parade.

There seems to be some confusion about how we went from a parade and carnival to a music festival on Del Mar. So I went to the San Clemente Library to refresh my memory from newspaper archives.

The fiesta originally was called “La Cristianita” (The Little Christian) to commemorate California’s first Christian baptism, performed in 1769 by Spanish priests in the hills behind what is now our town.

Some local residents created a La Cristianita Pageant to dramatize that July 22, 1769 baptism. The Chamber of Commerce organized a summer fiesta to go with the pageant.

It continued, every July, through 1985. That year, the carnival was marred by gang activity. There was also some neighborhood pushback over carnival impacts. The newspaper reported that a neighbor was caught using bolt cutters to shut off a rock band’s electricity.

In 1986, the carnival was replaced by a block party on Del Mar. The traditional parade route was reversed, starting at the park and ending downtown, where the block party would begin. Some people grumbled, because the Chamber charged admission to the block party to defray entertainment costs.

The Fiesta and Ocean Festival were tag-team events. The parade and block party took place July 19, 1986; the Ocean Festival, the following weekend. The city was just finishing up a $1.4 million renovation of the Avenida Del Mar streetscape, so the block party helped celebrate that.

In 1987, the chamber offered free admission to the block party. The pageant had problems and was shelved.

By 1989, July in San Clemente was pretty nonstop with entertainment. The city presented its July 4 fireworks on a Tuesday, leading right into the Ocean Festival, Friday through Sunday, July 7-9. From July 12-16, the Professional Surfing Association of America presented a pro/am surf contest at the pier. On its final day, Sunday, July 16, the Fiesta block party was up the street.

In lieu of a parade, El Camino Real swelled with runners and walkers for a “Fiesta 5000” 5K event in the morning, transitioning into the biggest block party yet. No admission fee. The chamber secured sponsorships, the headline band was The Coasters, performing such 1960s hits as “Poison Ivy” and “Love Potion No. 9.”

The block party grew from there into today’s music festival. Nonprofits that had food and game booths at the former carnival had them on Del Mar.

This year, the Rotary Club served up its corn on the cob, as usual. The good ol’ carnival is gone, but now the Friends of San Clemente Foundation produces a bigger one, for charity. This year’s is Oct. 10-13 at Vista Hermosa Sports Park.

I’ve heard old-timers say they’ve stopped attending the Fiesta because it’s too crowded, or it has evolved into a drunkfest, and the event should be moved to the sports park or ended.

I attended this year’s event in the morning, when there were no crowds, then returned for the most crowded time, after 3 p.m. Both times, it was nice seeing local bands getting exposure, kids enjoying the bungee ride, water slide and others. The Knights of Columbus was besieged with fans of its tri-tip sandwich for charity. There were contests, from ice cream eating to a diaper derby.

Wigs & Ties, a local band, put on a good show. So did the grand finale, Born on the Bayou, doing Creedence Clearwater Revival songs. I focused my camera on people in the audience. I was pleased to see people young and old, singing along to Creedence. I saw lots of happy faces, well-behaved, at least while I was there.

No, the music festival isn’t the Plaza Park Carnival of my boyhood. Should it be relocated, abolished or reformatted? Or does this event, warts and all, have its place, one day of the year? I’ve heard both viewpoints. I can understand both.

It was nice growing up in San Clemente when I did. Our town is pretty nice now, too—not the same, but, hey, that makes memories sweeter.

Health & Nutrition 101: Self-Care Through the Holidays

Letter to the Editor: Ban on Gas-Powered Leaf Blowers