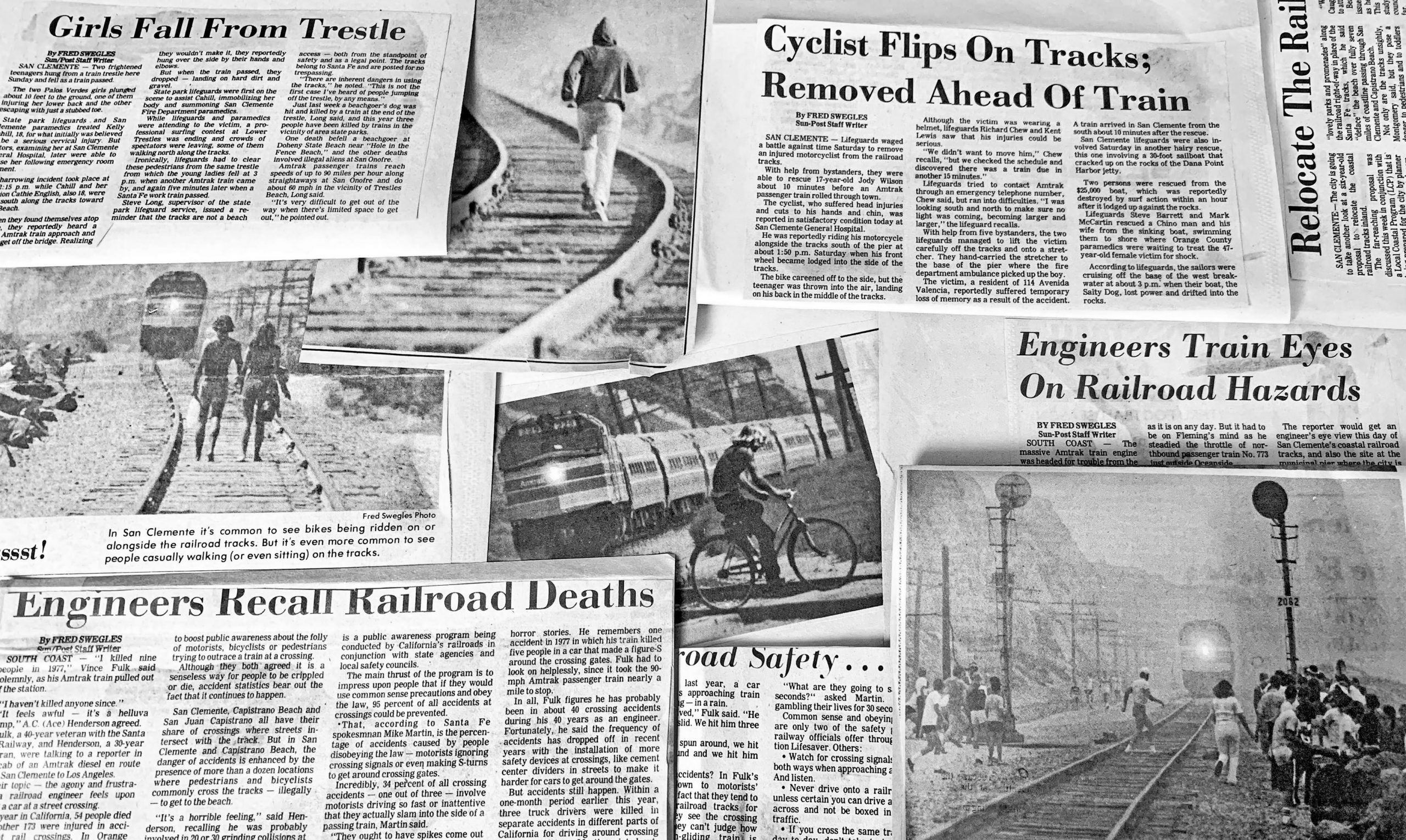 Imagine you are operating a locomotive. You spot someone standing on the track ahead of you, or, say, walking with headphones. You can only pray the person will step aside in response to the horn.

It can take some trains a mile to stop in an emergency, says California’s rail safety campaign, Operation Lifesaver. And that’s whether it’s train vs. car at a railroad crossing or train vs. a pedestrian trespassing on the tracks anywhere.

“There’s nothing you can do about it,” veteran train operator A.C. Henderson told me, as I stood in the cab of an Amtrak train traveling from San Clemente to Los Angeles.

“It’s a horrible feeling,” he said. “All of us experience it at one time or another.”

He said he’d been involved in 20 or more collisions at train crossings over a 22-year career operating trains.

I was riding a northbound train with Amtrak’s southwestern U.S. road foreman—Henderson—and with Vince Fulk, the engineer operating the Amtrak that day.

I was gathering information for a safety article, 40 years ago.

Safety has since improved at RR crossings nationwide. Fencing has been added at key locations. And safety-minded amenities have been developed, like San Clemente’s Beach Trail.

Occasional tragedies still occur, just not as often as decades ago. Collisions with vehicles at crossings nationwide, for example, have reduced by 82% since 1972, Operation Lifesaver says, from 12,000 annual incidents then to 2,200 in 2018.

There’s been dialogue in San Clemente about train horns since November, when a five-year Federal Railroad Administration reprieve from required sounding of horns along San Clemente’s Beach Trail expired.

San Clementeans had grown accustomed to not having to hear 28 horn blasts routinely at the trail’s seven pedestrian crossings. That’s why it was shocking to hear routine horns again, day and night.

The Beach Trail was built from 2006 to 2008 to improve safety along a seaside rail corridor that the public had used for 80 years as a beach access, crossing at random.

The idea for a beach trail came when Metrolink launched commuter rail service in Orange County and RR police began ticketing trespassers. There was a public backlash.

So, the city set out to try to curb trespassing by creating a pleasant, scenic, fenced pathway people could use to walk parallel to the tracks, accessing the beach only at safety-equipped crossings.

Until 2006, trains passing through San Clemente and across America only sounded their 112-decibel horn when engineers spotted danger ahead. In 2006, a new federal rule required four routine horn blasts by every train approaching every crossing in America.

That just happened to coincide with construction of San Clemente’s Beach Trail. With that, seven pedestrian RR crossings opened along 2.3 miles of track.

Successive horn blasts from one crossing to the next jolted San Clemente’s placid beach vibe and nearby neighborhoods’ tranquility.

San Clemente—like other communities—applied for horn-blowing waivers. The FRA offered waivers in return for safety upgrades at crossings, beyond what was already in place.

The city appears to have passed a federal inspection in January. A quieter rail corridor could resume this spring.

All of this reminded me of my 1981 conversations with Henderson and Fulk. My topic for that news article was Operation Lifesaver. In San Clemente, the nonprofit posts banners at beach trail crossings reminding pedestrians to “think train” and “look both ways.”

My 1981 interview with Henderson and Fulk wasn’t the first time for me.

Earlier, I’d ridden another Amtrak train from Oceanside to Santa Ana to get an engineer’s eye view of safety hazards commonly seen along the way. I had some knowledge, from stories I’d covered through the 1970s.

“San Clemente is one of our trouble spots,” Engineer J.R. Fleming told me.

Indeed, train incidents appeared more frequently on San Clemente news pages then than they do today.

“People walk down the track or across it just like it was a sidewalk,” said J.E. Thornton, foreman for all trains plying this track.

“You should come down through San Clemente in the summertime,” he said. “It’s nerve-racking.”

“What scares you,” he said, “is these kids you see playing chicken. They just don’t realize how fast that train is traveling.”

“As long as there’s a means of keeping people off the track, then people won’t get hurt,” Thornton said.

In 2016, when the horn-blowing waiver went into effect, San Clementeans were asked to protect the tranquility that the city’s safety upgrades had earned—respect the fencing, don’t duck under lowered RR crossing arms, and ask any trespassers you see to please get off the tracks, not just for their own safety but to not ruin a good thing for all of us.

— 1,081 deaths or injuries to pedestrian trespassers occurred nationwide in 2019.

— Don’t get too close; trains overhang the rails by at least three feet.

— It takes so long to halt a braking train, it’s unlikely it can stop in time.

— Never walk, run or cycle on tracks, in bridges or tunnels.

— Stay alert around RR tracks. Refrain from texting, using headphones or other distractions.

— Selfies on or around tracks can be deadly. More than 20 deaths or injuries since 2011 were photography-related.