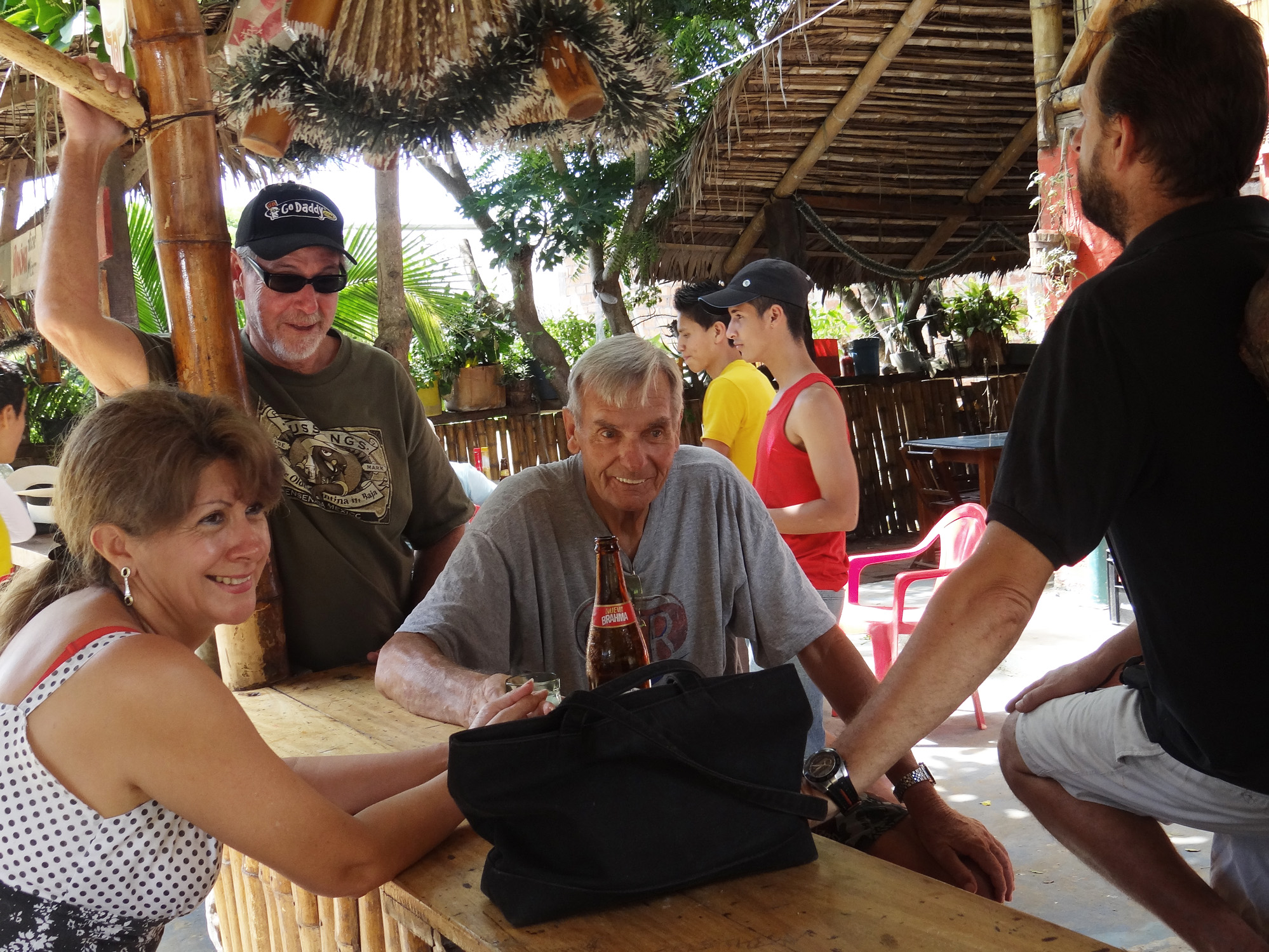 How does one become a proud resident of two beach towns known as San Clemente, 4,000 miles apart?

He is one of the most memorable characters I’ve known. I’ll share his story this week. Both San Clementes lost him, on Aug. 5, to the coronavirus.

Born in Germany in 1936, Heinz emigrated to Canada in 1957, ran out of money during an adventuresome 1960 trip through the United States, Mexico and Central America and wound up in Los Angeles, working for Continental Airlines as a chef.

In 1961, at a church social, he met a young lady from Ecuador. They would marry in December 1962. Heinz and Maria raised three children for 13 years in California, then decided to seek a slower pace of life.

They moved to Ecuador, near Maria’s family, operating a restaurant and a catering service.

One of their favorite places, which they’d discovered during a 1964 visit, was a tiny fishing village a few miles south of the equator:

While residing high in the Andes in 1975, the Neidls would take sons Mark, Andrew and Matthew to the tropical beach at San Clemente. In 1977, they built a modest wooden house on the beach.

Maria’s sister, Beatriz, was in California. She married an American, William Curt. In 1968, they settled in California’s San Clemente. The Neidls would visit them.

Mark Neidl grew to like our San Clemente so much that he and wife Isabel made it their home in 1984. Heinz and Maria reapplied for U.S. residency so they could enjoy extended stays and Heinz could play grandpa to Alex and Zach.

After Heinz lost his wife, Maria, to cancer in 2006, he became a long-term resident of both San Clementes with newly earned U.S. citizenship.

Now “they can call me Gringo in Ecuador!” he joked.

In 2007, I wrote in the San Clemente Sun Post News about five San Clementes I’d visited — Spain, Italy, Argentina, Ecuador and the Philippines. A reader reached out to me, informing he was a man of two San Clementes. I was stunned.

With an interview, I introduced Heinz to readers here. He’d need no introduction in his other San Clemente, a town of 2,000 where pretty much everyone knew everyone.

I informed readers, in a follow-up column, how I had discovered Ecuador’s San Clemente during six months exploring Central and South America in 1974. Heinz and I swapped stories about the town. He urged me to revisit. I did, in 2012. The result was my third story about Heinz and how this other San Clemente had evolved, still a tiny village.

Imagine my surprise, meeting Heinz’s next-door neighbor there. Richard Cannon was a childhood friend I hadn’t seen since he and I attended grades 7-8 together at Concordia School in 1961-62. Richard had then moved away.

Heinz rebuilt about 100 yards inland, He continued to reside there until his passing. In a Facebook post, Richard Cannon disclosed that he had found his best friend, Heinz, at home, unconscious, barely breathing.

“Once at the hospital, he was put on a ventilator,” Isabel Neidl informed me. “He had suffered a stroke and tested positive for COVID. He had many health issues that made it difficult for his body to fight the virus or wake up.

“He was a wonderful grandpa, father, husband, brother and friend. He was very loved and will be missed.”

Faithful friend Richard, who has tested negative, wrote this: “Life in San Clemente won’t be the same without him . . . many here will miss him . . . he was quite a character.”

I reviewed my previous articles about Heinz and a slideshow biography that grandson Zach had compiled several years ago as a Boy Scout project.

I realized that Heinz, as a young boy, had survived World War II in Germany. At war’s end, he was 9, food was scarce, and he fondly remembered an American soldier’s kindness, handing him a donut.

Heinz completed basic schooling, did a three-year apprenticeship at brewing beer and served two years in Germany’s Navy, Rhine River patrol. In 1957, he applied for immigration to Canada, working in the food service industry, then in 1960 embarked on an international adventure with two friends.

In 2012, Heinz introduced me to local beers at his watering hole in South America’s San Clemente, so when San Clemente’s Left Coast Brewing Co. opened a tasting room, I eagerly took Heinz there to sample a dozen brews.

Heinz took Left Coast souvenirs back to Ecuador’s San Clemente to share with other expatriates at the watering hole where they met daily.

I will miss Heinz, his good cheer and his sense of humor.

Things came full circle, one evening eight years ago, when Heinz invited me to join him in the stands at San Clemente High to watch his grandson, Alex, play basketball.

An unforgettable moment. Here’s what I wrote in the Sun Post News:

At San Clemente High School, they call him “Train.”

For four years, Alex Neidl, who has grown up with cerebral palsy, has been student manager of the varsity basketball team, asking each year if he could step off the bench and try out for the team.

“He’s got some deficits,” said the Tritons’ coach, Marc Popovich. “None of those things ever stop him. He’s got such a great spirit. He’s just so much fun to be around.”

On Thursday night, in the varsity team’s final game of Neidl’s senior year, he was in the starting lineup against Dana Hills High in San Clemente High’s gym. When his name was announced, the floor shook with the crowd’s thunderous applause.

The tipoff went to the Tritons. The ball went to Neidl, then into the hoop. The gym erupted.

The ovation continued after Dana Hills scored (uncontested) to tie the game. San Clemente High called timeout, and Neidl returned to his role on the bench as team manager.

“It was pure joy,” his father, Mark Neidl, said up in the stands. “I couldn’t contain myself. I had a couple of tears coming down my eye. I never thought this day would come, and thanks to the whole staff, to San Clemente and to everyone here. We’re extremely grateful and very proud.”

On Life and Love After 50: Should We Go?

Adoptable Pet of the Week: Anders