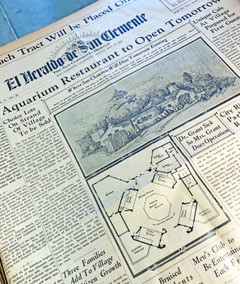 CoastLines: What Happened 90 Years Ago in San Clemente?

From 1926 to 1930, Southern California’s fashionably growing “Spanish Village by the Sea”—known as San Clemente—was evolving as a resort-like community.

So as 1931 began, the biggest headline in the El Heraldo de San Clemente local newspaper announced the construction of San Clemente’s train station on a seaside spot that today is known as North Beach.

Right across from the train station was San Clemente’s landmark beach club. And facing the highway, a fashionably designed restaurant was being built—known as The Aquarium Café—at an address known today as 1814 N. El Camino Real.

This year—90 years after 1931—a new restaurant with a stylishly refurbished interior of the historic building opened in May 2021, known as Landers.

On Jan. 2, 1931, construction began on a $10,000 Spanish-type train depot, designed to be “the first station on the ocean of the Santa Fe system … built on the sands of the beach” between Los Angeles and San Diego.

The newspaper insisted that San Clemente would continue to grow in spite of a national 1929 stock market collapse across America.

“A piece of land is a solid thing that no stock market crash, no failure, can erase,” the local paper said, suggesting buyers invest in real estate at San Clemente.

State authorities announced that a $382,500 project will “eliminate one of the worst roads in the state, a road on which many people have met death,” between San Mateo Creek south of San Clemente, north to the village of Serra (known today as Capistrano Beach), stretching 5.46 miles, widening the highway.

Hanson announced a plan to develop a possible beachfront strand, north of the North Beach’s San Clemente Beach Club. It would establish beachfront sites along three-quarters of a mile with groins to be built out into the ocean and 60,000 square yards of sand. The plan was to take dirt from the palisades where work crews were to be cutting into the bluffs to widen the highway, establishing a wider beach.

And then the Aquarium restaurant became famous for San Clemente, opening in May 1931, including a maple dance floor, surrounded by dining spaces and four large fish tanks. “Fish dinners and sea foods will be the cafe’s specialty.”

“Another Spanish Village business enterprise gets under way tomorrow, when the Aquarium Cafe on the state highway near the Beach Club opens for business. The owners of the unique restaurant have expended much money in building their establishment. May success be theirs.

“Citizens of the city should attend the opening. A restaurant with a dance floor, twelve glass tanks in which colorful fish swim, color and atmosphere will greet you. We believe the idea of an aquarium cafe specializing in seafood a good one, one that if handled right should prosper. A trip to the cafe will repay you in food besides giving you a picture of what enterprising minds can do in a business way.”

“Try a Shore Dinner at the Aquarium Cafe, San Clemente’s unique restaurant on the state highway opposite the Beach Club,” the ad said. “The Aquarium Cafe specializes in sea foods. A noted chef caters to your wants. All kinds of fish served for your taste. Come to the Aquarium Cafe for an enjoyable luncheon or dinner. Twelve salt water tanks contain colored denizens of the deep. A marvelous dance floor awaits you.”

September 1931 announcement: Aquarium Cafe Now Serving Steaks, Chicken: The Aquarium Cafe, the unique seafood restaurant at San Clemente, announces that in the future it will serve steaks, chicken, ham and eggs, besides its regular fish menu.”

AND SUMMER HEATS UP

In June, San Clemente recorded its hottest day, hitting 97 degrees, two degrees higher than in the history of the city’s weather bureau.

Hanson, who had started up San Clemente in December 1925, and directed the village’s design and growth, was injured on July 15, 1931, while walking downtown with Hamilton Cotton, his friend and San Clemente’s financial magnate.

“Ole Hanson and Hamilton H. Cotton were struck by an auto early Wednesday evening on Del Mar and narrowly escaped serious injury, if not death,” the newspaper reported. “Hanson is in the San Clemente Clinic and Hospital under the care of Dr. Garnet R. Grant, suffering from a broken collar bone, cracked shoulder blade, cut left leg and other minor injuries. Cotton escaped with only minor cuts, bruises and shock.”

“The two men, engaged in conversation, were crossing Del Mar when a heavy car driven by Mrs. Lita Blocker of San Clemente, hit them,” the newspaper reported. “Cotton was hurled ten feet to the pavement, unconscious. Hanson, struck by the fender, went down in a heap. Mrs. Blocker applied the brakes on her car and stopped the machine before she ran over the two injured men. Her quick action, and the fact she was not speeding when she turned into Del Mar off the state highway, saved Cotton and Hanson from more serious injury.”

“Mrs. Blocker stated she did not see Hanson and Cotton, and they say they did not see or hear the approaching car until it struck them. Spectators declare the accident appears unavoidable.”

Cotton escaped severe injury. Hanson “will be forced to curtail his activities for at least two weeks,” the newspaper said.

“Ole Hanson, who suffered a broken collar bone, cracked shoulder blade, injury to the left leg, cuts and bruises when hit by a car when he was crossing Del Mar, was removed from the San Clemente Clinic and Hospital to his beach front home Tuesday morning. Dr. Garnet B. Grant, who has charge of the case, says that Hanson will be forced to curtail his activities for at least two weeks.

“Hamilton H. Cotton, injured with Hanson in the accident, was not seriously hurt. His cuts and bruises have healed,” the newspaper reported.

At the end of August, an article reported Hanson “goes under knife at Mercy Hospital” in San Diego, on his hip. “He is still at the Mercy Hospital and will remain in the southern city for a few weeks,” the article said.

He returned home to promote a plan California had announced to build a statewide-attractive beach camping park in his village.

An original Aug. 7, 1931 headline had announced “State Purchases Beach Park at Spanish Village,” describing the purchase of 6,000 feet of beach and 100 acres for a public park. The price was $400,000 for the state park, of which the state paid half and San Clemente civic leaders headed by Hamilton Cotton paid the other.

The camping park would be conveniently close to San Clemente’s golf course, a tourist pinnacle for the town.

“It is the only state park in Orange County made possible by the $5,000,000 bond issue passed at the last election,” the newspaper said, and public-hearted government men had inspected San Clemente and “endorsed it as one of the best sites in the state for a public park.”