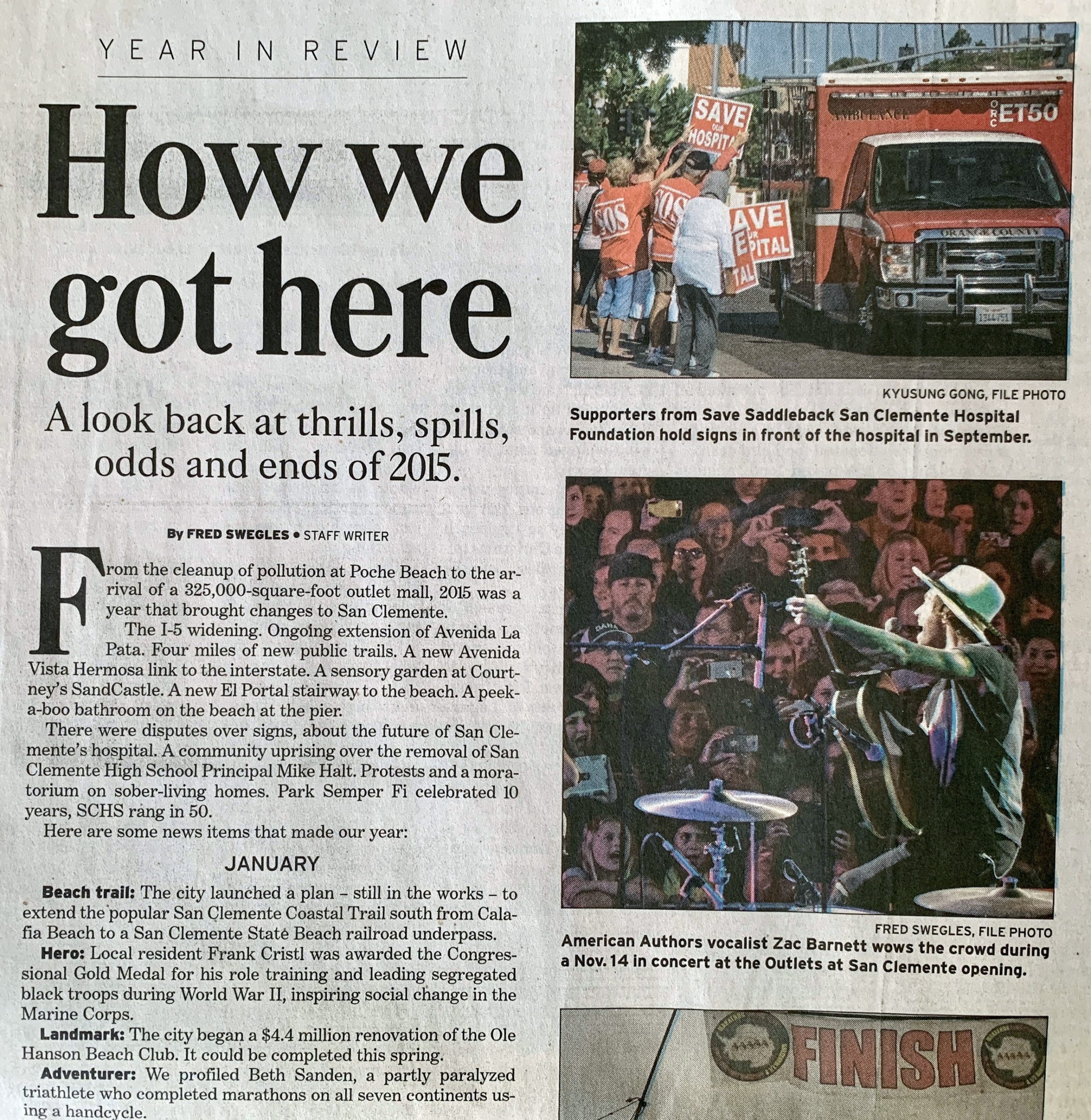 Every December, a year-end ritual in the San Clemente Times takes a look back at the previous 12 months. This year, we reviewed 2020 last week, on Dec. 24. So, to add a little extra historical perspective, let’s hop into our time machine and travel back five years to 2015.

If you were here then, I suspect your reaction to most of the items you’ll read here will be this: Was that really five years ago? It won’t seem like it. But what a year it was, I think you’ll agree.

Over the past year, I’ve put together columns revisiting San Clemente in 1930, 1970 and 1985, inviting readers to consider how some things have changed, while others maybe not.

Here’s a collection ofretrospective news items that I wrote at the end of 2015, five years ago, in the Sun Post News. Yes, it really has been five years.

Shopping center: The Outlets at San Clemente opened, 18 years after the city had recruited a developer to design and build a Spanish-motif regional retail center.

New linkage: A new coastal stretch of Avenida Vista Hermosa opened, from I-5 to Avenida Pico near North Beach.

New trails: The public began hiking four miles of new public trails that were built as part of development of the Sea Summit residential community.

Horn solution: The Federal Railroad Administration approved a plan to silence the routine sounding of train horns along the beach trail by putting in stationary horns and other safety accessories at seven rail crossings.

I-5 expansion: Caltrans and the Orange County Transportation Authority began a widening of Avenida Pico and its I-5 undercrossing as part of a $230 million freeway widening.

Beach parking: A local resident’s lawsuit wiped out San Clemente’s $10.5 million beach parking fund, ordering refunds to homeowners who had paid into the fund over 25 years without seeing major results.

Ocean cleanup: Poche Beach got high marks for ocean cleanliness, ending years of statewide notoriety. Whether the pollution solution had been fake coyotes, live falcons, stormwater filtration or water conservation, Poche was no longer frequented by seagulls, the suspected culprit for the pollution.

Hotspot: A national “Best of/Worst of” trending organization deemed San Clemente the 16th-best place in the U.S. to start a restaurant.

Principal dismissed: The town rallied around San Clemente High Principal Mike Halt, after the Capistrano Unified School District had yanked him from campus. Facing community pressure, CUSD let him participate in graduation. He promptly was hired as principal of Estancia High in Costa Mesa.

Local control: A group of parents unhappy with CUSD united to try to form a San Clemente school district.

Oops: The opening of a new $535,000 beach bathroom at the pier drew notoriety, after word got around that the design inadvertently offered outsiders a peekaboo into the dressing rooms.

Major facelift: New owners of a rundown shopping center that had been anchored by Kmart began undertaking a major redesign and upgrade for that part of town.

No burger: Debate over traffic led the city council to vote, 3-2, to reject In-N-Out Burger’s plan for an eatery at 620 Avenida Pico, now Starbucks.

Park Semper Fi: Festivities in the Pier Bowl drew some 2,000 people to celebrate the unveiling of the Heritage of San Clemente Foundation’s $200,000 Marine Monument.

Schools: Protests from parents challenged whether Talega students or Capistrano Beach students should be moved to a new high school in San Juan Capistrano instead of staying at San Clemente High.

Crosswalks: The city introduced flashing lights in two downtown El Camino Real crosswalks, only to learn that they weren’t a cure-all. Two pedestrians were reported hit.

Sand: The city imported 5,000 cubic yards of sand from the Santa Ana River bed to replenish North Beach. The sand abundantly restored the eroded beach but drew criticism because it was grainy and included small rocks.

Proposed deal: The owner of Pacific Golf and Country Club unveiled a plan to rescue the 27-hole golf course from bankruptcy by shrinking it to 18 holes and building more than 380 homes. In return, the owner offered to pay the city’s $6 million shortfall to build a municipal aquatics center. The private golf course had been built in a development’s buffer zone designated as open space.