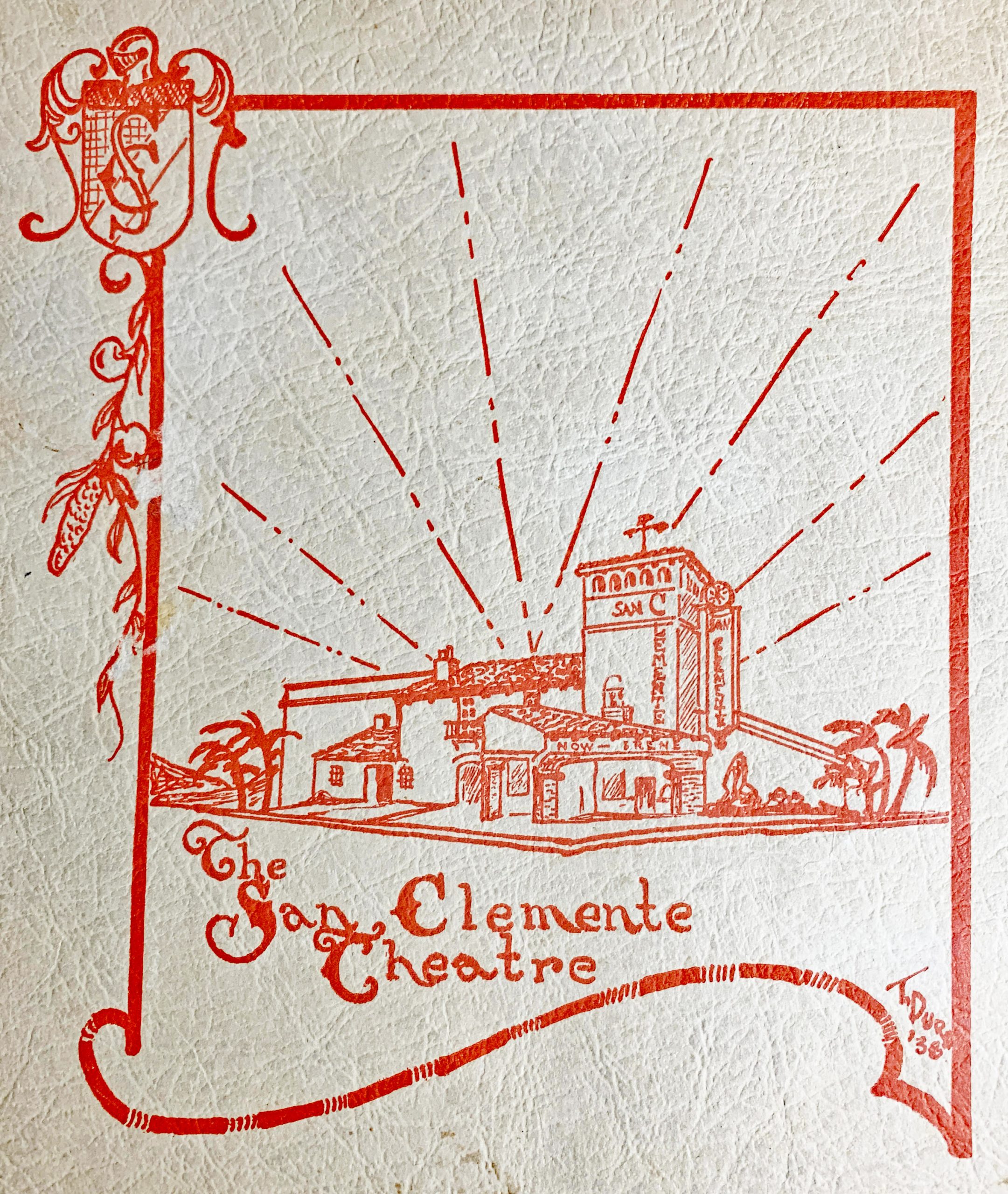 In the North Beach Historic District, how did we go from having an El Hidalgo Theatre to a San Clemente Theatre to a Miramar Theatre?

I recently got curious, after a restoration of San Clemente’s landmark movie palace uncovered the remains of a painted logo on the tower, probably unseen for more than 80 years.

The theatre’s original name, “El Hidalgo,” was conceived in 1937. The name changed—shortly before opening night on May 12, 1938—to San Clemente Theatre.

It never operated as El Hidalgo. I have the opening night program. It says San Clemente Theatre.

A pre-opening sketch of the cinema depicted the words “El Hidalgo” painted on the 44-foot-tall tower, together with an ornate painted eagle. An “opening soon” photograph showed the eagle but no “El Hidalgo” lettering.

I couldn’t find any opening night photo to see how the elegant building looked to its first moviegoers.

The San Clemente Sun on May 13, 1938 did report that “hanging over the sidewalk, along the highway side, is the title San Clemente Theatre, formed in neon.”

By 1934, Hanson lost his dream and left town. The Bank of America owned most of the property.

A 1936 Santa Ana Register article described how a court ruling ended Hanson’s decree that every building in the Spanish village had to be Spanish.

The bank had challenged Ole’s design restriction in court, hoping to jump-start an economic recovery for San Clemente by opening the village to cheaper wooden construction.

To draw attention to San Clemente, the bank’s Capital Company subsidiary built two impressive landmarks—a remarkably ambitious dance pavilion in 1937 at the entrance to town, and then beside it in 1938, a classic Spanish-style movie theatre.

The theatre was leased to the Pacific States Theatre chain, which evidently picked the name El Hidalgo.

It would be a landmark for San Clemente, just as the Casino San Clemente ballroom already was, widely acclaimed for its dance music by celebrity orchestras, broadcast live over the Columbia radio network.

A preview news article stated that San Clemente’s theatre would have the latest sound and motion picture equipment like El Rey Theatre, which Pacific States had opened recently along Wilshire Boulevard’s Miracle Mile in Los Angeles.

El Rey Theatre had been designed by the same architect. The Los Angeles Conservancy, decades later, helped restore it as an art deco L.A. landmark.

So, what does El Rey mean in Spanish? “The King.” Why not, then, call Balch’s palatial San Clemente theatre El Hidalgo, which in Spanish means “The Nobleman?”

The faded eagle painting that you can barely see today on the tower wasn’t just an eagle. A close look at the 1938 photograph verifies it was a coat of arms, befitting a Spanish noble.

My guess is that Bank of America’s Capital Company—impressed with Balch’s refined Spanish cinema—decided to brand it as the San Clemente Theatre, tying it into the company’s advertising campaign to sell lots, build homes and help San Clemente rise out of The Great Depression.

On to 1969. New ownership invested $100,000 to upgrade the San Clemente Theatre, renaming it Miramar.

His background was lively: “Fidel Castro’s Cuban terrorists once threatened to blow up Herb Copelan’s movie theatre in Havana,” I wrote.

Copelan had operated three theatres in Cuba from 1947 to 1960. He was, I wrote, “a friend of several Cuban presidents, including the one Castro overthrew. He met Fidel, too.” He also was in charge of Warner Brothers’ theatres in Latin America.

Copelan lived an easy life in Cuba until Castro’s communist revolution seized power in 1958. For two years, the movie man was caught in the middle, straddling a thin line.

“We were forced to live in a hotel where there were all Chinese and Russians,” Copelan told me.

“One day, the government just took over my theatres,” Copelan said.

Ordered to leave Cuba, Copelan departed with $5 in his pocket. “I couldn’t take anything—my Cadillac, my wedding gifts, furniture, clothing,” he said.

He returned to Hollywood’s movie industry, his background having included more than 50 theatres, hosting gala movie premieres and dinners for movie stars.

In 1969, Copelan found San Clemente. He purchased the aging seaside cinema, dressed it up, renamed it.

This would be Copelan’s only theatre. He was semi-retired.

In 1980, he retired. The Miramar survived until 1992 under new owners, then was shuttered.

One night, I had a sudden hunch about the Havana theater Castro had threatened to blow up.

Oh, my, gosh. I knew what its name had to be. Anxiously, I tried a web search.

Under Castro’s rule, the Miramar decayed. In 2011, a British nonprofit, Music Fund for Cuba, renovated it as a multimedia and performance center with a jazz cafe.

Which is sort of what Copelan’s former Miramar Theatre in San Clemente is, at last, being revived as—an events center with food courts.