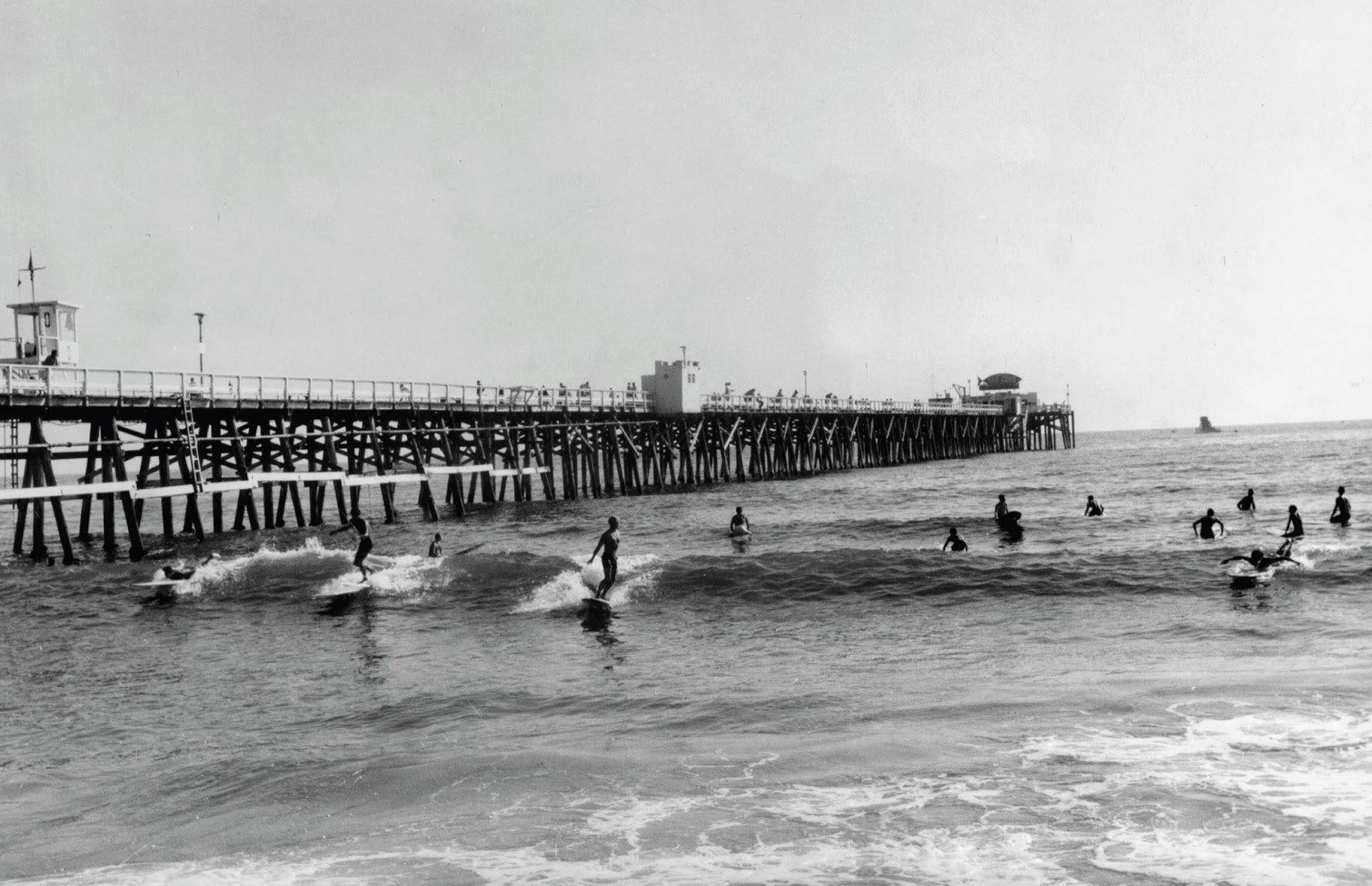 Generations of San Clemente ocean lifeguards this year are celebrating a 90-year heritage of protecting beach visitors and locals from the sea.

Now, just imagine yourself, back in the year 1931, when the town of San Clemente—then a five-year-old beach attraction—was known as the “Spanish Village by the Sea.”

On Jan. 2, 1931, Santa Fe Railroad launched construction of San Clemente’s first train station, promoted as “the first station on the ocean of the Santa Fe system … built on the sands of the beach” between Los Angeles and San Diego.

“The beach was a big deal,” Moore said. The pier, ocean, surf and soft sand beaches were there in 1931, with amenities set up to entice beach families.”

“You set up your gear on the south side of the pier and head to the water in your new beach ‘costume,’ ” Moore said. “Jumping over a few little waves, you have no idea a south swell set is coming. Moments later, the whitewater sucks you into the inshore hole and the current is pulling you into the pilings. It’s terrifying … and a daily occurrence on our beaches. That is why ocean lifeguarding goes back to the city’s early roots.”

The train station opened in April, eager to shuttle visitors for summer days or week trips. San Clemente would be offering comfort stations, beach safety and downtown hotels built since 1926, the year when San Clemente’s first collection of buildings went up.

Town founder Ole Hanson dreamed of building a spectacular 100-room resort hotel on a hill overlooking what is now known as T-Street Beach.

So, on July 16, 1931, San Clemente’s city fathers hired the Spanish Village’s first public lifeguard—paid $100 per month—to protect local residents and visitors on the beach through Labor Day of each summer season.

We can’t be sure how many original lifeguards the city might have had. The lifeguard foundation was able to document the original hiring on July 16, 1931, from city council proceedings. Could there have been more lifeguards, either paid or as volunteers like volunteer fire departments had?

Moore said, “We needed a lifeguard. Would it be bad business to have people getting frightened, or the beach looking a mess?”

On Aug. 5, city fathers discussed the idea to install an at-grade railroad crossing and the coming establishment of San Clemente State Beach. Another idea was to string a long rope between pier pilings at sea level, so bathers could grab it if swept into the pilings.

“That is so dangerous,” Moore said.

Lifeguards also were asked to rake seaweed from the beach daily and remove litter. There were also mentions of lifeguards assisting barefoot visitors suffering from splinters while walking on the wooden pier.

San Clemente was touted as among Southern California’s fastest-growing towns from 1926 through 1930, featuring Spanish-designed homes and businesses, a golf course, a stylish clubhouse, an enticing beach club, the fishing pier, 3,000 feet of public beach, parks, a Spanish plaza, a Spanish schoolhouse and a network of equestrian trails.

From 1926-28, the population went from zero to more than 1,000, according to the book The Heritage of Clemente.

What Ole and his financier, Hamilton Cotton, said was that “this land appears to be available at a reasonable price, and we just need to sell people on the fact that they can build their slice in paradise,” Moore said. “This isn’t necessarily a place you’re going to move to and make your home full-time. You’re an hour and a half by dirt roads.”

San Clemente was said to have the highest per capita income in the entire country, he said.

“It’s a surreally piece of history,” Moore said. “To incorporate, city maintained all infrastructure, given to the city.”

The newspaper El Heraldo de San Clemente insisted in 1931 that San Clemente could continue to grow, despite a national 1929 stock market collapse across America.

“A piece of land is a solid thing that no stock market crash, no failure, can erase,” the local paper said, suggesting buyers invest in real estate at San Clemente. Hanson’s town, having built its infrastructure at no cost to property purchasers, donated the public facilities to the city for $1 after San Clemente incorporated as a city in 1928.

The town, owning its water system and other infrastructures—all built by the Ole Hanson Organization to enable residents to not have to bear the costs—gave San Clemente a better chance to withstand Depression hardships and stay solvent, even as homeowners were in danger of losing their homes.

The hotel for T-Street never got started. The population dropped, as many residents no longer could afford their homes. All the while, San Clemente’s beaches remained popular.

Cliff Russell, a San Clemente lifeguard from 1937-40, mentioned how one of town founder Hanson’s sons—Bunny Hanson—was a lifeguard before Russell was.

Teenager Hanson, described as a lively personality, “was very short and a bodybuilder and very proud of it,” his niece, Julia Watters, recalled. She had no knowledge of him being a San Clemente lifeguard back then.

In a 2006 interview with lifeguards, Russell recalled that lifeguarding started out under management of the police department.

“Organized lifeguard training was held in Long Beach, and only five to six lifeguards worked during peak summer months,” Lynn Hughes, the city’s lifeguard captain in 1980, was quoted as saying.

“Guards did not use fins. They had no telephones and ran to all rescues, because they didn’t have vehicles,” Hughes said. “The majority of swimmers congregated on the south side of the pier.”

“They had only one lifeguard, and that was me, in 1937,” he said. “Then on weekends, sometimes they’d hire one more. When we got big holidays on the Fourth of July, sometimes we’d get 5,000 people or more on the beach, and they’d hire one or two more lifeguards. We’d keep real busy.”

Hughes said Russell worked out of San Clemente’s first lifeguard observation tower—built south of the pier. It had a 20-foot-tall ladder up to the observation deck and a pole to slide back down to the beach to sprint to an ocean rescue.

Russell told how he had to grasp victims by the shoulders, and panicked swimmers were apt to fight for their lives. Lifeguards had learned how to reverse the resistance, stay under control with one arm.

Eventually, lifeguards used a “torpedo” floatable assist, attached to their shoulder, to haul the victim.

One of the earliest pictures of the beach tower shows a smiling San Clemente boy, Don Divel, with a Santa Fe train in the background. Divel would become a San Clemente lifeguard in 1939 at age 17.

He recalled how part of his job was raking up seaweed, digging a hole to bury it, also helping beach visitors set up their orange and black umbrellas.

One year, one of his ocean rescues involved a San Clemente girl six years younger than he.

“I didn’t think I needed to be rescued, anyway!” Lois Driscoll said recently about that day. “But he thought I was struggling.”

“He just said, ‘I think you’re in trouble out here. Just take my hand, and I’ll take you back into more shallow water,’ ” she said. “I thought it was pretty cute, pretty neat. There weren’t many people on the beach anyway, so he was doing his duty.”

In 1946, as Driscoll was a senior in high school, she learned that her rescuer, Don Divel, was coming home from the Navy. He took her to the senior prom, and Don and Lois Divel were married that October.

Through the 1970s and ’80s, Moore was a San Clemente lifeguard. In the late ’80s, he transitioned from lifeguard lieutenant to establish a technology office at city hall. Part of it was uploading historic city paper records digitally into computers. City officials could then look up information, searching by name or topic.

Years later, Lifeguard Chief Bill Humphreys researched to try to track down the word lifeguard or beach lifeguard for some history in digital city records. Nothing showed up.

He tried the word Life Guard, and it clicked, turned up city council meeting actions or brief mentions—some lifeguard history from the 1930s.