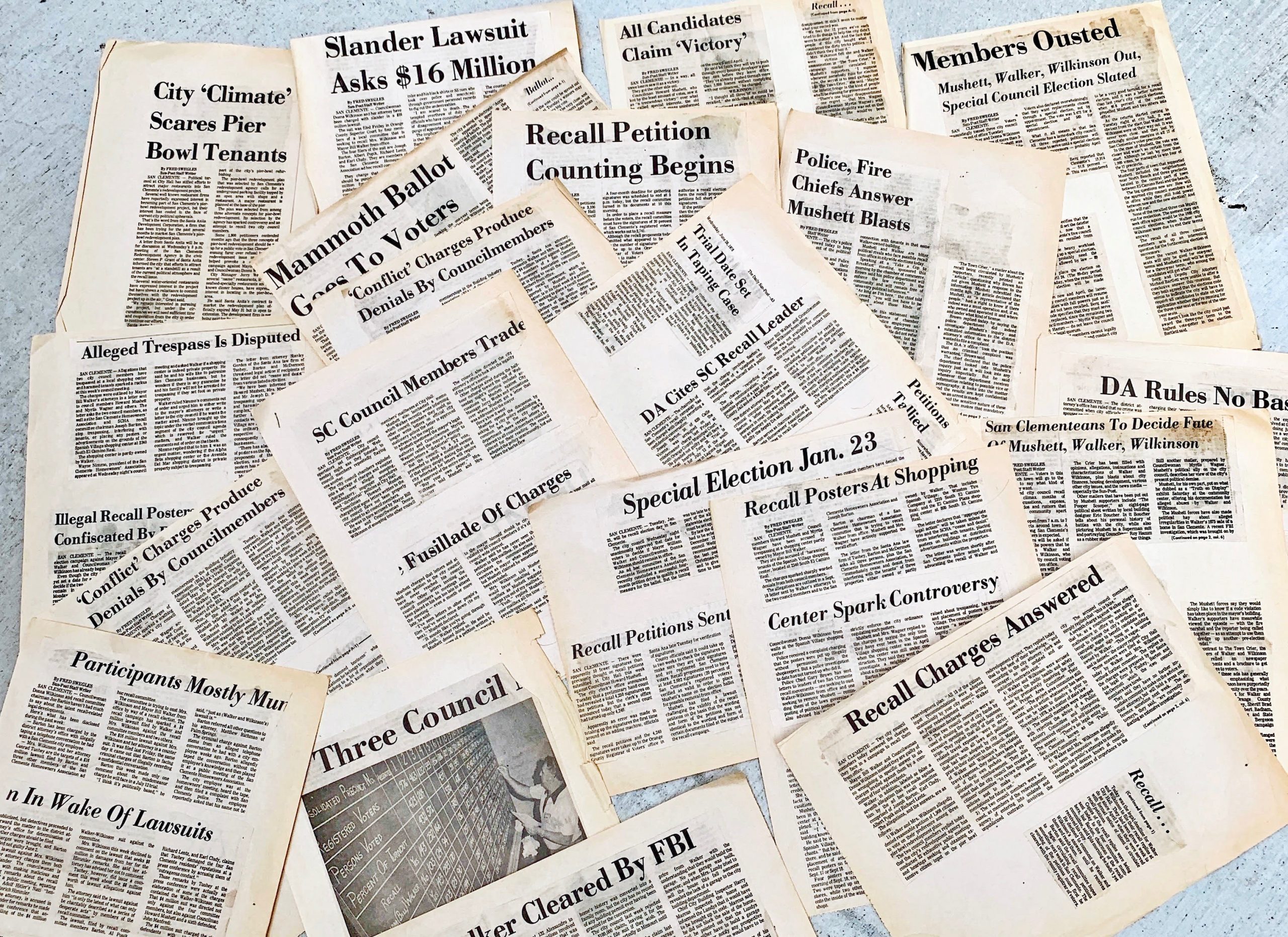 CoastLines: You Think This Year’s Ballot is a Biggie? Think Again

If you think it’ll take a bit of homework to navigate this fall’s city council ballot—18 names battling for three seats—imagine if you had twice that many candidates to evaluate.

In April, 1979, San Clemente voters had to decide among 36 candidates for three seats.

It was a raucous period in San Clemente politics, producing six recall drives from 1978-80. Here’s how it played out, as reported in the Daily Sun-Post and the Santa Ana Register.

Prelude: The rollercoaster ride began in late 1977 with controversy over a Pier Bowl redevelopment plan. A political watchdog group, the San Clemente Homeowners Association, petitioned the city council, with 1,908 signatures, to let voters pick among three concepts. The council said no, asserting that an ample public input process had led to the plan. The SCHA threatened to recall any incumbents still in office after the March 1978 elections for three council seats.

March 1978: SCHA president Howard Mushett was the highest vote-getter among 14 candidates. He resigned from SCHA and set out to recall holdover councilmembers Bill Walker and Donna Wilkinson.

Through 1978: A rival campaign targeted Mushett for recall. He tried to get Walker and Wilkinson prosecuted for alleged malfeasances, which the district attorney rejected. Walker and Wilkinson sued Mushett and recall leaders. They countersued. City council meetings became an ongoing soap opera of charges and counter allegations. A recall leader was convicted of illegally tape-recording a city employee.

Spring 1979: Thirty-six candidates filed for three council seats. Eleven sought to fill the remaining three years of Mushett’s aborted four-year term that would end in 1982, with 25 candidates seeking the Walker and Wilkinson seats expiring in 1980.

May 1979: Wagner wanted to immediately fire City Manager Jerry Weeks, replacing him with Mushett, but was advised it wouldn’t be legal. Koester called for blanket resignation of city planning commissioners.

August 1979: The new political group also sought to recall Koester, followed by a rival recall campaign against Hamm. Wagner publicly denounced new Councilmembers Kalsched and Ahlman, calling them “turncoats” because of planning commission nominations they’d made. Kalsched proclaimed he was independent, not beholden to Wagner for his election. Ahlman said his intent was a cross section on the planning commission.

February 1980: On a 3-1 vote, the council—Hamm, Ahlman and Kalsched voted yes; Koester, no—appointed businessman Roy Hurlbut to replace Wagner. The action caused a near-riot in the chambers, with audience members demanding election, not appointment. Mayor Hamm, claiming a silent majority was at home that night—wanting the city to move on, rather than “government by intimidation” and nonstop elections—halted the meeting.

March 1980: Hamm announced his resignation, effective one meeting after the scheduled April elections for the Kalsched/Ahlman seats. They didn’t seek reelection.

April 1980: Elected to those seats from among five candidates were Bob Limberg and Bill Mecham. Both had been planning commissioners. After being seated, they, with Koester, voted 3-1 to appoint Koester mayor. Hamm’s final action before stepping down was unsuccessfully nominating Hurlbut for mayor. The city council appointed Tom O’Keefe, a councilmember from 1966-78, to fill Hamm’s seat until November.

May 1980: Hurlbut resigned, saying he felt ostracized by other councilmembers. Michael McNamara, city finance director, resigned to work for city of Irvine. He said his department had managed to work well despite relentless questioning—”tremendous turnover, sickness, retirement and turmoil.”

June 1980: In her recall election, Koester “staved off a long and expensive effort to oust her from office,” the Daily Sun-Post reported. It was close, she said, but she termed it a mandate since backcountry developers had spent heavily against her. The council, meanwhile, appointed Pat Lane to succeed Hurlbut until November. Lane had served on the city council from 1974-78.

November 1980: Voters elected Alan Korsen and Pat Lane to fill the seats that O’Keefe and Lane had occupied since Hamm and Hurlbut had quit. There were 13 candidates for the two seats. O’Keefe was runner-up. Second runner-up was Bill Wagner, husband of the late Myrtis Wagner.