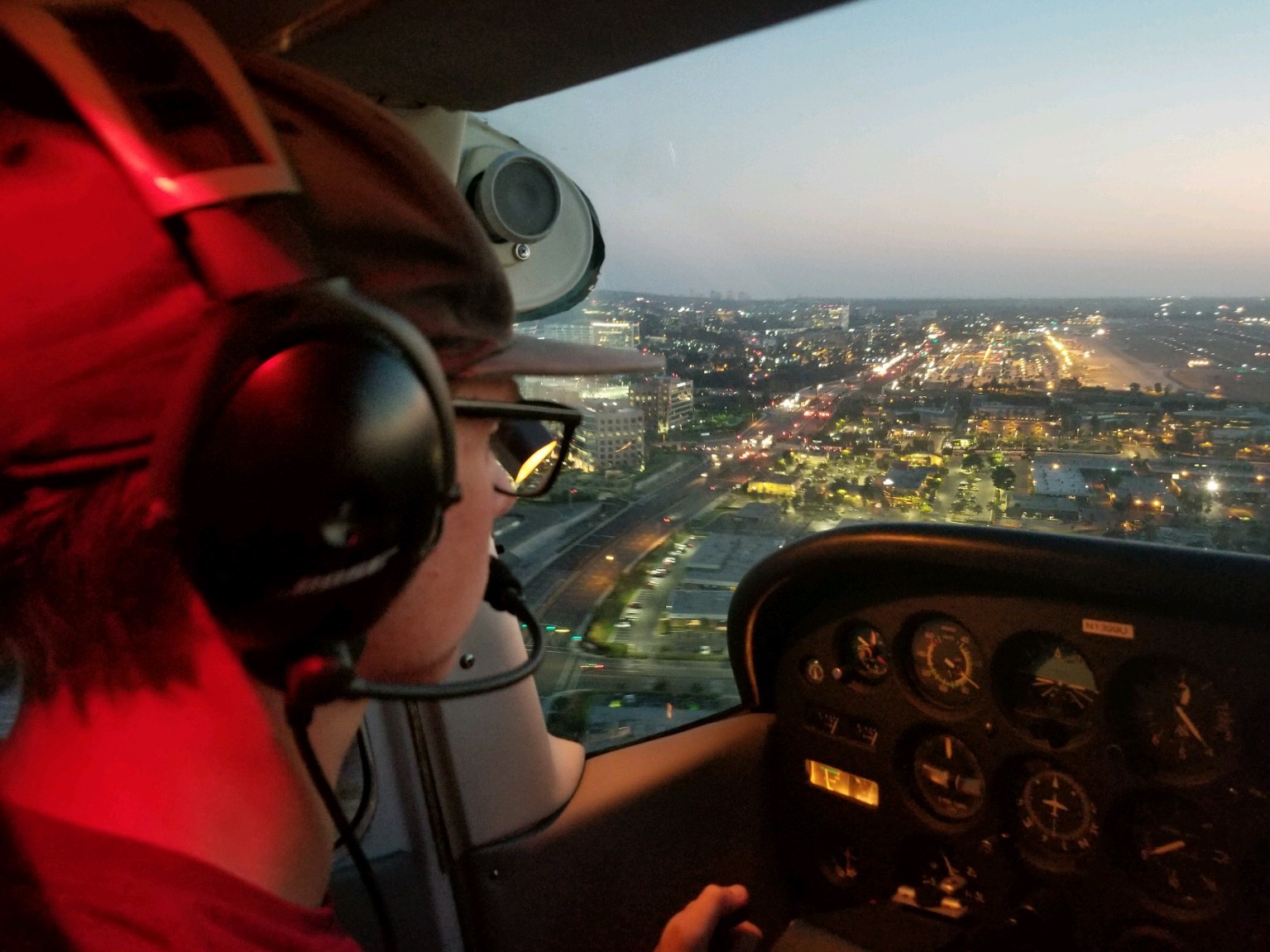 At a time when most sophomores at San Clemente High School are preoccupied with fetching a learner’s permit to drive, Patrick Economy is in no hurry for that.

He has loftier goals.

Sunday, he dropped into a surprise birthday party, flying into one of California’s busiest airports, piloting a single-engine Cessna 172 all by himself.

Dozens of friends and relatives were waiting outside a hangar at John Wayne Airport to surprise and congratulate the Eagle Scout candidate for accomplishing the first solo takeoffs and landings of his life.

This was the aviation trainee’s 16th birthday, the first day the Federal Aviation Administration allows soloing.

His driver’s license? That can wait.

“I want to keep my main focus on flying,” said Patrick, whose parents Scott and Kim both have aviation backgrounds.

“Even my French teacher thinks it’s cool,” Patrick said. “She always tells me, ‘This is unbelievable that you are flying. A lot of kids are just trying to get their learner’s permit. I don’t even have my learner’s permit. I turn 18 the first like three weeks of my senior year, so I’ll have the entire senior year to get my (driver’s) license. I won’t have to do any of the learner’s permits…it’ll be straight to a license.”

Patrick Economy, 16, pulls up to a hangar at John Wayne Airport to discover friends and relatives awaiting him with a birthday cake and congratulations on soloing for the first time in an airplane. Photo: Fred Swegles

Patrick Economy, who plays junior varsity football at San Clemente High, has now piloted an airplane solo on his 16th birthday. He plans to get his pilot's license before getting a driver's license. Photo: Fred Swegles

Patrick Economy from the cockpit of a Cessna airplane. Photo: Courtesy of the Economy family

Flight instructor Jason Herman, right, congratulates solo pilot Patrick Economy, 16. They have been working together for a year and a half. Photo: Fred Swegles

Meanwhile, he’ll be flying out to the desert or to Catalina Island at 6,500 feet.

Patrick’s first time in a Cessna was when he was a year old, in a car seat. Mom is a flight attendant with Delta Airlines. Dad is an inspector with the FAA and flies private aircraft.

The boy has grown up with airplanes. Patrick began pursuing a pilot’s license about a year and a half ago. A year ago, Patrick got to sit in the copilot’s seat in a Cessna CJ4 jet, flying to Wisconsin to attend Oshkosh, the world’s largest air show.

Patrick has mapped out a plan: Pilot’s license at 17, play varsity football at SCHS (he is now on JV), make Eagle Scout and apply to the Air Force Academy. It all looks attainable, he said.

“I want to fly bombers, B-1Bs or B-52s,” Patrick said.
He might make the Air Force his life, or perhaps fly cargo jets in his later years. He is keen on big airplanes.

Sunday, he flew to Corona with instructor Jason Herman at his side to make two touch-and-go landings there, then a final practice landing at John Wayne.

“There was a little bit of jet wash coming between the runways,” Herman said, “but he handled it perfectly…touched down perfectly.”

Herman said it was no surprise.

“We’ve been flying quite often for the last month and a half,” he said. “I’ve been sitting in the co-pilot’s seat for the last few weeks just with my hands on my lap, feet on the floor because he’s been doing such a good job.”

Patrick said he felt confident when Herman stepped away for the first of Patrick’s three required solo takeoffs and landings at John Wayne.

A sudden crosswind made the first landing a challenge, Patrick said. The other two were easy.

After that first takeoff, he flew over the hangar where he would return the plane and was shocked at what he saw below.

“I was like, ‘That’s a lot of people!’” he said. “I thought there was going to be like five people…my dad, my mom, maybe my grandparents.”

He tipped his wings to the supporters, saying hi to them.