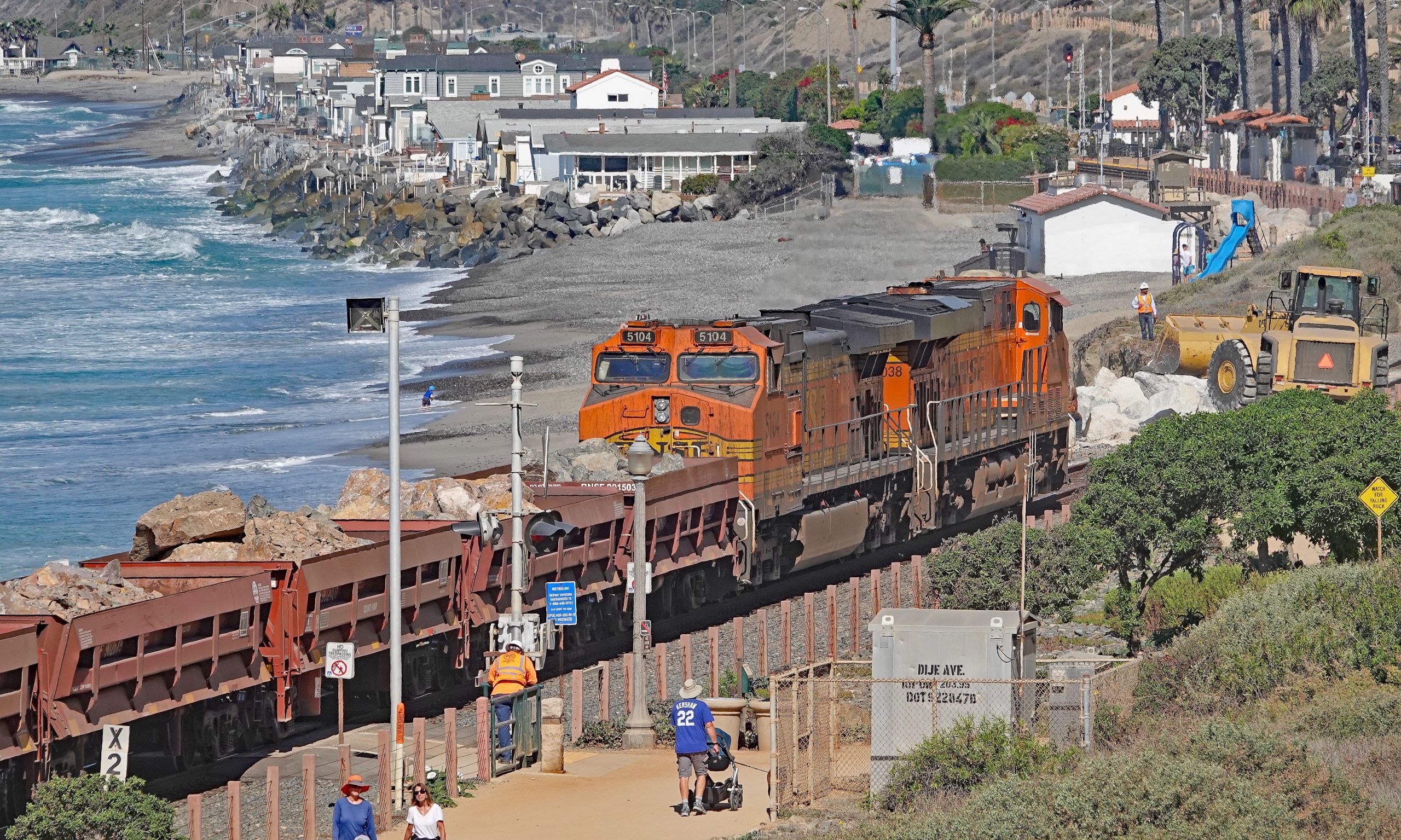 Could you imagine how our beaches would have been obliterated if the state of California had pushed through a 2002 plan to double-track the railroad corridor through San Clemente?

I was reminded about 2002 while walking the Beach Trail last week, as construction crews were adding rocks to preexisting railroad rockpiles between Mariposa Point and North Beach.

A few weeks ago, train service through town had been shut down so crews could substantially add to a seawall of massive rocks at Cotton’s Point, at the south end of San Clemente.

September storm surf had been bouncing over the rocks, showering the track bed and threatening to drench passing trains with rapid-moving sheets of water.

But, then, why dump more train-protecting rocks at North Beach, too? I walked the Beach Trail daily, inspecting the rock piles, and saw not a drop of water coming anywhere near going over rocks on the approach to North Beach.

That isn’t a big-wave spot.

Cotton’s Point is San Clemente’s most renowned big-wave reef, sending us our most intense surf generated from Southern Hemisphere storms across the Pacific.

Mariposa to North Beach doesn’t get anything like that. How many more rocks will be dumped there—or someday everywhere along our beach?

Fifty years ago, the city wanted to relocate the railroad inland behind San Clemente.

In 1969, the town argued to the state and federal governments that the tracks posed a danger to people accessing the beach, that Santa Fe trains brought very few passengers to San Clemente and that Santa Fe may soon be considering “a new high-speed line as now operating in the East,” the Daily Sun-Post reported.

In 1972, city hall got Gov. Ronald Reagan to allocate $100,000 for a feasibility study. The paper said, “It never was done. Rail relocation costs were said to be prohibitive.”

In 1998, the city proposed a controversial design for a Beach Trail—a paved walkway, perched atop the railroad rocks, on the seaside of the tracks. An opposition group, De-Rail the Trail, disliked the city’s urbanized design, saying it only would add ugly urbanization, so don’t do it and try to get rid of the urbanized coastal railroad tracks.

The group ended up working with the city, positively redesigning the Beach Trail into the rustic, landscaped, decorated features and earthen path that resulted.

The Orange County Transportation Authority, which had acquired the former Santa Fe railroad corridor as part of operating Metrolink, was now bringing plenty of service to San Clemente. The tracks had been there for so long, would be impossibly expensive to move, and any attempt to relocate the railroad would impose impacts on whatever inland route, OCTA said.

DOUBLE-TRACKING ON OUR BEACH?

In 2002, the city learned that Caltrans and a California High-Speed Rail Authority were planning a $25 billion, 700-mile statewide bullet train to include double-tracking through San Clemente.

San Clemente, Dana Point and San Juan Capistrano united to fight it. Try to picture what a double track would do, ripping through the Pier Bowl area and stripping away at all our beach.

The High-Speed Rail Authority gave up on the double-track concept and looked at alternate inland routes between San Juan and San Onofre, possibly including tunnels.

Then, for the 2008 election, the state proposed a downsized $9.95 billion bond measure to construct a high-speed rail, linking San Francisco with Los Angeles, not farther south. The measure passed.

The project is stalled and woefully underfunded.

But what are the chances railroad rocks continue to be added to yet unarmed sections of San Clemente beach?

CUSHY NEW SAND FOR OUR BEACH?

The plan is to dredge sand that’s been tested by the Army Corps from the sea bottom off the north end of Oceanside to deposit 251,000 cubic yards onto the beach—to be repeated every six years or so, as needed, being monitored from time to time, over a 50-year replenishment period.

The Army Corps may at last be under construction of the San Clemente Shoreline Project’s first replenishment if federal funding is released this year. In July, Rep. Mike Levin announced an appropriation request for $9.3 million from the Senate.