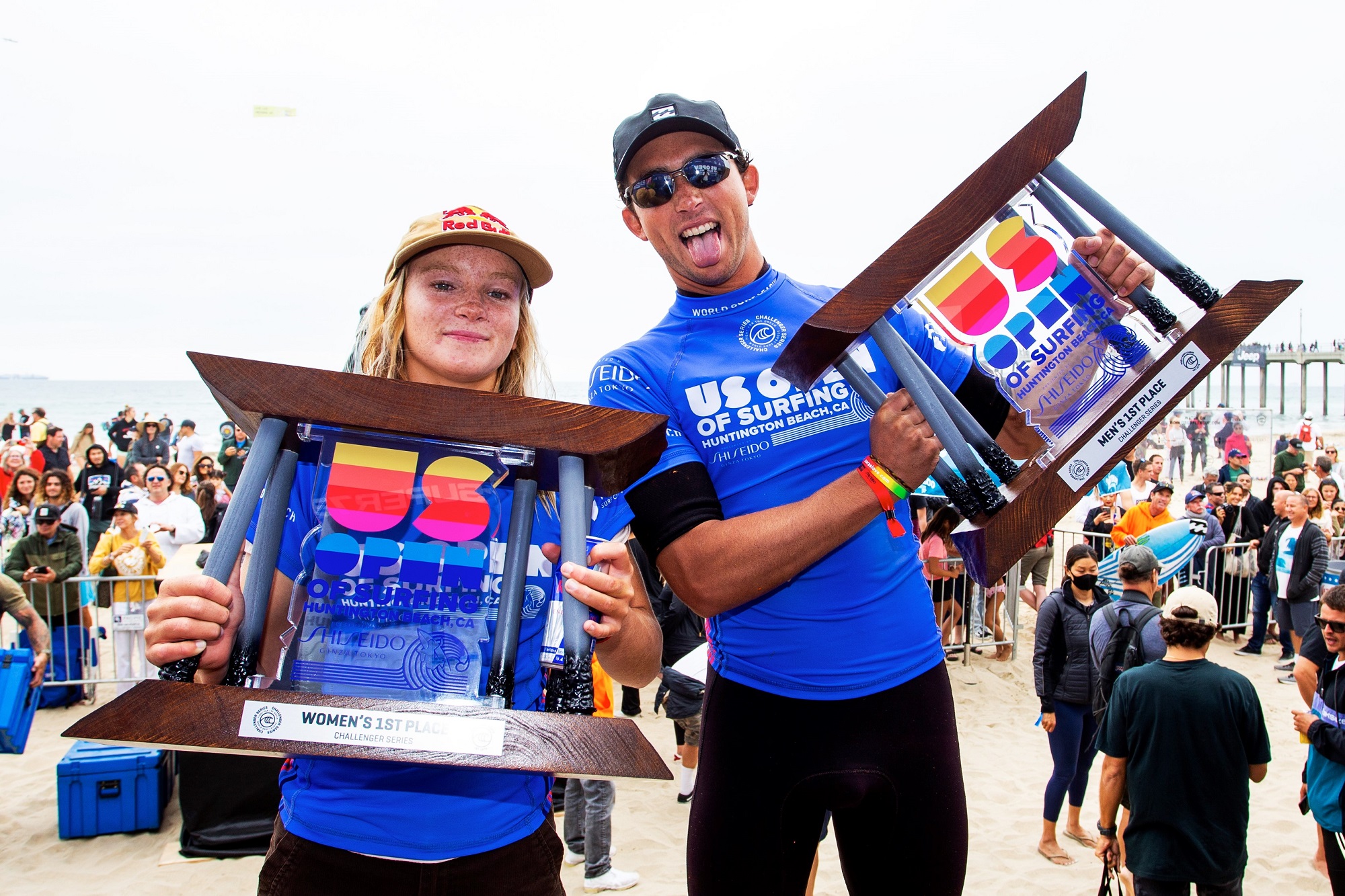 In a California Sweep, Both Surfers Score Biggest Wins of Their Careers

After a hard-fought week of surfing, San Clemente’s Griffin Colapinto and Oceanside’s Caitlyn Simmers earned career-best wins at the U.S. Open of Surfing in Huntington Beach.

For Colapinto, who was supported on the beach by a horde of orange sweatshirt-wearing friends and family, the victory comes after finishing runner-up at the U.S. Open in 2018 and making the semifinals in 2019.

“It’s been a long time. I won my last event in a Pro Junior when I was 16 years old, and it’s been like a burden on me,” said Colapinto after celebrating in the shorebreak with his brother, Crosby, longtime friend and sparring partner Kolohe Andino and a handful of others. “I had this weird intuition from the beginning of this contest that it was all going to come together, and everything was feeling good.”

“There’s so many people to thank: my parents are massive, my brother, my friends, my grandparents. I’ve just had such great support my whole life. They helped make me who I am today,” Colapinto said.

For Simmers, the win in Huntington Beach was a shot across the bow, signaling that the next generation of surf talent has arrived. At only 15 years old, Simmers is one of the youngest surfers to have ever won the Open. (Hawaii’s Malia Manuel won the contest when she was just 14.)

The Oceanside phenom was also able to post back-to-back Open wins, as she took out the Pro Junior division of the event in 2019.

Simmers has been building to this moment all summer. In August, she won the Jack’s Surfboards Pro on the south side of the Huntington Pier. She went on to make the semis of the WRV Outer Banks Pro in North Carolina and followed that up with a runner-up result at the Nissan Super Girl Surf Pro last week.

“I don’t really have much to say other than I’m really happy and stoked everything went my way,” a reserved Simmers explained after her huge win. “I’m not really trying to qualify (for the WSL Championship Tour) and just want to have fun in France and Portugal, and just surf, and enjoy myself.”

This year’s U.S. Open was the first stop of the World Surf League’s new Challenger Series, which will determine who graduates to the illustrious Championship Tour in 2022. There are only four stops in this year’s abbreviated Challenger Series.

Up next, surfers will head to Portugal and France for a pair of events. They will then hop across the Atlantic and the Pacific for the final event in Hawaii. The top three results will be counted at season’s end. For the men, that means finishing in the Top 12. For the women, a Top 6 finish earns a spot on the Championship Tour.

Based on their performances at the U.S. Open, there are three San Clemente surfers knotted at 21st in the Challenger Series rankings: Patrick Gudauskas, Kade Matson and Cole Houshmand. Making it to the Round of 16, both Matson and Houshmand had stellar runs at the Open and should be able to build confidence and momentum from their experiences in Huntington Beach.

On the women’s side, San Clemente’s rising star, Sawyer Lindblad, who’s only 15, ripped her way into the quarterfinals, as did 19-year-old Olympian and SC resident Caroline Marks. Lindblad has climbed to 15th in the Challenger Series ratings, while fellow San Clemente shredder Kirra Pinkerton is holding down the 10th spot.

Depending on what happens in Europe and Hawaii, any of these surfers has a strong shot of qualifying for the Championship Tour next year. But whatever happens, it’s clear that the San Clemente surf community is once again on the rise.

“Win or lose, I’m always going to smile, so it’s all good,” Colapinto said. “That was the biggest win of my career and a big moment in my life. I’m glad I got to share it with everyone here.”

Grom of the Week: Kai Thompson