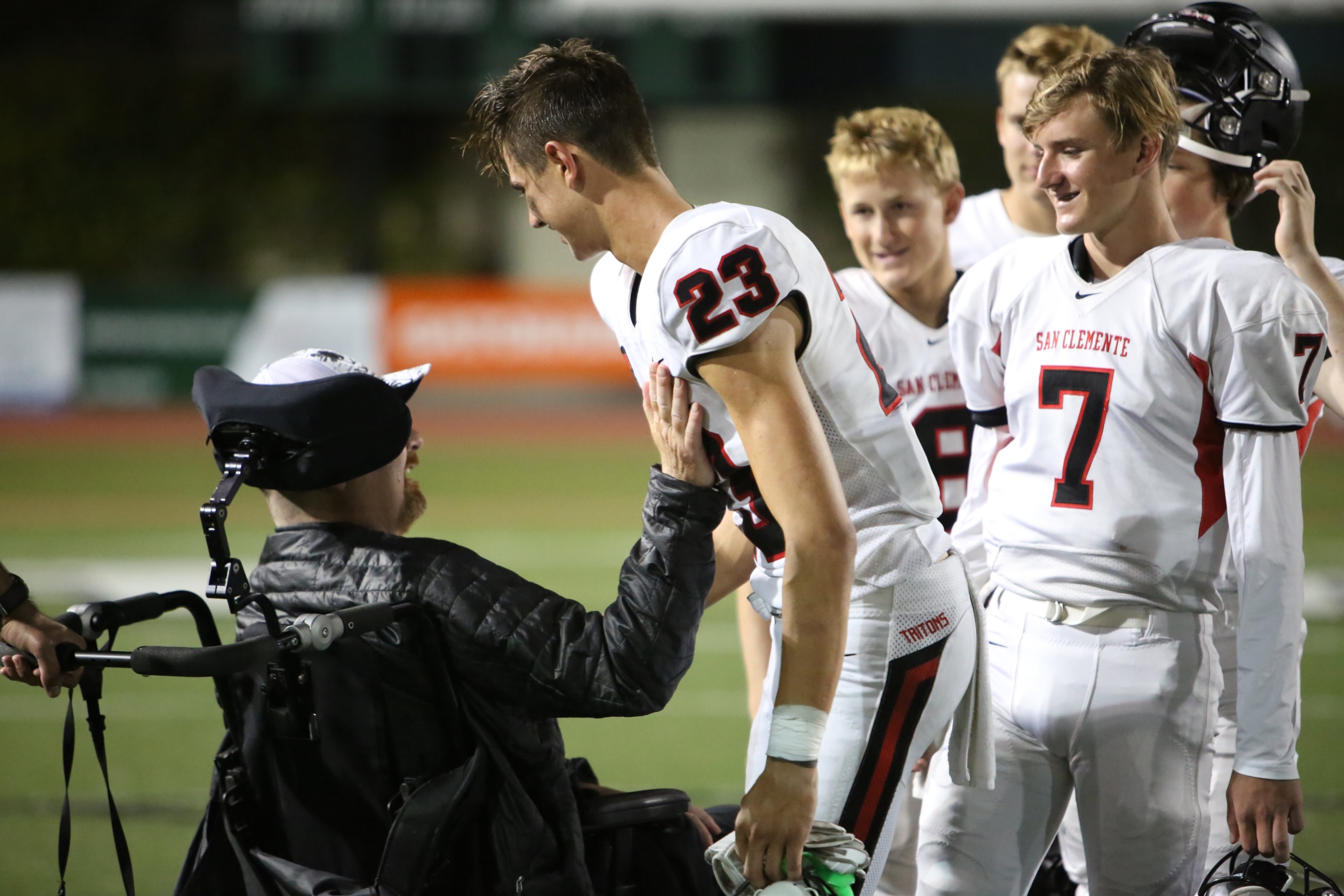 After nine months of pain and struggle, the Coulson family welcomed an embrace from the San Clemente and Oceanside football communities on Friday, Aug. 23.

Michael Coulson sat on the sidelines at Oceanside in a supported wheelchair as his son, Aidan, a starting offensive lineman for the Tritons, helped San Clemente win its season opener over Oceanside. The Tritons scored three times in the fourth quarter for the 35-13 victory.

Coulson had earned a victory by simply getting to the game on Friday. Battling Stage 4 brain cancer since last November, Coulson had set a goal to persevere to football season and see Aidan play on the big stage with San Clemente.

The Triton football family had embraced and supported the Coulsons in various ways since the diagnosis. Michael Coulson had been set to become the booster club president as last season ended.

The Tritons embraced Coulson once again as they showered him with hugs, high-fives and words of encouragement.

“(The players) were saying it was for him,” said Lori Coulson, Michael’s wife and a photographer for the team. “It was super special.”

The moment was even more special with a round of fate and scheduling.

Several of Aidan’s former teammates lined up for the Pirates on Friday, including a direct competition on the line between Aidan and friend Trey Russell, a defensive end.

So, after the embraces from the San Clemente players, the Oceanside players also came over to recognize a former member of their football community.

On Nov. 18, 2018, Michael Coulson received the diagnosis of glioblastoma, which is an aggressive brain cancer that occurs with three cases per 100,000 people and has a median survival time of one year.

Since then, the Coulsons have received support from the San Clemente community, The Shoreline Church and Triton football.

A GoFundMe campaign had been set up for the Coulsons and is still accepting donations at gofundme.com/m4vjha-step-by-step-with-michael-coulson. The Coulsons have also been providing updates at thecoulsonclan.com.

The Coulsons have been without an income for more than a year, with Lori acting as full-time caregiver along with handling the four children, including all three triplets starting as freshmen at San Clemente High School.

The community has provided meal trains, helped install ramps and modify their home and even help pay for the wheelchair van that allowed Michael to make the trip to Oceanside.

Last winter, Triton coach Jaime Ortiz and the dads of Triton football helped put up Christmas lights and decorations for the Coulsons and organized what Lori called a small parade along their street when Michael came home rehab for the first time. Players and their families lined the Coulsons’ street for the return and helped with a 12 Days of Christmas experience for the family.

Another example of how special #onetownoneteam is. As you may or may not know, one of our dads has been battling cancer. Our Triton Family decided to surprise him as he made a trip home for the day from his treatment center. We are #onetownoneteamonefamily pic.twitter.com/tVEu7FnmgR

The most unbelievable might have been when the Coulsons were at their lowest.

In April, the Coulsons needed a small vacation. With Michael feeling well enough, the Coulsons went for a short trip to Palm Springs and hired a dog sitter for the weekend.

Michael had a bad reaction to one of his medications, which forced the family to come home early. When they arrived home, they found the dog sitter had stolen more than $1,000 in cash, gift cards and other items.

The Triton football family took up a collection and made a gift basket for the Coulsons, including gift cards and a check to replace the money stolen.

“That’s something that’s special about San Clemente,” Ortiz said. “Whether it’s a league championship or it’s a family in need, the city responds exactly the same.”

With the support of the San Clemente community and their Triton football family, the Coulsons continue to push forward and accomplish their goals.