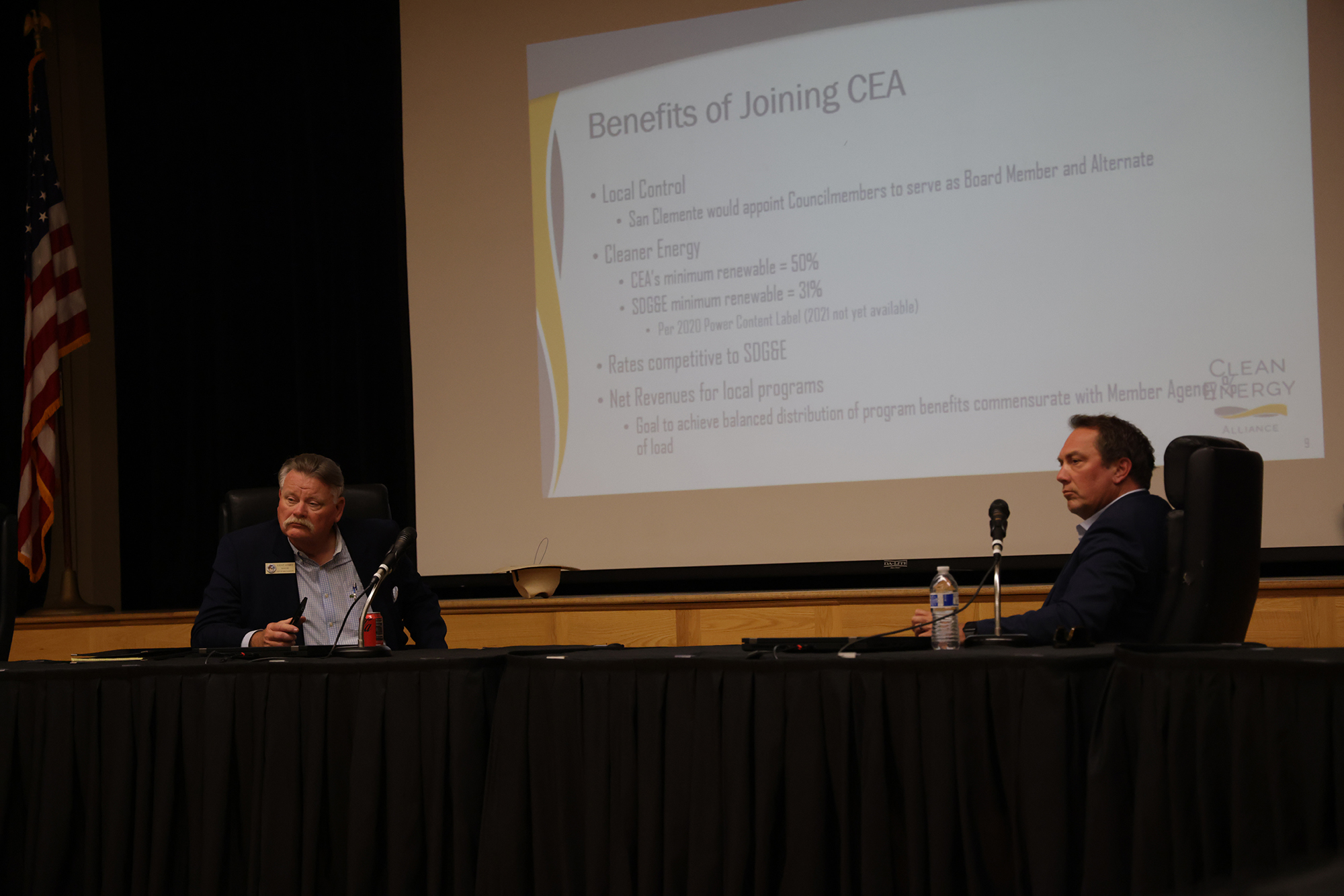 At its upcoming meeting on Tuesday, July 19, the San Clemente City Council will likely vote whether to join a local power supply program that could give the city a new voice and clean energy.

Ahead of the pending decision, Mayor Gene James and Mayor Pro Tem Chris Duncan gathered with San Clemente residents Tuesday, July 12, for a Community Choice Energy (CCE) workshop to discuss the matter with a key guest.

Barbara Boswell, CEO of the Clean Energy Alliance (CEA), presented information about the state’s CCE initiatives, what would happen if the city were to join and the potential benefits of joining.

CCE, also known as Community Choice Aggregation, which was authorized by Assembly Bill 117 in 2002, allows municipalities to aggregate the electricity load for the purpose of buying electricity, setting rates and selling it to residents and businesses.

It also required investor-owned utilities (IOUs) such as San Diego Gas & Electric to maintain responsibility for providing transmission and distribution, maintaining the poles and wires of its infrastructure, and providing customer service in terms of setting up accounts and billing, among other actions.

According to Boswell, the first CCE program was established in Marin in 2010, and the number has since grown to 23 across the state, that serve 216 cities and counties and over 4.5 million customers.

Founding members Carlsbad, Del Mar, and Solana Beach combined to form the Clean Energy Alliance, one of the southernmost programs in California, in 2019. It has since expanded to include the cities of Escondido and San Marcos, which joined in 2021, as well as Oceanside and Vista, joining earlier in 2022.

Each member agency or city is allotted one active member and one alternate to participate on the CEA’s governing board, with the cities holding one vote without weight, regardless of the municipality’s size. Additionally, the Community Advisory Committee, a separate body that meets bimonthly, comprises two appointees per member agency.

In addition to those entities, the CEA board has appointed an active CEO in Boswell, a board secretary, a chief financial officer, general counsel, and multiple teams of attorneys who specialize in energy transactions and CEA’s participation in the rate-setting processes with regard to SDG&E.

Boswell added that the board approved three new positions within the administration, which will be a procurement manager, an account services and programs manager, tasked with managing implementations and expansions into new cities, and a regulatory analyst.

As each member city is required to designate a default power supply product for its customers, who are automatically enrolled once the city begins receiving power from a CEA, Carlsbad, Del Mar, and Solana Beach all use the 75% renewable energy as their default.

Boswell would later add that customers can switch their usage to a different product at any time without cost.

The benefits of joining the CEA, according to the presentation, included having local control, in that San Clemente could vote to join the Alliance and begin having a voice on decisions that would impact the city even before potentially receiving service in 2024.

“The goal is to achieve balanced distribution of program benefits, commensurate with each member agencies’ percent of load,” she said. “That’s to ensure that each community receives their fair share of those program benefits.”

SDG&E customers enrolled in the California Alternate Rates for Energy Program (CARE), which provides a 30-35% discount on their electric bill, or the Family Electric Rate Assistance Program (FERA), that provides an 18% electricity discount for families whose household income slightly exceeds the CARE limits, would still be enrolled upon a city’s switch to CEA.

CEA also offers a net energy metering program, which pays solar customers a net surplus compensation at the end of a 12-month period if a customer’s system generated more electricity than was used. Boswell said that the compensation rate is at 6 cents per kilowatt hour, higher than SDG&E’s rates that fluctuate throughout the year from as low as 2.2 cents to 5.65 cents per kilowatt hour.

All customers default to SDG&E’s time-of-use rates, but they can choose to opt into the traditional flat rate for the generation portion of the billing.

The presentation also displayed what comprises the average bill for both SDG&E and CEA. CEA bills all charged $44.85 for generation in comparison to SDG&E’s $60.94, but the Power Charge Indifference Adjustment “Exit Fees,” paid by customers switching to a new provider, and premiums of $0.40 and $2.97 for the Clean Impact Plus and Green Impact products, respectively, brought the cost closer to that of SDG&E.

She added that the fee is expected to exist for the next 20 years.

When asked about how CEA secures power supply agreements and the prices the alliance pays, Boswell said it does solicitations similarly to SDG&E for both its nonrenewable and renewable portions.

For nonrenewable energy, CEA enters a “hedge” to get bids for a flat rate, conventional energy; CEA evaluates proposals for numerous solar and wind projects based on cost, location, and developers’ financial viability for renewable energy supply.

She added that while the range of the money the alliance pays in a power purchase agreement is currently between the mid-3-cents-per-kilowatt hour and the low-4-cents-per-kilowatt hour, the cost varies. As the CEA looks to procure power, finding battery storage options and dealing with supply chain issues could drive up the cost further.

Regardless, the prices for electricity depend on what happens within the market, Boswell said.

If San Clemente were to join CEA, customers would likely start to receive service around April 2024, with the CEA starting efforts to secure energy a year in advance.

During the portion of the presentation that described the average bill, and at other points in the discussion, it became apparent that rate savings would not be guaranteed and that they could be marginal in general.

That prompted San Clemente resident Dave Gralnik, who has spent much of his career as a vice president and consultant in the energy industry, to question whether the city would want to forgo saving money if entities such as SDG&E would eventually be required to provide more renewable energy.

“From a community (perspective), we have to decide how green we want to be, and the question will become, ‘Is there a return in terms of how much green (we are) versus savings?” Gralnik said. “How many people will stay? How many people will opt out if they’re not saving enough?”

The CEA informs incoming customers about the service provider change by sending out mailers 30 and 60 days both in advance of and after the automatic enrollment, to allow time for customers to opt-out.

Those who move into homes with and without solar that are enrolled in CEA will remain in the program.

Mayor Pro Tem Chris Duncan asked Boswell if there was any advantage in waiting another year to vote to join CEA to see if customers’ exit fees decrease. Boswell said there was no way to determine that, although Community Choice Energy programs have been competitive historically and have provided some savings.

“Joining a CCE can’t be about savings because it can’t be guaranteed, and there have been times when CCEs have been more expensive,” she said.

“But if this program meets the priorities and the policies that the city is trying to meet, in terms of its climate action plan goals, reducing greenhouse gas emissions and bringing cleaner energy to the community, then I believe we’re a good option,” she continued.