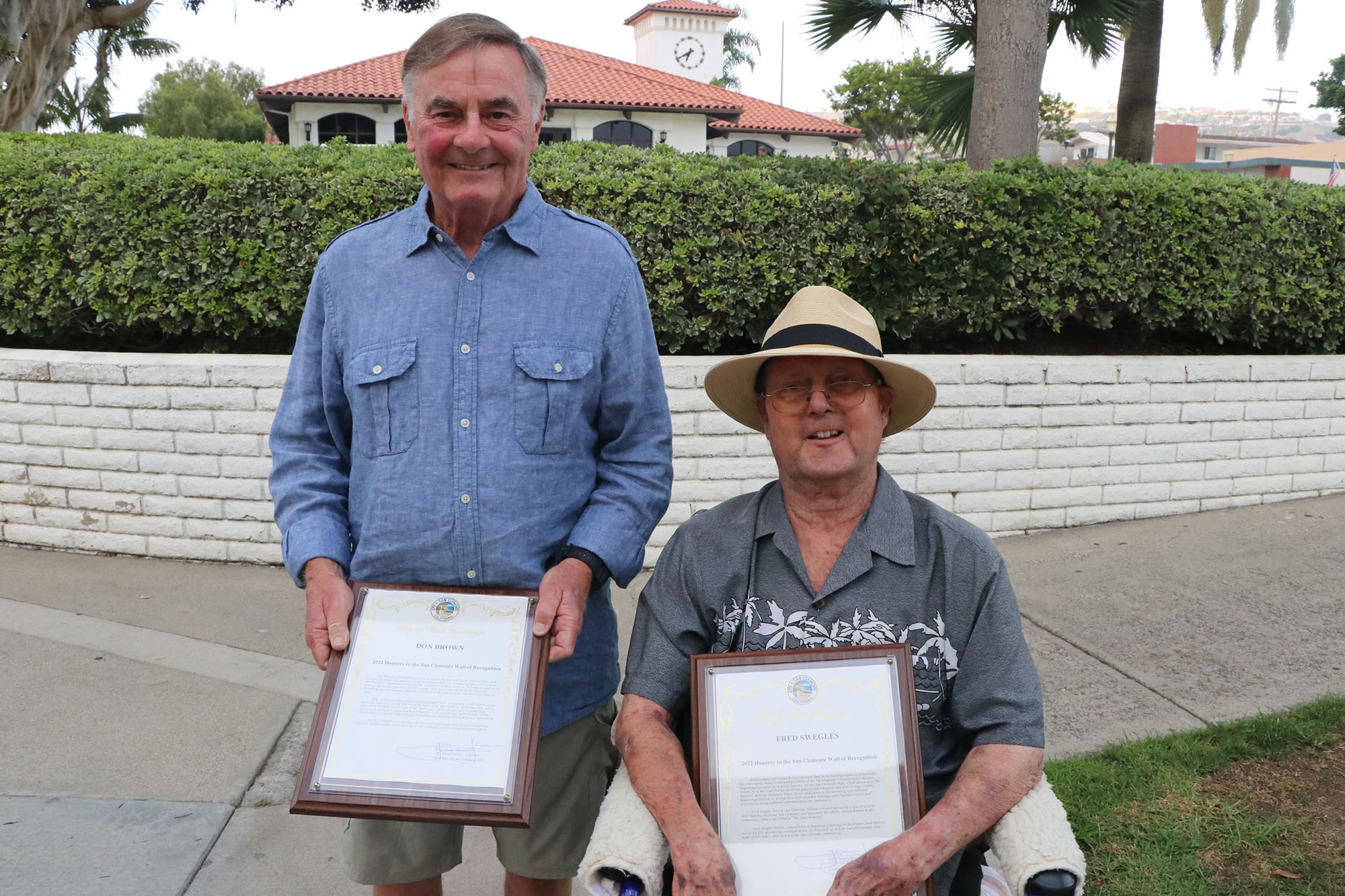 A couple more San Clemente legends were added to the city’s Wall of Recognition on Tuesday night, Aug. 16, as the San Clemente City Council honored their countless contributions to the community.

The council approved the recommendation of the Wall of Recognition Committee to honor Don Brown, 78, and Fred Swegles, 73, who will join 42 other recipients celebrated on the wall in the lobby of the San Clemente Community Center, adjacent to a plaque explaining the reasoning behind the honor’s creation.

Brown, a 13-year resident of San Clemente, moved to the city after spending his professional career as a pilot with the United States Marine Corps, and made an immediate and long-lasting impact.

For 11 years, he sat on the Planning Commission, serving as the chairperson for three of them, in addition to a position on the former Coastal Advisory Committee.

The current president of both the San Clemente Exchange Club and PierPride Foundation, as well as the past president for the Boys and Girls Club of the South Coast Area, Brown has spent innumerable hours working to make the city better for people of all ages.

PierPride, the sponsor behind Brown’s nomination, mentioned his involvement in developing the city’s Master Plan as an example of his efforts.

“Far and away, Don’s greatest contribution to our community was his many years’ service on the Planning Commission,” PierPride’s description read. “Don knows more about our town than anyone. Ask him any question about our town, and he will give you more detail than you thought possible.”

After Mayor Gene James read the certificate of recognition, Brown thanked the City Council for their words before stating how he was proud to be there and blown away by the nomination. He also expressed how honored he was to see and be presented along with Swegles, a longtime newsman and local journalist.

Illustrating the impact that Swegles, a 65-year-resident of the city, has had, a consensus of 10 people comprised the sponsor group behind his nomination for the Wall of Recognition, including longtime resident Mike Chamberlin. Chamberlin wrote about Swegles’ service and value to the community.

“Mr. San Clemente,” according to Chamberlin, was raised in San Clemente and graduated from the high school in 1966 before studying journalism at the University of Southern California.

He reported for the San Clemente Sun Post and the Orange County Register, and most recently he wrote a weekly column for the San Clemente Times. During his career, he’s produced countless articles that helped to document the history of the city and provide a substantial impact to the community.

“His tireless commitment to endless City Council meetings, Planning Committee meetings … all so San Clementeans could be informed on a non-partisan basis,” Chamberlin wrote. “To put it best, I have known Fred for 50 years, and I still don’t know his personal politics.”

Later in Swegles’ career, he traveled the world to find sister cities of the same name, a demonstration of his love for San Clemente that has been unmatched, Chamberlin said.

“After five decades of service to San Clemente, I feel Fred’s name is worthy to be listed among the elite on the Wall of Fame,” Chamberlin finished. “He has done so much for so many. Now, I believe, it is time for the city to do something everlasting for Fred Swegles.”

In 2021, Swegles was diagnosed with glioblastoma, a brain tumor that has limited his ability to come up with words and exhibit his skilled writing. He told SC Times in June that he appreciated the recognition.

“Fred’s always loved San Clemente, his home since 1954, and he’s always had a passion of writing about San Clemente and capturing our beautiful town and its people in his photographs,” Barbara said.

“He loves the people here,” she continued. “All of you, the San Clementeans, are the true jewels in his heart, and Fred thanks you so very much for this award.”

Both Brown and Swegles received a certificate of recognition, as well as an individual plaque to be placed on the Wall of Recognition.