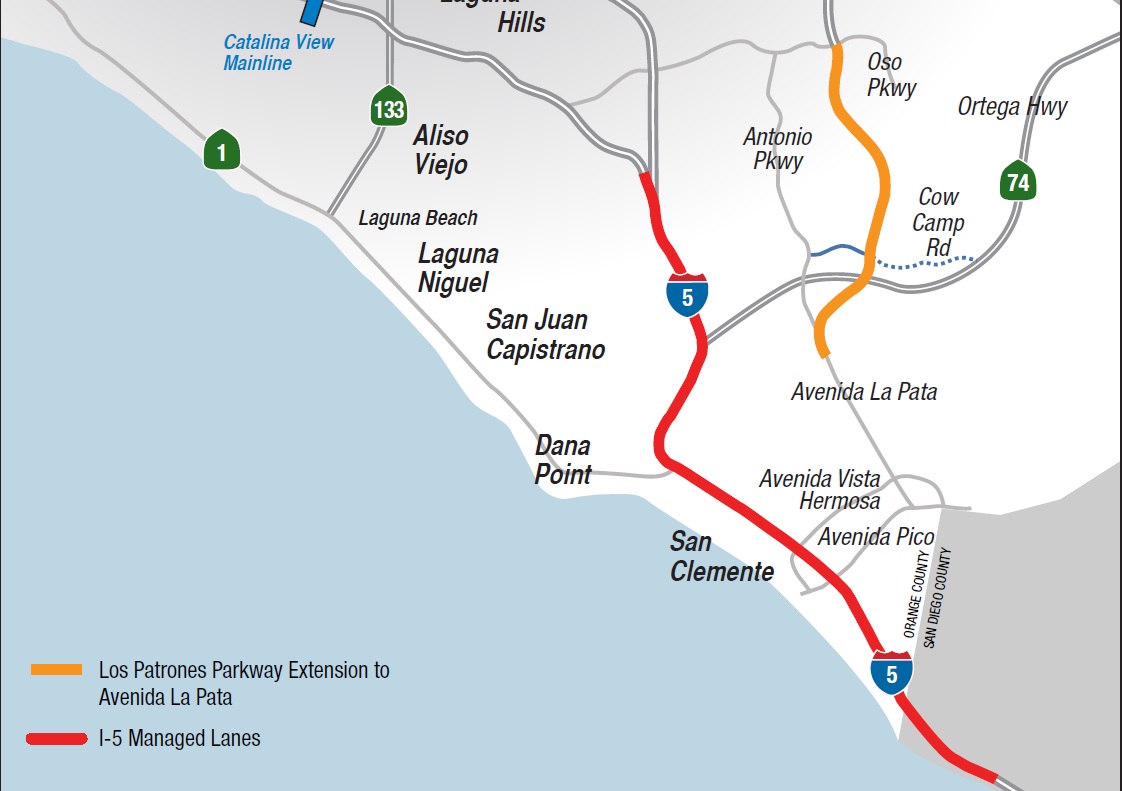 A Compromise in the Works? New Toll Road Alignment Proposal Would Flow into North La Pata

Transportation Corridor Agencies (TCA) came to its Thursday, Feb. 8 meeting with something of a compromise to the proposed toll road extension aimed at San Clemente.

A newly proposed idea was unveiled in addition to the seven the TCA is already studying regarding traffic mobility in South Orange County—four of the existing ideas are toll roads that would be constructed through and the other three enhance existing infrastructure.

The new proposal for the expansion of the 241 would be constructed from its current terminus at Oso Parkway, run through Cow Camp Road and Ortega Highway to Avenida La Pata. The plan would expand La Pata by two lanes in each direction, and it would add “managed lanes” on I-5 from the end of the SR-73 toll road all the way south of the San Diego County line.

Extending the 241 and I-5 was presented as a package deal, but staff members said they would examine the possibilities of examining the two proposals separately.

The extension is being called the Los Patrones Parkway Extension, or LPP.

“The Los Patrones Parkway extension would create a ‘feeder’ to SR-241, similar to how Jamboree Road functions with SR-261,” a slideshow at the TCA meeting stated.

The slideshow also stated that the LPP could be accessible to give Ortega Highway and Antonio Parkway more traffic relief.

The interesting thing about the new proposal is that it wouldn’t complete the ultimate goal of the 241, which was to connect to I-5, but it may be something San Clemente rallies behind in the near future, as it would replace the least favorable route for San Clemente residents, proposed to go through the city, past Avenida Pico and eventually connect to the 5.

OC Supervisor Lisa Bartlett, the county Board of Supervisors representative of San Clemente’s district, said she thought there could be problems with the I-5 project, as Caltrans and Orange County Transportation Authority (OCTA) already design projects for the interstate. Bartlett said she would be more willing to separate the two in order to receive a better avenue for financing.

Some of the TCA proposals could be paid for through toll revenue bonds or development impact fees, according to information provided at outlet community meetings regarding the toll road proposals since 2016. A cost analysis or estimate was not provided for the new proposals during the TCA meeting.

What’s important to remember is that the lines drawn on the map shown at the TCA meeting are not set in stone. They are preliminary ideas that show a general idea. The TCA is currently conducting studies on the seven routes approved, which will eventually go to an environmental review process before any plan implementation begins.

“We said from day one of the ascertainment study that this is a process, and people hate that word, but it is a process,” said Ed Sachs, a Mission Viejo City Council member and the chairman of the Foothill/Eastern Corridor Agency, during the meeting. “Even during the (environmental impact review), there may be other recommendations and options and taking of proposed lines on a map in various directions. This is not a closed shop; we are looking at all things and everything.”

San Clemente City Council member Kathy Ward, the city’s representative on the Foothill/Eastern Corridor Agency, said there is only room for one more lane (without taking out existing structures along the I-5 corridor) along San Clemente’s portion of the interstate, past Avenida Palizada.

“The length of I-5 in our city would have to be widened and would result in the taking of property,” Ward said. “This, while exciting, seems excessive for the corridor. I would question how TCA can do a project on the 5?”

Mike Chesney, the chief strategy officer of the TCA, said it’s “very early” in the concept process and that widening I-5 was part of the ideas left to study. The city is currently seeing the finishing touches on a project that added an HOV lane in either direction from south San Clemente through Dana Point.

There’s also the possibility the LPP could be an arterial, not necessarily a toll road, and Ward said she would like that proposal added to the ideas.

Brian Maryott, the mayor pro tem of San Juan Capistrano and representative to the city on the Foothill/Eastern Transportation Corridor Agency, said he was optimistic about the new route.

“I do think you’ll think you’ll see (the new proposal) develop quickly. My hope is that we see all other routes removed from consideration over a period of weeks, not months,” Maryott said in a phone interview following the meeting. “I think that the short connect is a viable option; I think that’s a good thing.”

Rancho Mission Viejo subdivision could be the most affected by the new proposal, as it will run near and possibly through some of the land it owns.

“We’re still learning about this (proposal) along with everyone else, and we don’t have enough information to make a formal statement, but we will once we review it,” said Dan Kelly, the Rancho Mission Viejo senior vice president of governmental relations and corporate communications, by way of a spokesperson.