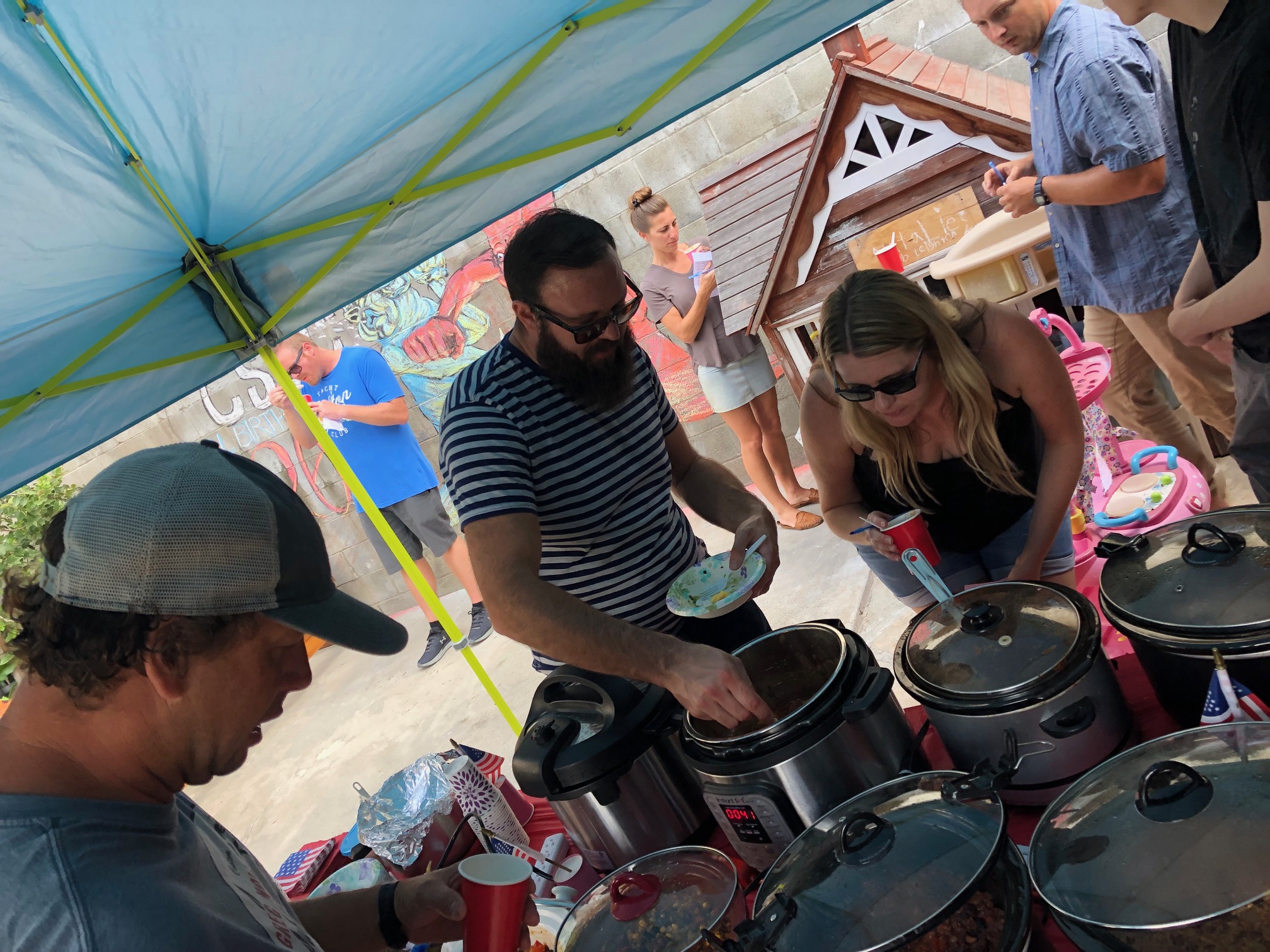 Adam Townsend, San Clemente resident of 15 years, said neighbors in the four apartment complexes in the North Beach neighborhood are good friends and enjoy getting together for parties, especially during the summer.

This year, Townsend and his wife, Laura Lee, had guests coming in to town to celebrate her 36th birthday, and the couple wanted to put together something a little more organized.

They suggested the chili cook-off and soon had 30 to 40 people willing to participate.

Inspired by the grassroots-turned-tradition of San Clemente’s Office Chair Races, Townsend said he was hoping for the same thing with the Calle Sacramento Chili Cook-Off.

“It turned into a really big thing,” Townsend said. “It was such a fun success this year that we want to do it every year as long as we are living there.”

“I loosely followed the recipe from America’s Test Kitchen,” Germano said amid the flashbulbs and media frenzy following the announcement of the score. “It’s not a family recipe or anything. Looks like I’m the one to beat next year.”

Analysts suggested Germano’s decision to eschew vegetables and stick to a classic Texas-style con carne with the best cuts of beef was what gave his chili extra flavor to beat the competitors.

But vegetarian entries also performed well against their counterparts with animal products. Tied for second place was Peter Schelden’s No. 6 vegan chili with habanero and chocolate. Schelden is a former North Beach San Clemente resident, who traveled from Tustin to enter the chili challenge.

“I was a little nervous pitting my vegan chili against all the beef offerings,” Schelden said. “This just goes to show flavor is flavor.”

Jamie Dreyer of Rancho San Clemente was the co-second-place winner with her classic beef and bean, “Mom’s Chili.”

Laura Lee Townsend, whose birthday it was, served as the Chili Cook-Off Grand Marshal and presented the grand prize along with her husband, Adam Townsend, who served as CSCC Commissioner. Jennifer E. White served as Registrar of Chili, collecting entry fees for the prize pot and tabulating scores.

Each judge agreed to taste and score all chilies, awarding each up to 15 points in three categories: flavor, texture and overall experience. The Registrar of Chili anonymized each chili entry by assigning each a number, and volunteer judges scored each by secret ballot.

Plans for a second Calle Sacramento Chili Cook-Off are already in the works for fall of 2020. Contestants will enter to win the newly christened Germano Cup, which will be passed from winner to winner each year.—Cari Hachmann