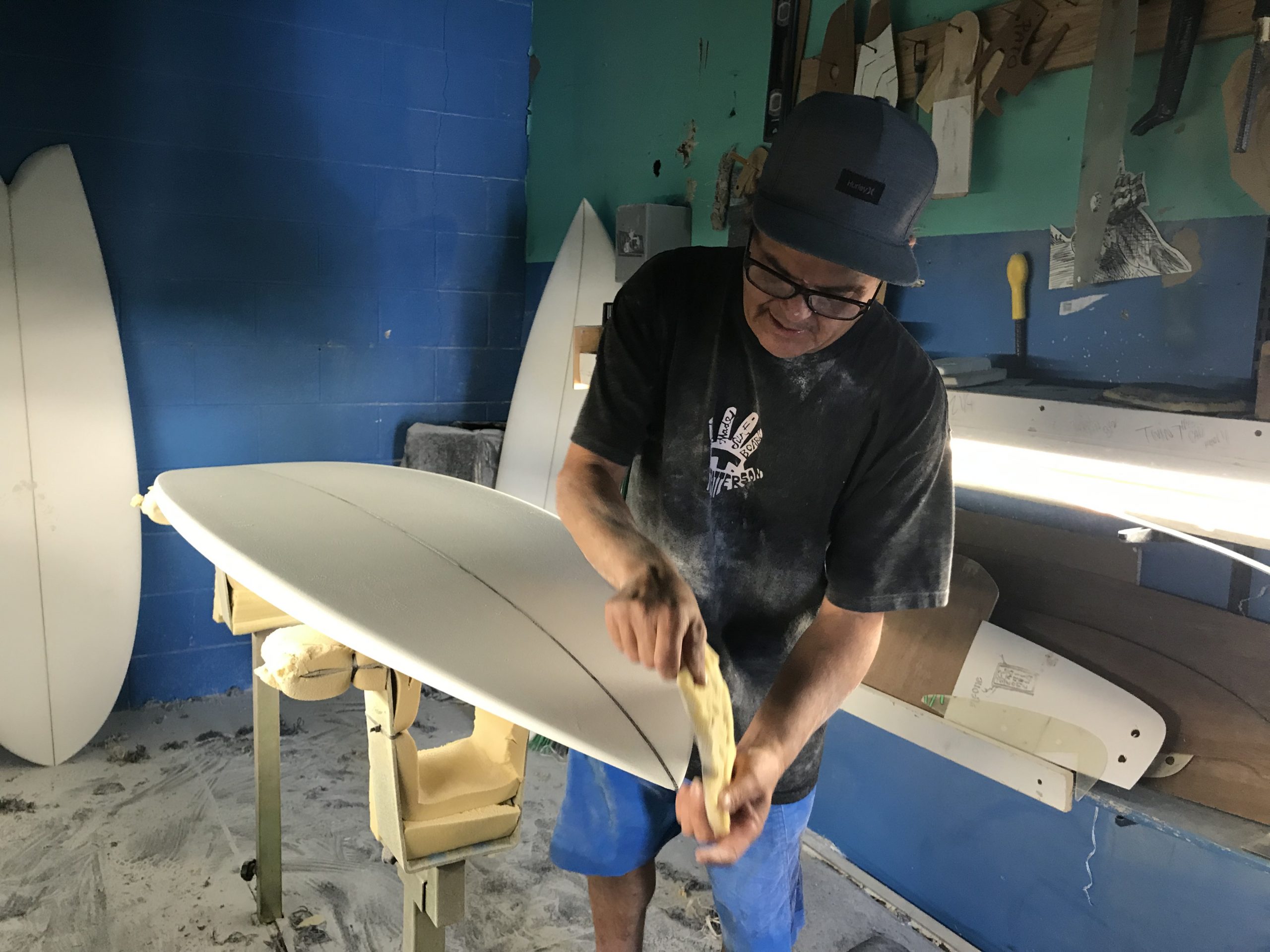 When it comes to getting the new surfboard that’s right for you, there are a lot of options out there. In terms of materials and construction, it’s easy to be confused about what you should be looking for. If you’ve graduated from the Costco Wave Storm and are looking for an actual, real surfboard, the conversation begins with what kind of “blank” to use.

A blank is the foam core from which a surfboard is made. It’s then laminated with a combination of cloth and resin to provide structural integrity and strength. Replacing the wooden boards of old, Hobie Alter and Gordon “Grubby” Clark were the first to utilize foam surfboard blanks in an economically viable way in the early 1960s.

When it comes to surfboard blanks today, there are three basic options of which you should be aware. The three main blank materials that are widely used around the world include Polyurethane (PU), Polystyrene (PS) and Expanded Polystyrene (EPS).

Grubby perfected the polyurethane formula, and from the 1960s through the early 2000s, Clark Foam in nearby Mission Viejo was the de facto blank supplier around the globe. The company was forced to close in 2005 after entanglements with the Environmental Protection Agency. This opened the door for new foam manufacturers to experiment with new materials, including expanded polystyrene, which has been a game-changer.

No type of foam is particularly better than the other; instead, they all provide different performance characteristics that suit the variety of surf conditions we’re greeted with week in and week out.

Polyurethane is the most traditional kind of foam, in use ever since Grubby first cracked the chemical code. One of perks of polyurethane is that it is relatively light, and because of its tight cell structure, it is also very easy with which to work. The fine composition of the foam means that when a shaper runs a planer or sandpaper over the blank, the foam doesn’t bite or come off in chunks. If shaped correctly, the foam will come off in a fine dust. This characteristic gives shapers the ability to fine-tune their board with an attention to detail.

The bummer about polyurethane foam is that it’s not environmentally friendly. It’s a petroleum-based product, and recycling the waste material is more expensive and challenging than expanded polystyrene blanks, for example. And the glassing process is also no bueno for the environment, as well.

The foam that’s been in use the longest after polyurethane is polystyrene. What you need to know about polystyrene is that it’s most commonly used with epoxy resins. There were a lot of issues with early epoxy boards, one of the biggest being that polystyrene is inherently hard to shape and requires a lot more time and effort.

The epoxy composition does add a little more strength and durability, and the lighter boards go well in small surf conditions. Plus, the offcuts and waste from the shaping process can be recycled.

Finally, the biggest growth in surfboard blanks over the past handful of years has been with expanded polystyrene. A derivative of polystyrene foam, its big selling point is that it’s remarkably light.

A lot of small-wave boards that you see today are made with expanded polystyrene cores. If you snapped your board in half, you’d notice it’s the same composition of those cheap “styrofoam” coolers at liquor stores.

Expanded polystyrene foam is notoriously hard to hand-shape, because the tiny foam balls tend to fall apart when hit by a planer or rougher sandpaper. That doesn’t mean there aren’t some great boards being hand-made with expanded polystyrene foam; it just takes a little more time and diligence to get the shape smoothed out. They’re also one of the more environmentally friendly materials out there.

So, there you go, you’re ready to forsake that Wave Storm for a real surfboard. Happy wave hunting!