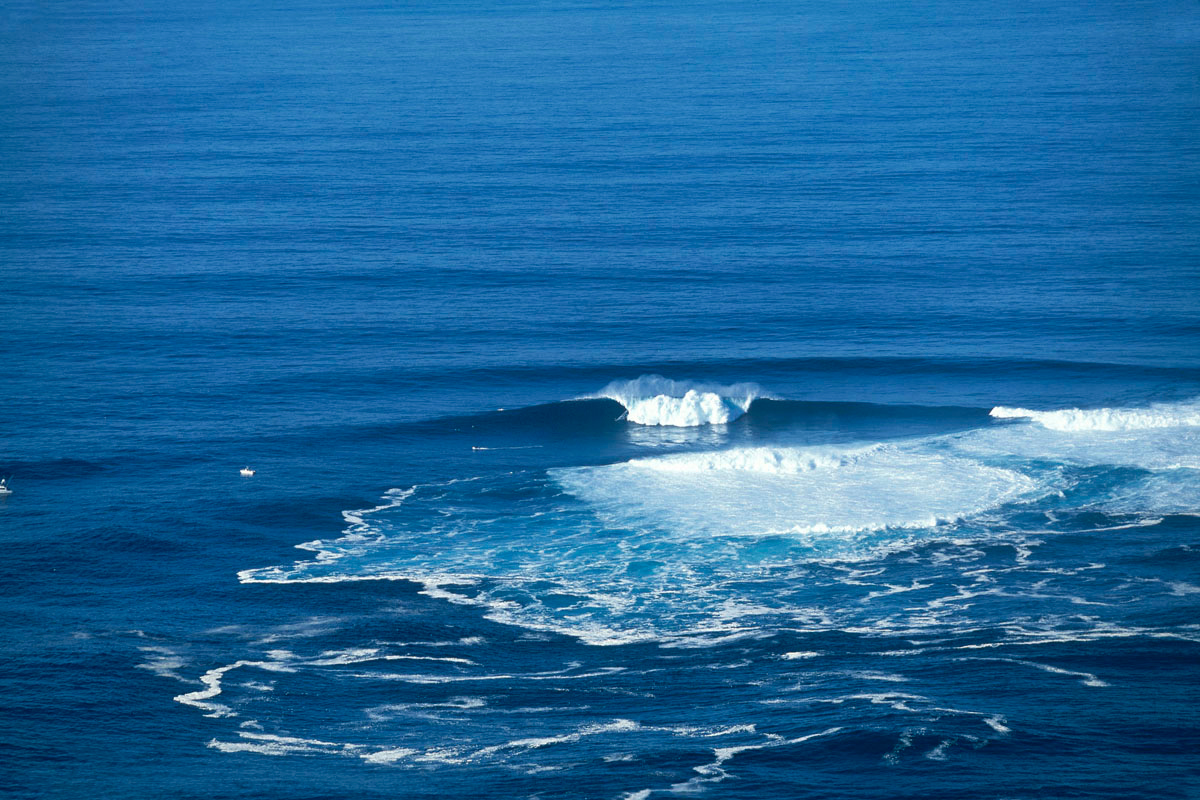 Cortes on the Mind

An undersea mount that rises more than a mile from the sea floor, Bishop Rock, the shallowest part of the bank, is a mere three to six feet below the surface. They were convinced this was the world’s next great big wave break.

For the most part, Cortes Bank has served as nothing more than a nautical nightmare over the years. On Nov. 2, 1985, the nuclear-powered carrier USS Enterprise ran aground on Bishop Rock, tearing a large hole in the ship’s hull. But by the mid-’90s, after scouring logbooks and making several recon flights out there, the surf potential of Cortes Bank was obvious.

“It opened up a whole new realm,” Collins told me in 2007. “Getting it good was never going to be easy. There are so many variables that are far out to sea, but we saw it as the place where a 100-foot wave could potentially be ridden.”

In 1995, Bill Sharp, currently director of the WSL Big Wave Awards, brought a pair of surfers out to Cortes. The conditions were clean and glassy, the surf was about 15 feet—tame by big-wave surfing standards. Armed with the knowledge that the wave could actually be ridden successfully, Sharp and company waited while Collins watched the weather. Then, during the winter of 2001, “Storm 15” formed in the Gulf of Alaska.

Loading up on the F/V Pacific Quest out of San Diego, big-wave tow surfers Ken Collins, Peter Mel, Brad Gerlach and Mike Parsons, plus paddle-surfers Evan Slater and John Walla, set out to make history. On the morning of Jan. 19, 2001, they arrived at Cortes Bank and were greeted by oil-glass conditions and enormous, half-mile long waves breaking across the reef.

Collins, Mel and Gerlach all rode waves measuring in the neighborhood of 50 feet. But Parsons, who grew up surfing Salt Creek, stole the show on his very first ride. Estimated at 66 feet on the face, it won him the first of two Guinness World Records and the Swell XXL Biggest Wave Award prize of $66,000 for the biggest wave surfed in 2000-2001.

Meanwhile, Walla and Slater tried to paddle for a big wave and both nearly drowned. Larry Moore photographed from a circling plane, while filmmaker Dana Brown shot from a boat for his surf film Step Into Liquid.

“We had no business being in the water on that day,” says Slater. “It was big, but not as big as it could get. It demonstrated to all of us that the place was capable of a lot more.”

On Jan. 5, 2008, Parsons and Gerlach returned, this time with big-wave understudies Greg Long from San Clemente and Grant “Twiggy” Baker from South Africa. In one of the worst storms ever recorded off the coast of California, Parsons was photographed on a wave bigger than his award-winning ride of 2001. Initially estimated to be more than 70 feet on the face, it was later determined to be at least 77 feet, which gave Parsons a second Guinness World Record.

“I was sure we were going to die on that trip,” says Matt Wybenga, who shot video of the session. “My footage was useless; the seas were way too big. It was complete chaos. I’m really surprised nobody died out there. There’s nothing around for 100 miles, you’re completely alone out there, and the waves are bigger than anywhere in the world. It was madness.”

On Dec. 21, 2012, Long nearly lost his life surfing Cortes. Thankfully, before pushing away from the dock, safety-minded Long made sure that contingency plans were put in place. The preservation of life is a paramount concern, more so than riding the biggest wave, and in the case of Long’s Dec. 21 session, it paid off.

After sustaining a wipeout on a 20-footer—a wave ridden alongside McNamara—Long failed to resurface. After being hit by a series of four more waves, he was found by three lifeguards on rescue jet skis.

“I began regaining consciousness during the ride back to the support boat we were operating from,” Long said in a press statement after the accident. “I was stabilized onboard the boat by the lifeguards and paramedics who were part of our safety team, and a Coast Guard helicopter was summoned to transport me back to San Diego.”

Long has since recovered fully and continues to charge, as well as be an outspoken advocate for the ocean.

The past few years have seen big-wave surfing push boundaries like never before, and with winter here, it begs the question, what’s next?