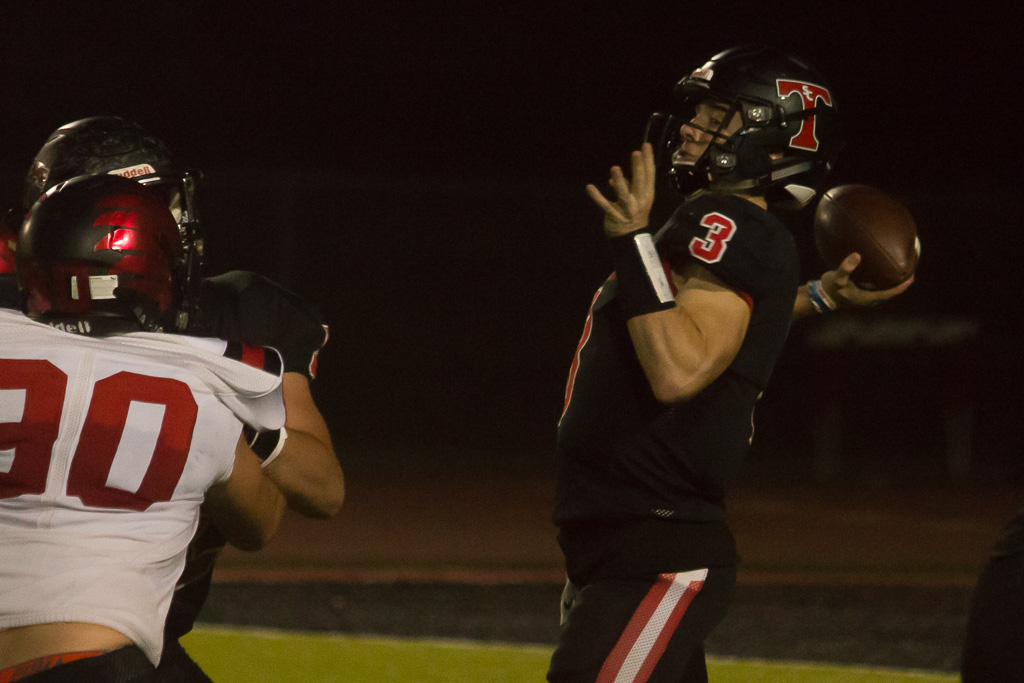 Costello All In for Oklahoma State, Bein and Lush Sign to Colleges on Early Signing Day

San Clemente senior Brendan Costello is all in for Oklahoma State.

Costello officially signed his National Letter of Intent at 7:15 a.m. on Wednesday morning just after the early signing period opened. After a day of finals in the classroom, the Triton quarterback was livestreaming decisions of potential future teammates and anxiously awaiting to see if he had another target to throw to.

The Cowboys eventually signed the wide receiver the team and Costello were looking for, and they got Costello with his name officially on the page.

A great start to the morning with 3 of our Tritons participating in our signing ceremony. You can bet that we are not done yet as we continue to work to send our players to the next level. All part of the process at #onetownoneteam pic.twitter.com/TcGyCWzn3r

“It’s pretty relieving,” Costello said. “It’s a lot of stress off my shoulders. I’m very blessed to be in the program, and I’m focused on getting started there.”

In his senior season, Costello threw for 2,328 yards and 22 touchdowns and ran for 658 yards and nine touchdowns as San Clemente rallied from a 1-4 start with a six-game winning streak on the way to its first South Coast League title since 1999 and a CIF-SS Division 1 playoff win. Costello showed he was ready to add his name to San Clemente’s list of NCAA Division 1 quarterbacks.

Costello’s numbers drew in-season offers from Georgia, Michigan State and Utah, but he stayed true to the verbal commitment he had made to Oklahoma State in June.

“I stayed firm to Oklahoma State,” Costello said. “I was really happy with them. They were my first big-time offer, and it’s a great family atmosphere over there. I think we’re going to do something really special. It’s a great offense for me, and it was the best fit.”

Costello is getting right to it for the Cowboys. The senior is graduating after this semester and will get to Oklahoma State for the start of the spring semester on Jan. 9 in Stillwater. Getting signed early and onto campus was important for Costello.

“Early enrollment is a big benefit in college football,” Costello said. “You get your head in the playbook earlier, get in the weight program earlier, get used to the speed of the game and get acclimated. A lot of your friends are just starting their second semester in high school, and you’ve got to get acclimated to being independent.”

Costello is ready to throw himself into that competition.

“Everyone has the opportunity to compete,” Costello said. “When I was there (at Oklahoma State), one of the players was telling me that after every season, everyone starts with a clean slate. Everyone’s going to compete for their job. It will help me get into the playbook.”

Costello is also ready for yet another change in scenery.

Costello was born and spent his early years in Massachusetts before coming west with his family to California. He began his high school career at Santa Margarita before transferring to Mission Viejo for the spring of his sophomore year. Costello then transferred to San Clemente, where he led the Tritons as a junior and senior.

Now, Costello goes from taking in both coasts to settling in the middle of the country in Oklahoma.

“It’s been eye-opening,” Costello said of his lifetime of travels. “I get to see a lot of different lifestyles. My parents joke that I could be a politician seeing all these different parts of the country. I’m excited to see a new lifestyle in the Midwest.”

Costello was joined on Wednesday by punter Charlie Bein and lineman Wakely Lush.

Bein signed on to play at the Air Force Academy in Colorado Springs. Bein had been committed to Air Force for some time and is one of the best punters in Southern California. The kicker should welcome the thin air of the Rocky Mountains where his booming kicks will get more space to fly.

Lush began the season as a tight end but shifted to offensive line and started to see offers come in. Lush signed on as a preferred walk-on to Stanford. Coach Jaime Ortiz has pushed him as a true student-athlete with a 4.5 GPA and a score of 31 on the ACT.