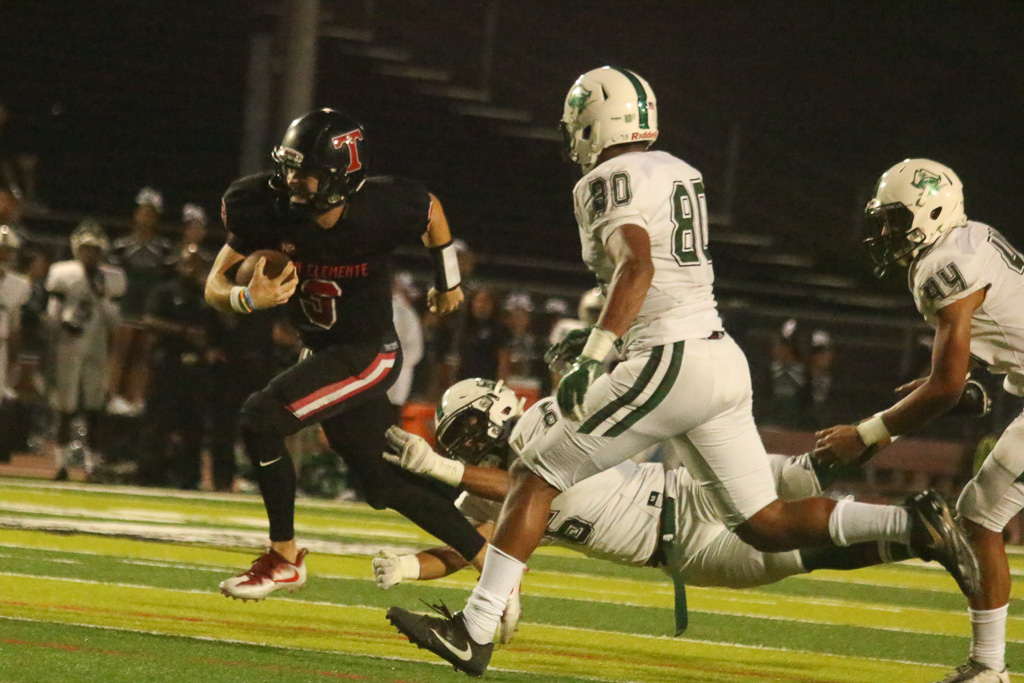 Another tight game, a three-point lead over Tesoro, with three minutes remaining for the fourth time this season.

The Tritons put the ball in the hands of their senior, Oklahoma State-committed quarterback and, this time, pulled off the road escape.

Brendan Costello evaded Tesoro pressure four times on four runs on the drive, including a 52-yard, game-breaking touchdown run to add to his 225 yards passing and two passing TDs, to ice Tesoro and win their South Coast League-opener, 24-14, on Friday at Tesoro High School.

TD: For the fourth time on the drive, Costello escapes the Tesoro defense and this one breaks for a game-breaking 52-yard touchdown with 2:51 remaining. San Clemente leads Tesoro, 24-14. @Tritonfootball @SCHSTritons @brendancostello @SCTimesNews pic.twitter.com/pUGil2VbPl

“There’s three minutes left in the game,” Costello said. “We need to run the clock out and get into the end zone. My tackle, Wakely Lush, threw a really good block. I probably wouldn’t have scored that without him. My receivers down field threw really well blocks. The mental state was to get into endzone and that’s what we did.”

San Clemente (3-4, 1-0) had lost its previous three tight contest in a gauntlet nonleague schedule, but when Tesoro (4-3, 0-1) pushed back late, the Tritons were up to the task.

“We’ve had the experience,” Costello said. “We’ve been in really, really tight games, so it’s nothing new to us. I think having that really helped us. It didn’t rattle us. Defense played really well, and we got the ball back at the end. We got the big run at the end, and it’s a big team win for us.”

San Clemente’s defense rounded into form and was huge for the Tritons with five sacks from five different players and a game-clinching interception by Trenton Brail on Tesoro’s final drive. Harrison Thomas, Ben Skeffington, Ryan Altman, Andrew Luzi and Kade Coury pulled down the sacks for San Clemente.

“After the Murrieta Valley, we had a defensive meeting,” Ortiz said, “a kind of ‘coming to Jesus’ on what we were doing and what we had to do. We made some changes personnel-wise and scheme-wise. I credit our coaches for revamping things.”

The Tritons continue with South Coast League play next week as they host El Toro for Homecoming on Friday, Oct. 5.

San Clemente looked like it was going to pull away and win the game in a somewhat routine fashion.

The Tritons took their first drive of the second half for nine plays and 62 yards that was finished on a 25-yard touchdown pass to Jaydel Jenkins, his first catch of the game, for a 17-0 lead.

However, Tesoro found some life on the next drive.

The Titans converted their first third down of the game on the possession and followed up with a 30-yard touchdown pass to Justin Schafer to cut the lead back to 10 points.

San Clemente then turned its mission to killing the clock as it took a 14-play drive into the fourth quarter, but the drive ended on a missed 39-yard field goal.

The game lost its juice as the teams traded short drives, and it looked like the game would end as it stood.

Then San Clemente fumbled a hand-off, and Tesoro recovered at its 33-yard line with just over five minutes remaining to make the Tritons start to sweat.

San Clemente came up with two sacks on the drive, but Tesoro overcame with a 38-yard touchdown on a perfectly executed crossing route by Schafer to cut the lead down to three points, 17-14.

“Little closer than I wanted it to be in the second half,” Oritz said. “I made a couple bad calls that put us in a bad position. The kids responded back, and Costello with that long touchdown run, kind of a back-breaker, iced the game for us. It’s nice to see our play-makers come through in that second half and make some plays and finish the game like we should the last two weeks in a row.”

The Tritons controlled most of the game.

San Clemente opened the game with a 10-play drive, but the Tritons were stuffed at the Tesoro 25-yard line.

Tesoro was forced to punt on the ensuing drive but didn’t get out of their end of the field. The snap went over the punter’s head, and the short kick went out of bounds at the Tesoro 30.

San Clemente settled for a field goal and got on the board as Cole Thompson knocked in the 41-yard kick, 3-0.

The Tritons’ defense held strong again and did all half as Tesoro went 0-for-4 on third down conversions in the first half.

San Clemente punter Charles Bein placed two expert punts in the first half to pin Tesoro at its own four and seven-yard lines.