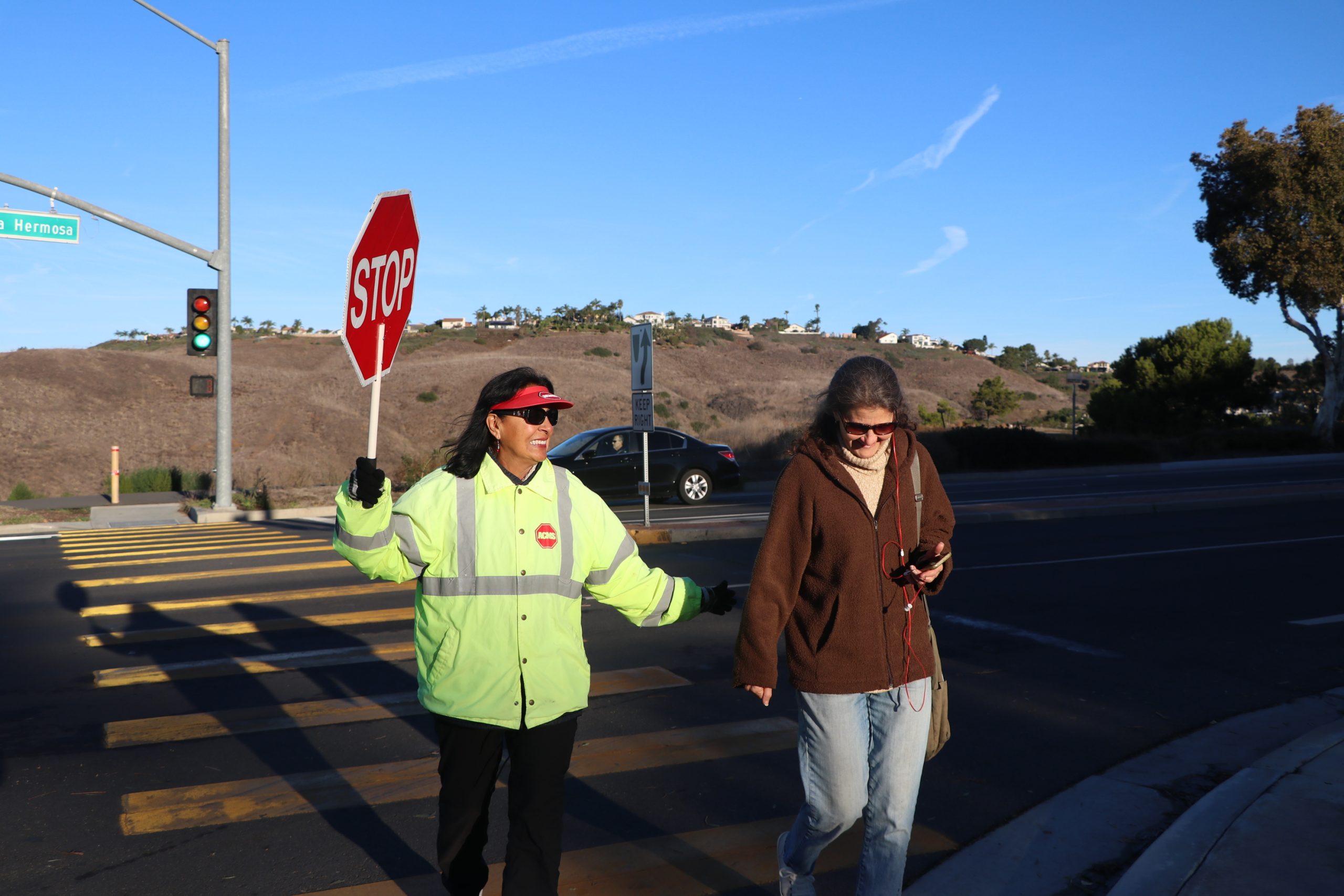 Featured Image: Elizabeth Sullivan, a San Clemente crossing guard for about 20 years, escorts Marblehead Elementary School teacher-assistant Laurie Headrick across the Vista Hermosa and Via Turqueza intersection on Wednesday morning, Dec. 15. Five more crossing guards like Sullivan will soon be stationed down Vista Hermosa, near Shorecliffs Middle School, to help manage a well-known and dangerous intersection near the I-5. Photo: Shawn Raymundo

Parents of Shorecliffs Middle School students can now breathe easier in the morning, as the City Council unanimously voted last week to add five crossing guards near the campus.

The move is another step in an ongoing saga in which local parents and teachers have worried about young students’ safety in crossing the intersections of the Interstate 5 northbound on- and off-ramp and Avenida Vista Hermosa.

The council voted to amend the city’s crossing guard contract for the 2021-22 school year, stationing an additional three guards to the I-5 and Vista Hermosa intersection at the start of the next semester. Originally, the meeting agenda solely listed a $16,077.60 appropriation to add two guards to the intersection of Vista Hermosa and the Outlets/Shorecliffs access road.

Kiel Koger, San Clemente’s Public Works director and city engineer, said the city will spend an additional $25,000 to station the three guards near the I-5 intersection.

Safety concerns reached their highest peak after a reported incident on Aug. 25 in which a child riding an electric bike was struck by a vehicle that was trying to turn onto Vista Hermosa from the I-5 exit.

The driver posted details to Nextdoor and planned to speak at the council’s Dec. 7 meeting, but didn’t get a chance to because a public hearing on another subject ran long. Several other parents and children who attended to advocate for the student safety measures also left early.

Amy Swanson, a mother of a Shorecliffs student whom she noted did not walk to school due to the previous dangers of the route, did speak at the meeting. She filed an inquiry and request to the City Council several months ago that eventually brought the contract amendment to the meeting agenda.

Swanson said in an interview on Dec. 10 that she had crossed the I-5 intersection many times, and that it makes her and other parents in the Marblehead community “very nervous.”

“After the Nextdoor post, a parent reached out to me and asked me if I might weigh in to the situation to see if we can get a permanent fix on that,” she continued.

She went on to call the city, the California Department of Transportation, and CUSD Trustee Lisa Davis to determine who had the responsibility for adding crossing guards and fixing the intersection.

During Swanson’s public comment to the council, she voiced her displeasure with the city staff’s agenda report that neglected to include a conclusion that crossing guards were needed at the I-5 intersection, in addition to the one at the Vista Hermosa/Shorecliffs access road.

Mayor Gene James said after the public comments had ended that there was a general public consensus that the way in which the northbound exit was “terribly” engineered.

“Anyone who’s ever made a right on a red (light) there will know that in order to make that right on a red, you as a driver … do have to put yourself all the way into the crosswalk lane,” James said.

James then made a motion to provide the additional three crossing guards at the I-5 intersection, which received support from the other councilmembers, who also commented on the danger of the area.

Koger explained that the city didn’t recommend the addition of three crossing guards at the I-5/Hermosa intersection because it only met one of the three necessary criteria: pedestrian volume, conflicts with vehicles, and sight distance for drivers.

He also responded to the criticism that the city was conducting a “wait-and-see approach” with Caltrans, which could also step in to help fix the matter. He said city staff was waiting for the state agency to finish its study of the intersection before revisiting whether to add guards.

Caltrans was looking into the geometry of the area at the time of the council meeting, according to Koger.

Cars taking the Vista Hermosa exit can make a “free right turn” in a lane that is uncontrolled by a signal but has pedestrian access. The turn is approached by vehicles coming from the direction of the Outlets at San Clemente and heading onto the I-5 northbound freeway.

“Ultimately, it would be amazing if they would put pedestrian access on both sides of the road, and bike lanes, and all of the things that you need for good pedestrian travel, but that would require redoing the bridge, and I don’t see Caltrans doing that,” Swanson said on Dec. 10.

She added that with the incoming movie theater at the Outlets at San Clemente that will draw children, she and other parents know more needs to be done.

The amended contract is meant to address the urgency of the matter while the city waits for Caltrans to conclude its study and take any action.

“The City Council’s unanimous decision to approve crossing guards to add safety for our children walking to and from school is a very good step in addressing that bridge at the I-5 intersection,” Swanson said.

The San Clemente Times reached out to both the Orange County Sheriff’s Department and Caltrans for comment. Neither was available to provide comment by the time this story was posted.