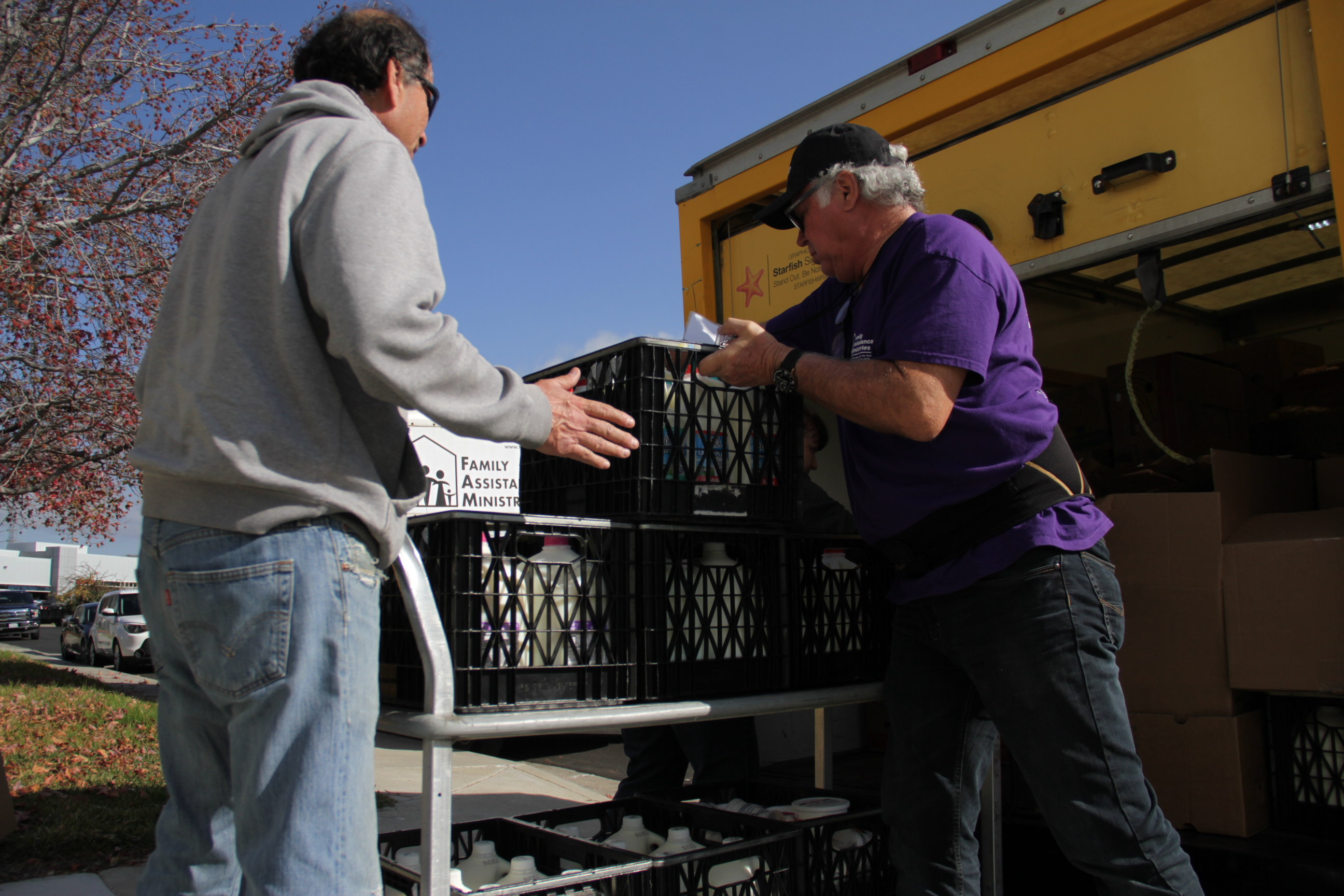 Featured Image: (From left) Dan Abalos and Richard Bartolo, volunteers with Family Assistance Ministries, unload a truck filled with foods that the nonprofit used to help feed families in need back in January 2020. Photo: Shawn Raymundo

With about 100 volunteers for the Family Assistance Ministries organization in attendance at the San Clemente City Council meeting on Tuesday, July 19, the council voted, 3-2, to extend the nonprofit organization’s lease on city-owned property for another year.

Mayor Gene James and Councilmember Kathy Ward voted against the extension, which will allow FAM—an organization that provides support to families struggling financially and on the brink of becoming homeless—to remain at 1030 Calle Negocio through the spring of 2024.

The meeting was mired with confusion over whether FAM wanted to remain at the current building, as multiple councilmembers said they believed that the organization desired to leave, based on previous discussions.

In a July 13 letter sent to the council, FAM CEO Elizabeth Andrade stated the nonprofit intended to relocate its headquarters by April 2024, 12 months past the original lease that would end in April 2023. Andrade cited the COVID-19 pandemic’s acute impact on FAM’s finances, as it devoted its resources to staying active and serving the community.

FAM offered to pay up to $10,000 monthly during the extension, but preferred that the city keep the existing $6,500 rate, according to the letter that was included in the city’s staff report.

FAM leases the city-owned site at a reduced rate, and for the past 11 years, according to the city, has received more than $1.2 million in financial support from the local government. Based on current market rates, the city said the lease is worth $13,400 a month—$6,900 more than what FAM pays.

When the council called on Andrade to give a short speech on Tuesday, she said the organization was proud of its partnership with the city and the results it has created.

The current location allows FAM to support the community and its model of decentralized care and services in its efforts to end hunger and homelessness through case management, Andrade explained.

“We believe that, in order to support someone’s ability to be self-sufficient, we must address the root causes that are creating their instability,” Andrade said of FAM’s services. “We use food as an invitation for our community to engage with us so that we are able to build a relationship with them and build that trust, so we can connect them to the appropriate resources.”

Echoing the sentiments in the letter written to the councilmembers on behalf of FAM, she highlighted that the city has funded a successful program that directly supports the community through Community Development Block Grant monies and other channels.

Based on a breakdown of funding sources that FAM provided in its letter, the nonprofit received $34,000 in cash support from the City of San Clemente, making up roughly 1% of its total funding for Fiscal Year 2022, which ended on June 30.

As for services and aid provided to San Clemente residents, FAM allocated about $2.51 million, or 61% of its overall funds, during the previous fiscal year. In total, 75% of FAM’s program aid funding supported San Clemente and Camp Pendleton residents.

“In addition to cash contributions, we receive in-kind support, over 90% of which is food, which is generally distributed based on population and need,” Andrade said in the letter. “A disproportional amount of in-kind support was received by the residents of San Clemente as well.”

Andrade’s letter also highlighted the impact of FAM’s Homeward Bound program, which, as of the date of the letter, assisted a total of 141 homeless individuals, with 81 of them who were living on San Clemente’s streets being relocated back to their hometowns.

During the meeting on Tuesday, she announced that as of Monday, July 18, that number grew to 82 individuals assisted.

“We can’t do this alone,” she said. “We bring this forward as a point of strength in our partnership and appreciate the extra time to present today.”

When asked by Ward whether the organization had considered the logistics of a potential move, Andrade said FAM would rely on the community to identify support and leverage existing resources.

Andrade said that FAM’s top priority is to stay in San Clemente, but the staff may expand their search given the difficulty of finding vacant options within the San Clemente market. Remaining in the city would allow FAM to keep its desired model of a home base in town and satellite operations in nearby cities.

“That really is the intention here, to use that additional year of the lease extension to solidify the plan, hopefully have a little bit of a break in the market—we can only hope—and then mobilize our resources to that end goal,” Andrade said.

Ward said she did not foresee an opportunity coming available within the next 12 months, and referenced that she had heard that FAM leadership wanted to leave for a more central location. She said that conversation affected how the council discussed FAM, going forward from the previous five-year extension with the expectation that the organization would eventually move, although the city would still be supportive.

After clarifying the extension would keep FAM in town until April 2024, Andrade reiterated that through talks with her board of directors and other leaders, the nonprofit wanted to stay in San Clemente.

Ward’s concern was that the city was subsidizing FAM, especially with rent, while the organization has branched out and collaborated with cities such as Lake Forest and Laguna Niguel.

“I don’t understand why FAM—because you have so much support here and you have built it in 22 years in San Clemente—would not go to the other cities and get more from them, because they only have FAM,” Ward said.

She had difficulties understanding why the organization would not spread out from where it got its financial support.

In response, Andrade stated that FAM’s proposal of paying up to $10,000 monthly would be fairer to the city in the sense that the organization would be stretched by not allocating those extra dollars to its programs.

Councilmember Laura Ferguson noted the information in the letter proved that San Clemente was “certainly getting more than (they’ve) put in.”

To strengthen communication between FAM and the city, Mayor Gene James suggested to Andrade that the council appoint a councilmember to serve on the FAM Board of Directors and observe the board’s decisions.

Andrade said such an action would change the organization’s bylaws and would need further discussion by the board, saying that might pose a conflict of interest.

However, she said FAM would be open to additional engagement options if necessary, which would serve on top of what she called a high level of communication.

Mayor Pro Tem Chris Duncan and Councilmember Steven Knoblock both voiced their support for the extension.

“The fact that they will be moving, that FAM has expressed a desire to move, I think we ought to do everything we can to ease that transition,” Knoblock said. “I think we ought to grant the lease and give them rent concessions by not increasing the rent—in my opinion, we ought to reduce the rent to make the transition easier.”

Ward made the first motion to approve the one-year extension at a monthly rate of $10,000, although Ferguson commented that she believed that number was punitive.

Ferguson also expressed her support for the organization’s contributions.

After several FAM board members stated during the public comments portion of the discussion that the organization did not want to leave San Clemente, Knoblock said he believed them after previously being under the impression the extension would allow FAM to move away from the city.

James said he felt the council was getting conflicting messages from FAM, in regard to what he called reliable sources telling him the organization wanted to move because its current building did not meet their standards. He added that he would not support a rate less than $10,000.

To clarify, Andrade said that FAM understood that the city wanted to sell the property at 1030 Calle Negocio, and that any comments about the building not meeting the organization’s needs might have been misconstrued with the perspective within FAM that future planning would be hard to do with the city’s plans to potentially sell.

“I can tell you today, our lease indicates that we are responsible for what’s inside of the building and on top of the building, and that includes the roof,” Andrade said. “We know that the building is not falling apart; it is well-maintained. We pride ourselves in creating a dignified space for the people that we serve, as well as our volunteers and our staff.”

She confirmed that FAM wanted to remain at the current building, and if the city decides to sell, then FAM would need more time to determine its future.

Knoblock motioned for the council to approve the yearlong extension at the existing rate, which Duncan seconded. Knoblock added that the extension would be made with the assumption that city and FAM officials meet to discuss the organization’s future five or 10 years down the line.