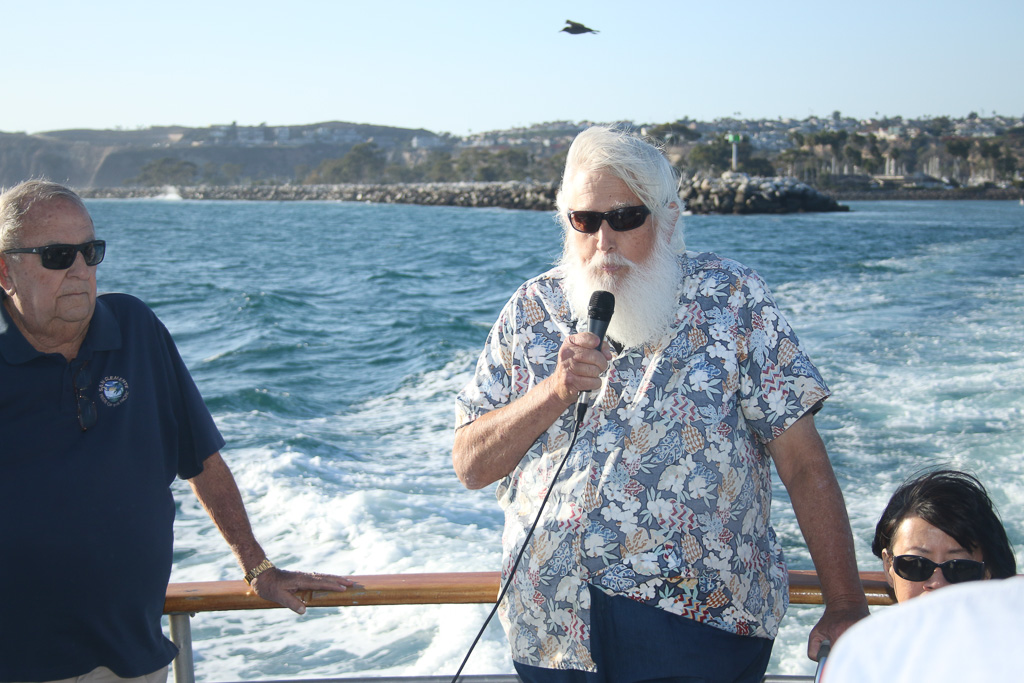 Featured Image: Ken Nielsen, pictured here on the right speaking during an October 2018 cruise that PierPride Foundation hosted, died on Sunday, May 22, at the age of 75. Photo: File

Longtime San Clemente resident Ken Nielsen, a sea captain, ocean researcher and active figure around the city, died on May 22 at 75 years old.

To those who knew Nielsen, he was a community activist, always staying involved in numerous organizations and efforts to improve San Clemente. And to his family and loved ones, he was a caring and gentle individual.

“He was the most loving father,” Jennifer Cuda said of her father. “There wasn’t a day in my life that I didn’t feel loved by him. Everyone knew that if you knew my dad, you knew he loved you.”

Kristine Bonnot echoed her sister’s sentiments, stating, “I love my dad, and there was no one else like him.”

Also speaking with San Clemente Times on Tuesday, May 31, Maureen Nielsen, Ken’s wife, said succinctly said, “He was the love of my life.”

During last week’s City Council meeting, Mayor Gene James took a few moments to talk about Nielsen, who lived in San Clemente for more than 68 years, honoring him as another “absolute icon” who has passed in the past year.

“Kenny was a commercial fisherman with extensive knowledge of Southern California coasts, spanning from San Diego to Santa Barbara,” James said. “Kenny’s love for the ocean and San Clemente began in 1960, when he worked on the fishing boats and at the tackle box-fishing gear bait store on the San Clemente Pier, until the fishing boats moved in 1971 to Dana Point.”

James added that Nielsen was a member of the first graduating class of San Clemente High School in 1965.

Maintaining his Triton spirit decades later, Nielsen, Cuda explained, helped to organize the 40- and 50-year high school reunions. According to Cuda, he also had a hand in the creation of the Triton sculpture in front of San Clemente High that Bill Limebrook crafted.

Nielsen, though, was a man of the sea, and spent his entire life on the ocean, starting from his time working on the fishing boats to owning his own business, Sea Ventures Environmental Services, which he owned up until his death.

Nielsen’s passing comes a few months after the death of his longtime friend, Don Hansen, the founder of Dana Wharf Sportfishing & Whale Watching.

Donna Kalez, Hansen’s daughter and the chief operations officer for Dana Wharf, said the Hansen family, “including my dad from heaven,” was heartbroken by the news of Nielsen’s death.

“I can’t imagine a time when I did not see or talk to Kenny,” Kalez said in an email, noting that Nielsen had worked for the company in the ’70s. “He was the definition of the gentle giant, a man not just physically big but in everything he did; he did it so well and with pride.”

“We will all miss him,” she continued. “He mentored both my brothers. As for me, he encouraged me to get involved in the community along with my dad and get on the board of the Doheny Beach Foundation, a group he loved, as well as PierPride (Foundation).”

Over the years, Nielsen had volunteered countless hours to many different organizations, serving on the city’s Coastal Advisory Committee from 2000 to 2014, as well as with PierPride, and the Surfrider Foundation. He was also a neighborhood watch captain and a volunteer with local state parks.

“In addition to all that, Kenny was a good friend to me,” James said at the May 25 council meeting. “I would look forward to his phone calls after every meeting. He would critique me on what I did wrong, and he would congratulate me on what I did right.”

“He was truly blessed to have the best family, his wife and two daughters, along with his amazing friend group,” Kalez said.

Though an official date has not yet been set, Jennifer Cuda said the family is planning to have a memorial for Nielsen at Doheny State Park sometime in July that the general public is welcome to attend.

Editor’s Note: This story has been updated since its initial posting on May 26 to include additional comments from the Nielsen family and his friends.