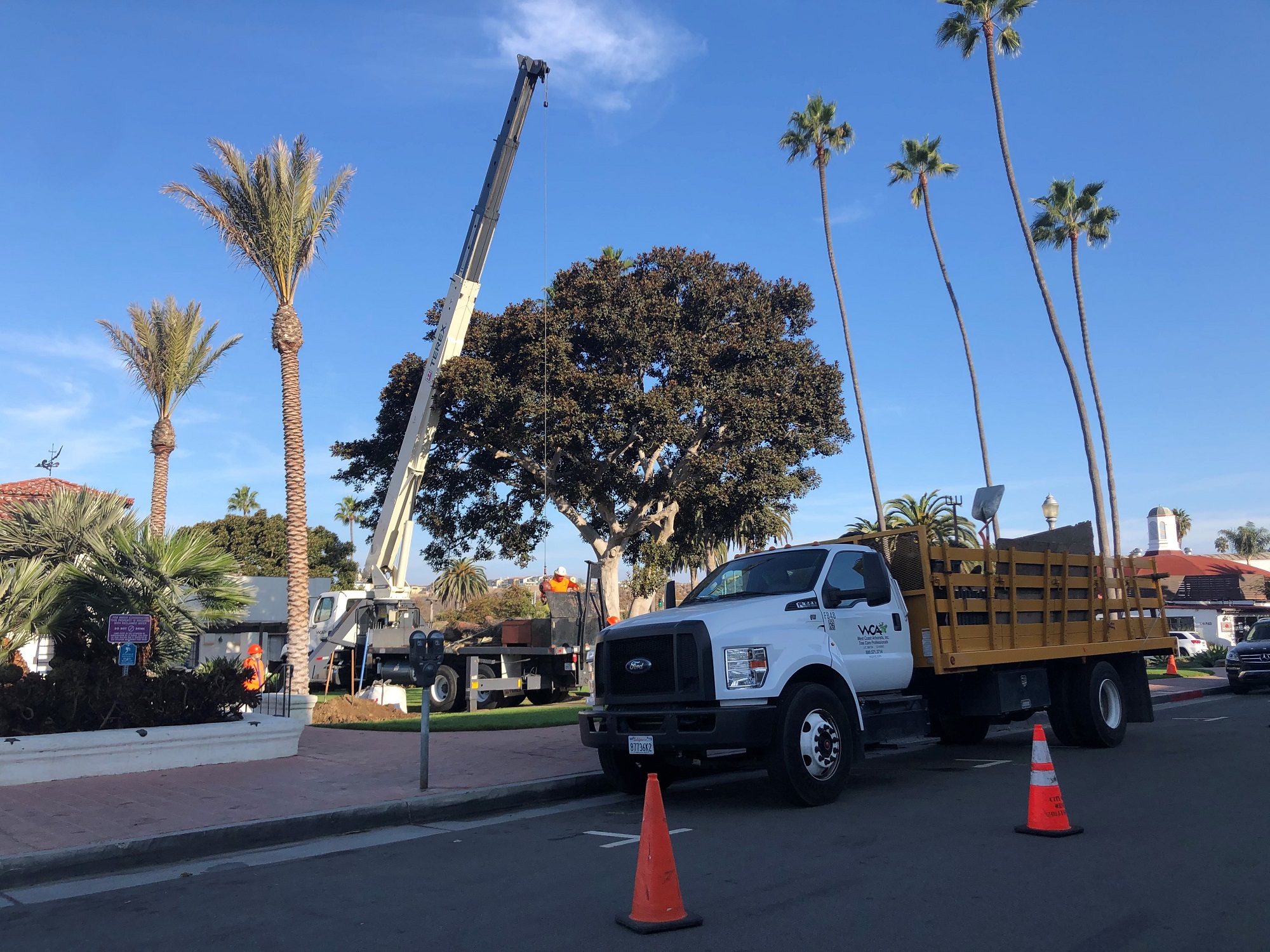 After months of leaving a long-term tree service agreement up in the air, the city council voted last week not to award the coveted contract to West Coast Arborists, which has been the top bidder throughout the city’s solicitation process this past year.

The 3-2 decision—with Mayor Kathy Ward and Councilmember Chris Duncan voting in favor of awarding the five-year contract to the Anaheim-based company, while Mayor Pro Tem Gene James, and Councilmembers Laura Ferguson and Steve Knoblock voted against it—not only leaves the city without a permanent contractor for tree services, it potentially puts it at risk of litigation.

“When you redo a bid this many times, deviating from the recommended course is risky,” City Attorney Scott Smith told the council during its March 16 meeting, addressing correspondence from an association of labor groups threatening to take legal action.

In three consecutive bid processes last year, the city ranked West Coast Arborists as the top contender, each time beating out Rod’s Tree Service—the San Clemente-based company that had provided services to the city for the past 40 years.

Twice before, the contract was brought to councilmembers with the recommendation of awarding it to WCA. They instead voted to reject all the bids and amend the solicitation process, first changing the potential contract from a three-year to a five-year deal, and then redrafting the policy related to the selection of contractors.

In early September, the four-person council considered the contract for the third time, but was divided, reaching an impasse with Ward and former Councilmember Chris Hamm voting against a motion supported by James and Ferguson to reject the bids again.

“We were disappointed by the City’s rejection of award of contract to WCA at last week’s regular City Council meeting,” WCA President Patrick Mahoney said in an email on Monday, March 22.

“This latest RFP was the City’s third attempt to hire a contractor for the City’s tree maintenance services. In each case, we were clearly the lowest, most responsible bidder as determined by City staff,” he continued. “We can’t understand why the City Council has rejected our bids despite being significantly lower in cost each time it bid.”

Smith in September had warned the council at that time of the “significant (legal) exposure” the city could face by not awarding WCA with the contract, noting that the company won the bid three times based on criteria related both to price and other subjective factors.

“There’s some pretty significant exposure here if we don’t do that. This is left to the council’s discretion, and we would defend any decision you made,” Smith had said, adding: “State law requires that awards of contracts be awarded and given competitively and given on competition and not on favoritism and past successes.”

James and Ferguson had previously praised Rod’s Tree Service for its philanthropic efforts within the community.

“Rod’s Tree Service has been a part of this community, and I’m just not going to be able to walk away from them,” James had said during the council’s Sept. 1 meeting.

According to Smith, the city has since received a letter from a trade association, the Construction Industry Force Account Council, threatening litigation over the council’s vote last September.

Citing Smith’s own comments, CIFAC stated in its Sept. 2 letter that “personal feelings, opinions, or decisions by Council members should not be a deciding factor during the awarding process.”

“CIFAC strongly objects to the City’s handling of the entire process regarding the bidding and awarding of the Annual Tree Maintenance Contract/Agreement,” wrote Patricia Rascon, the group’s southern regional compliance manager. She added, “Should the City’s response ignore the legal bidding requirements, CIFAC will pursue all additional options, which may include legal recourse.”

As of press time, neither Rascon nor Smith had responded to requests seeking comment.

Last week, James, who is currently serving as the city’s mayor pro tem, slammed the nonprofit, as well as WCA, over the threats of a lawsuit, claiming that “WCA and their minions have put us up against the wall.”

“I resent it,” James had said, before touching on Rod’s services to benefit San Clemente residents and organizations. “Who’s going to do all the great deeds Rod’s has done over the years? I’m disappointed with where we’re at.”

CIFAC represents several construction and trade industry labor unions, including LiUNA of which WCA is a member.

Mahoney said he’s proud the company is a member of the labor union, stating it’s good for his employees, as it provides benefits to them and their families. As to the relationship between LiUNA and CIFAC, he did not have a comment.

He further stressed to San Clemente Times that his company has no intention of suing the city and “never threatened litigation.”

“We never threatened litigation,” he said, adding: “We’re not threatening litigation. We’re hoping (councilmembers) do the right thing. We’re hoping that somebody, maybe at the next meeting, they change their mind for reconsideration.”

Asked whether he’s concerned about the potential for litigation following last week’s council vote, James said he’s “more concerned about protecting a San Clemente company that’s done great things for this community and been a great corporate citizen, and whose employees are San Clemente residents—their employees and ownership.”

Agreeing with James’ comments during the council meeting, Rick Rodriguez, one of the owners of Rod’s, said he too resented the threats of legal action.

“The city is already in the hole with litigation … we don’t want that for the city,” he said. “We think it’s kind of crazy that (the union group) would threaten litigation. We’re also members of this community, so it really hurts us.”

Matt Garcia, another owner of Rod’s Tree Service, said that the company never wanted the matter on the contract to get to where it is now.

About a year ago, the city initially put out a request for proposals for a three-year tree service contract for which both WCA and Rod’s submitted bids. Staff had recommended WCA get the contract, as it had submitted the lowest bid, but the council in April 2020 opted instead to reject the bids and put out a new RFP for a five-year agreement.

Both companies again submitted bids for the contract, with staff listing WCA as the winner based on having the lowest bid. Councilors voted last June to redraft the solicitation process, prompting staff to draw up the new policy when it comes to selecting contractors.

The new policy, approved by the council last July, allowed the city to consider other factors besides cost when it came to tree maintenance contracts. In the third round of bids, the city evaluated three bidders—WCA and Rod’s, as well as United Pacific Services —based on a 100-point system.

The evaluations, conducted by three city officials, were based on adequate knowledge of local conditions, experience of key project staff, work plan and approach, project experience and cost proposal, among others.

Mayor Ward last week agreed with James that the letter from the trade association was unnecessary. Touching on the mounting pressure from residents imploring the council to go with Rod’s, Ward argued against claims that “we’re trying not to support local businesses.”

“That’s absolutely not true,” she said before addressing the cost difference between WCA and the highest submitted bid. “I’m not allowed to pay taxpayer money, $344,000 more, over a five-year period than another contractor. I simply cannot do that for the same job.”

Addressing the support for local companies, Mahoney emphasized that WCA has operated in Orange County for the past 48 years and considers his business “local.”

“We do the county and the surrounding cities; we’ve been in the county for 48 years,” he said. “So, I think we’re very local. They act like we’re not the local guy; we’re doing everything in the local area there.”

He also noted that WCA contracts with municipalities, working with cities rather than selling services to citizens. Should issues arise on residential properties, the company, he said, will refer homeowners to businesses operating within the respective community.

“We’re not there to take (Rod’s) business away from him,” Mahoney stressed of the family-owned company here in San Clemente. “We’re there to take care of the city and leave all residential work to him or other locals.”

Despite no longer having a contract with the city, Rod’s, Rodriguez said, has been able to stay afloat, largely with the support of the community.

“We’re lucky that with the pandemic we still have work,” he said, adding, “The people who have reached out to us, they’ve been supportive; it’s been amazing. We are here, it’s still local and we’re still operating.”

Since September, the city has contracted with WCA for as-needed, emergency services under the city manager’s $25,000 spending limit. That limit, acting City Manager Erik Sund told the council, was coming up, as anything beyond $25,000 requires approval from the dais.

Following the council’s vote to reject the award, it approved another $25,000 to fund as-needed emergency tree services for the remainder of the fiscal year.