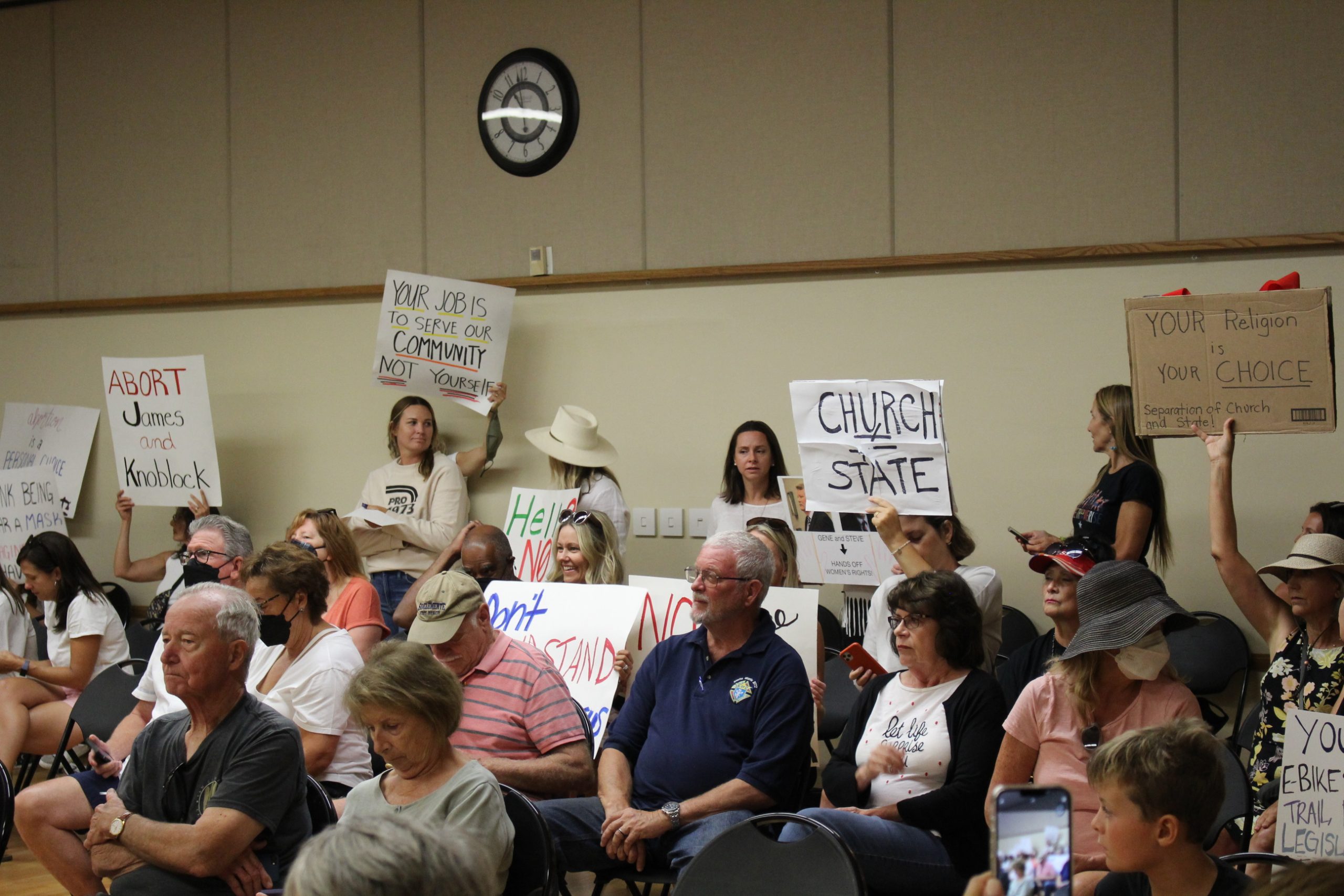 Concerned residents, many clad in pink, flooded the San Clemente Community Center on Saturday morning, Aug. 6, as the City Council held a special meeting to determine whether to discuss a proposed “pro-life” resolution at the Aug. 16 regular meeting.

The resolution in question—of which a draft that circulated this week would have designated the city as a “Sanctuary for Life,” condemned abortion and stood the City Council against any abortion clinics in the city if passed—was put forth by Councilmember Steve Knoblock and seconded for discussion by Mayor Gene James during the previous regular meeting on July 19.

After an impassioned public comments section, of which 48 speakers signed up to speak for a maximum of three minutes each, the council voted, 3-1, to remove the resolution from the next meeting’s agenda.

James, Mayor Pro Tem Chris Duncan and Councilmember Kathy Ward voted in favor of removal, with Knoblock remaining as the lone vote against. Councilmember Laura Ferguson was unable to attend the meeting.

Knoblock held that it was appropriate for the council to weigh in on the matter of abortion legislation, as he called the group a “political subdivision of the state” with the right to speak on public policy issues.

“That’s my reason for (agendizing the resolution), to protect human life,” he said. “All children are human. They deserve to be protected, and I think that’s vitally important.”

Knoblock also called out James’ comments to Los Angeles Times, in which the mayor stated the resolution was tantamount to a “Taliban tribunal.”

“(The comment) really surprised me, because—let me think about that—the Taliban kills innocent human beings, abortion kills human beings,” Knoblock said. “So, to put them together is interesting. Maybe the author of that comment can explain it someday.”

He finished by questioning whether abortions were a health issue, calling them the antithesis of mothers’ health.

Ward said that as locally elected officials, councilmembers are responsible to put their energy toward the operations and development of the city.

“Beyond that, anything that is above is not in our purview,” she said.

Ward added that by agendizing such a resolution, the action was unethical and did not respect what the position’s role should be within the state government. Additionally, by weighing in on state law, the lines between state and local control become blurred, according to Ward.

“I think why everyone is so concerned is not the issue itself, of whether you’re pro-choice or pro-life,” she said. “It’s because you’re hearing this from your local government, and you’re not accustomed to that.”

Duncan thanked the audience for attending, both those in the main auditorium and the people who had to be separated into an overflow room. He added that by calling a special meeting within a day of it being scheduled to occur, the practical effect was a disservice and cut off the participation of all who may have wanted to attend but couldn’t.

Speaking to the resolution as a husband and father of two daughters, Duncan said it never should have been agendized and that women’s rights to control their bodies are “sacrosanct.”

“I don’t actually think this is a divisive issue,” he added. “The overwhelming majority of our country, our region, and our city believe that women, not the government, have the right to choose.”

Duncan called the resolution government overreach, reminiscent of his previous public comments on the matter to media and in a personal statement posted to Twitter.

He said he was anxious to hear public comments, and that if the resolution were to be officially struck down Saturday, it would mean the comments at the meeting and through emails would have been heard and that people’s rights were protected.

James said he regretted and apologized for seconding Knoblock’s initial motion, and that it was unfortunate that the drafted resolution leaked despite his opposition to it. James also acknowledged he made the reference to the Taliban in speaking with LA Times.

James said the resolution represented overreach, and that the medical references were inaccurate and should not have been included.

“All the references to God—there was a word ‘condemn’ in there—were inappropriate and simply should not have been in a resolution from the city of San Clemente,” he added.

In the draft of the resolution, the final paragraph mentioned “God” five times, including that the City Council would stand on the resolution “to honor God.”

After turning over the agenda item to public comments, many of the speakers said the resolution had tainted the city’s reputation, called the resolution symbolic and unenforceable and called for the council to focus on supporting local businesses and students and other issues within the council’s purview.

Kortney Morrow, a San Clemente resident and mother of three children, called the resolution a “complete disgrace” and expressed her “total disappointment” in the city leadership.

Despite the likelihood that the resolution would not move on, she said Knoblock and James were not excused from the political theater they created and the embarrassment they had brought to the city.

“This behavior will not be tolerated,” Morrow said.

Maia Meunier said she was disgusted by the proposed “attack on (her) bodily autonomy,” and that the resolution was full of contradictions, including the mention of “liberty” while saying the concept meant the freedom from an authority imposing oppressive restrictions.

Meunier cited the resolution’s language directed toward Planned Parenthood and referenced how the organization’s clinics helped her in a time of need.

“All you care about is taking away health care available to women,” she said, specifically speaking to Knoblock.

Trudy Podobas, a 25-year San Clemente resident, chastised Knoblock by claiming he was imposing his religious views on the women of the city. She also said it was the job of elected officials to maintain a safe and healthy atmosphere in which to live, work, and play, referring to the city’s mission statement.

“Maybe instead of using city resources on dictating personal decisions of women here in San Clemente, you should be ensuring that any one of us women doesn’t get killed by a motorized bicycle,” Podobas said.

While there were many more that spoke in opposition to the resolution, there were several members of the public who came to the meeting in support of the resolution and Knoblock. A handful of speakers applauded Knoblock for his “courage” for speaking up for his personal beliefs, with another speaker deeming him “a hero.”

Speaking to the motion to dismiss the resolution from the agenda, Knoblock denied that there was any previous collusion by James to put the item on the council’s agenda, in reference to claims made earlier in the meeting. He said that when he made his initial motion at the July 19 meeting, no other councilmember had a copy of the resolution or advance notice.

He also affirmed his stance that the issue of abortion needed to be vetted and addressed by the council.

Before the meeting began Saturday morning, Rep. Mike Levin tweeted that the council should protect the rights of the city’s residents to make their own reproductive health care decisions and not remove them.

“I’m hopeful they decide to stand for individual rights at this morning’s special meeting,” Levin wrote.

“I am proud to stand with the hundreds of San Clemente residents who showed up with less than 24 hours’ notice to speak out and demand their council refocus on the real issues facing Orange County and keep government out of personal medical decisions,” her statement read.