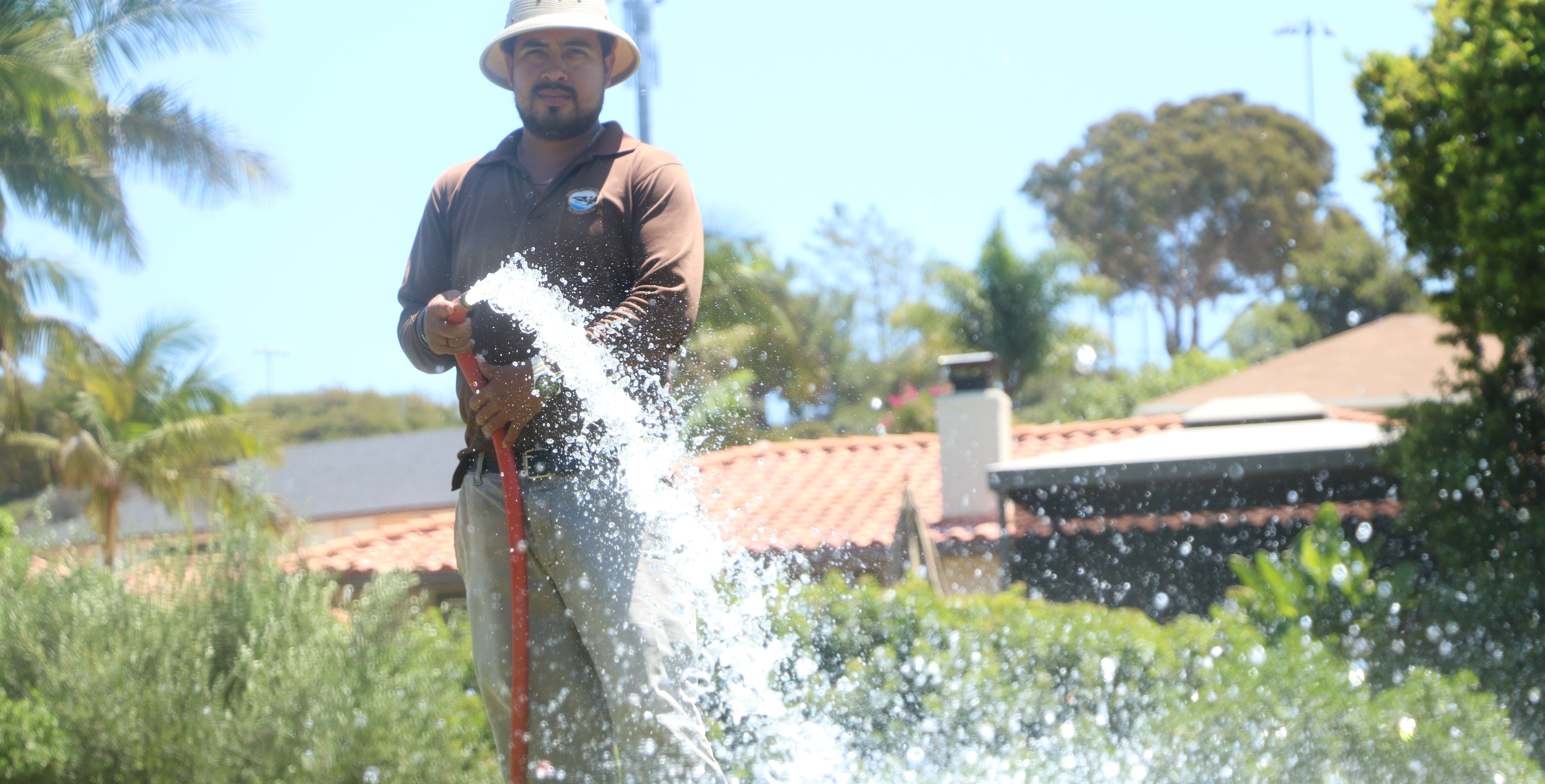 The storms that rolled through San Clemente the weekend of July 18 brought roughly one and a half inches of rain in a 24-hour span, which is always a welcome sign for golf courses in the area.

After that much rain in one day, Shorecliffs Golf Club general manager Joe Leicht would normally require golfers to stay on the cart paths and off the fairways for the following two to three days, allowing the turf to soak up as much moisture as possible and retain it. But this summer, and year, has been anything but normal in terms of weather.

By Monday morning, hours after the storm broke on Sunday, July 19, the fairways and greens at the local course had absorbed almost all of the water and conditions were normal, according to Leicht. It was almost like the rain never happened.

“We were able to go 90-degree rule (with carts) because the ground just ate that water up,” Leicht said. “It was almost like a switch from Sunday to Monday.”

Golf courses that rely on potable water are thirsty and operators like Leicht, and his course maintenance crew, along with their peers statewide, are seeing the effects of the four-year-long drought that has struck California. For courses like Shorecliffs Golf Club, which currently relies on potable water, the pipes have been tightening due to restrictions on potential over-users.

In April, Gov. Jerry Brown enacted a law that all residents cut potable water usage by 25 percent. For a sizeable portion of the golf industry in California that uses potable water to keep the grass green, that has put them squarely in the government’s crosshairs.

Brown directed the State Water Resources Control Board to “impose restrictions to require that commercial, industrial and institutional properties, such as campuses, golf courses and cemeteries, immediately implement water efficiency measures to reduce potable water usage in an amount consistent with the reduction targets mandated.”

Courses running on reclaimed water are not mandated to cut usage. San Clemente Municipal Golf Course, Bella Collina Towne & Golf Club and Talega Golf Club all run on reclaimed water, which is currently priced at $936.65 per acre foot they use. The city’s rates are expected to change on Aug. 1 and future rates were not available at press time. There was no price difference between potable and reclaimed water under the old rate system.

Under the guidance of course superintendent Jose Pelayo, Shorecliffs Golf Club has been decreasing its water usage considerably since 2009 while maintaining the quality of the course, according to Leicht. The shining light at the end of the tunnel for the course has been the expansion of the city’s recycled water plant, which opened on Sept. 25, 2014. Shorecliffs Golf Club has been waiting to tap into the reclaimed water pipeline and plans to be fully converted to recycled water by the end of August, Leicht said.

In the time spent waiting for the pipeline, Pelayo and his grounds crew have learned to get creative with their landscaping and agricultural duties. Roughly 20 acres of turf has been removed since 2009 and replaced with biodegradable mulch, which can be seen primarily around tee boxes and areas that are not considered in play to golfers. Watering days have been limited to two days instead of four and the greens are now being hand-watered in order to precisely deliver water to stressed areas. A combination of aerating the turf and applying a wetting agent, which seeps into the deeper layers of the soil in order to retain moisture, has kept Shorecliffs green. In some areas, irrigation systems have been removed entirely. The condition of the course’s poa annua greens remains “perfect,” according to Leicht.

There is also the amount of water being used on the course, which has dropped off dramatically since 2014. According to Pelayo, Shorecliffs Golf Club used 8,000 units (almost 6 million gallons) of water per month last year compared to the 5,200 units they are averaging per month in 2015, a decrease of 35 percent.

Last year the course spent $270,000 on water. Despite the impending shift to reclaimed water in August, Leicht is not anticipating a large increase in savings down the road. Certain chemicals, like calcium and gypsum, will need to be purchased and added to the course in order to offset the lower-quality water’s impact on the turf.

“The savings aren’t going to be all that significant in the long run … but long-term, the nice thing is, we won’t be under those restrictions,” Leicht said. “We’ll be able to make sure we can water when and if we need it, and at the same time we’ll be more responsible stewards.”

In Dana Point, Monarch Beach Golf Links has been leading a charge of environmentally sensitive golf course maintenance practices. In 2011, the course was certified by the Audubon Cooperative Sanctuary Program for golf courses, which issues guidelines and practices for member courses to follow in order to limit the impact on the surrounding environment.

Monarch Beach Golf Links has been running on reclaimed water for 10 years, according to general manager Eric Lohman, so there has not been usage restrictions levied on it. But that has not stopped the popular resort course from taking action in regard to water consumption.

Aside from keeping watchful eyes on sprinkler heads and replacing bathrooms with waterless urinals, Monarch Beach uses advanced sensor technology to avoid overwatering. Sensors are placed in the greens that provide real-time evaporation rates to the course superintendent, highlighting when and when not to water.

Monarch Beach also uses paspalum, a drought tolerant turf, across the grounds. Lohman and his staff said the paspalum responds best to reclaimed water and is a better alternative to other strains of grass, which could require more watering in order to stay alive and lush.

Although they are not mandated to do so, Monarch Beach Golf Links decided to cut back on water usage in 2015. Lohman estimates the course has reduced consumption by roughly 10 percent compared to last year and is down 15 to 20 percent from its all-time high several years ago.

“There is an effort in golf that whether you have reclaimed (water) or don’t have reclaimed … at the end of the day we understand that our neighbors are having to make sacrifices, our hotel partners are having to make sacrifices,” Lohman said. “So we just want to make sure that we’re definitely doing everything in our power, whether we’re required to or not, to at least lead by example … We have taken it upon ourselves to do that.”

Some numbers and statistics associated with the California golf course industry’s water usage.

*Numbers based on The California Golf Economy: Economic and Environmental Impact Summary, a 2011 report compiled for Golf 20/20 by SRI International, an independent, nonprofit research institute.