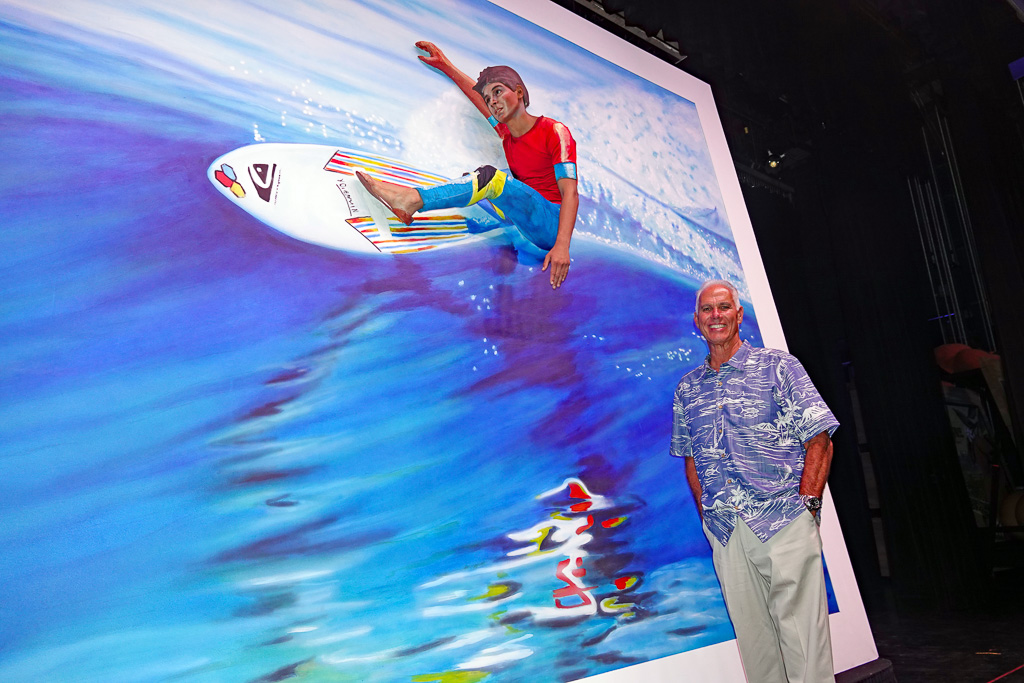 A ‘Cut’ Above: San Clemente Artist’s Painting Prominently Featured at Pageant of the Masters

If you have never seen the Laguna Beach Pageant of the Masters, this would be a good summer to experience the spectacle, whether you are a fan of art, surfing, music, local history or Southern California beach culture.

The magic happens when cast members step into a painted backdrop. They assume a position, freeze and become one with the picture.

The centerpiece of this year’s show is “Cutting Glass,” a 1991 acrylic-on-canvas painting by San Clemente artist Gary Prettyman. It depicts an 18-year-old Kelly Slater riding a wave at Lower Trestles during the 1990 Body Glove Surf Bout.

Slater, now 46, scored his first professional victory there and went on to capture an unprecedented 11 professional world surfing titles.

Prettyman’s painting holds a distinction among local artists in the Pageant of the Masters in that it has appeared three different years since 1992—two of those years as centerpiece of the show.

This year, as in 1992, the image of Slater was selected to be the pageant’s souvenir poster, T-shirt and program cover. It embodies 2018’s pageant theme, “Under the Sun.”

“It was a perfect fit,” said Diane Challis Davy, the pageant’s director. “Gary’s painting really captures the essence of the sport in the 1990s, and of course, he certainly was smart to recognize the impact of international surfing champ Kelly Slater. The audience really loves this picture.”

Prettyman, who grew up surfing the beaches of San Diego County, has lived in San Clemente with wife Nina since 1976. In 1991, he was a Laguna Beach Festival of Arts exhibitor, with “Cutting Glass” on display in his booth. The painting’s striking textures and colors caught the eye of pageant directors as they scouted living-picture possibilities for the 1992 pageant.

“My reaction to being in the pageant was surprise, disbelief, joy and a deep sense of accomplishment,” Prettyman said.

It happened again in 2003. “Cutting Glass” wasn’t the pageant’s centerpiece that year, but the 2003 show was special to the artist because Kelly Slater attended it and went backstage with Prettyman to pose for photographs with him and the living picture.

This year is special, too. The surf painting’s 2018 resurgence and soaring popularity with pageant-goers has inspired Prettyman to pick up his brushes again, after a sequence of health issues sidelined his art career in 2010.

He almost never even got that far.

In 1994, two years after “Cutting Glass” had starred at the pageant, a seemingly insignificant cut or scratch on Prettyman’s left arm nearly killed him. He never knew what caused the arm to swell up. He battled fevers, his blood pressure plummeted and his internal organs went haywire, leading to kidney failure. Blisters on his arms, legs and back left him resembling a burn victim.

The diagnosis was necrotizing fasciitis, or flesh-eating bacteria.

“I was in ICU for six weeks,” he said.
Recuperation from the near-death experience was a year-long ordeal. Eventually Prettyman resumed painting while also taking a day job at Costco in 1998.

His art career took another hit in 2010 when Prettyman needed ankle-replacement surgery, a belated consequence of the episode with flesh-eating bacteria. After the ankle surgery came a fivefold bam-bam succession of other serious medical challenges.

“I had too many things distracting me from art,” Prettyman said.

This is how a Pageant of the Masters cast member looks while being readied to appear in the show. Pictured is Brian Jacoby, who portrayed pro surfer Kelly Slater in a living picture of artist Gary Prettyman’s acrylic painting ‘Cutting Glass’ in 1992. Photo: Fred Swegles

Pageant-goers pose for pictures before entering the Laguna Beach Festival of Arts grounds, where they can visit artists’ booths, dine, sip wine or purchase souvenirs prior to the 8:30 p.m. Pageant of the Masters show. The festival is a summer art show, open daily, which runs alongside the nightly pageant. Photo: Fred Swegles

Newly retired from Costco since July 5, and feeling totally healthy, Prettyman is amped to get back into painting after viewing “Under the Sun” on July 20. The crowd’s response to the show and his work was enthusiastic.

“It was great,” he said of the show. “It was informative. It was fun. It was historical. It was educational. And musical. It was one not to miss.”

His own resurgence may begin with a portrait he’d like to do of iconic Hawaiian surfer Ben Aipa.

Aipa and Prettyman have been friends since Prettyman was a teenager riding Aipa surfboards. Prettyman still has his old Aipa boards, unwilling to part with them. For many years, when Aipa coached Hawaii’s scholastic surfers and brought the team to California for the NSSA Nationals at Trestles, the team would stay at the Prettymans’ home. It was Aipa who introduced Prettyman to Slater at the 1990 Body Glove Surf Bout.

Prettyman recommends the 2018 pageant to anyone who can identify with “Under the Sun,” a creative spectacle choreographed to be inspiring, informative and fun, including some colorful live-action surprises.

The 68-year-old artist sounded like a kid this week, describing the thrill of seeing his art presented alongside works by his heroes Claude Monet, Paul Gauguin, John Singer Sargent and Leonardo da Vinci.

“That was beyond my wildest dreams,” Prettyman said. “I mean, I’m (saying), ‘Gary, your art is being shown with da Vinci? Get out of here!’”

About the Laguna Beach pageant

First year: 1933
2018 show: 27 living pictures illustrate a lively narrative about local history, pageant history, local artists and surf culture; after intermission, 12 more artworks showcase artistic masters, concluding with “The Last Supper”
A few highlights: Images from California’s rancho period, historic Serra Chapel at Mission San Juan Capistrano, the golden age of colorful California orange crates, scenes from Laguna Beach’s early art colony, the poster from “The Endless Summer” surf movie, and the bronze sculpture of a surfer that you pass while driving PCH through Huntington Beach
Making it happen: Nearly 500 volunteers include cast members, makeup artists and more, hold casting calls in January, rehearsals beginning in February
Geographic: More than 80 percent of pageant volunteers are from outside of Laguna Beach, mostly from around Orange County but some as far away as Murrieta and Sherman Oaks
Casts: There are two complete casts; each performs for seven evenings, alternating weeks
Narration: The pageant’s dramatic script isn’t recorded; it’s live, every evening
Music: The pageant’s own orchestra performs original compositions for the show, plus popular tunes
This year’s lineup: Song list includes six Beach Boys songs, plus the twangy tune “Wipeout” and a San Clemente-born anthem, “The Endless Summer”
Vocals: All of them, from “Warmth of the Sun” to “Surfin’ Safari,” are sung live at the show

Performing in the Pageant
At 15, San Clemente’s Joseph Marquez is a veteran cast member, spanning five seasons at the pageant.
He appeared in a Vincent Van Gogh painting, “Wood Gatherers in the Snow.” He portrayed a middle-aged man in a scene re-created from the movie “Ferris Bueller’s Day Off.” He was a construction worker in a Norman Rockwell painting. He was part of an indigenous tribe during a Buffalo Bill’s Wild West Show live-action segment.
At this year’s pageant, he is Kelly Slater, pro surfer.

How do they do it?

The pageant’s living picture of Kelly Slater on a wave is one of those “how is this even possible?” technical challenges.

“I said, ‘You could never do that!’” artist Gary Prettyman said, describing his reaction when told his painting was selected for the 1992 pageant. “They go, ‘we’re doing it … we can handle this!’

Here’s how: “They cut a hole in the wooden backdrop,” Prettyman said. “His back leg goes through there, and there’s a little seat where he’s sitting, halfway in, and the front leg is on a pad under his foot, to keep it in position. His back leg is counter-balancing, so he doesn’t fall forward. He’s sitting on the thing, but you can’t see it. It’s very creative how they figured that out. I couldn’t believe it.”