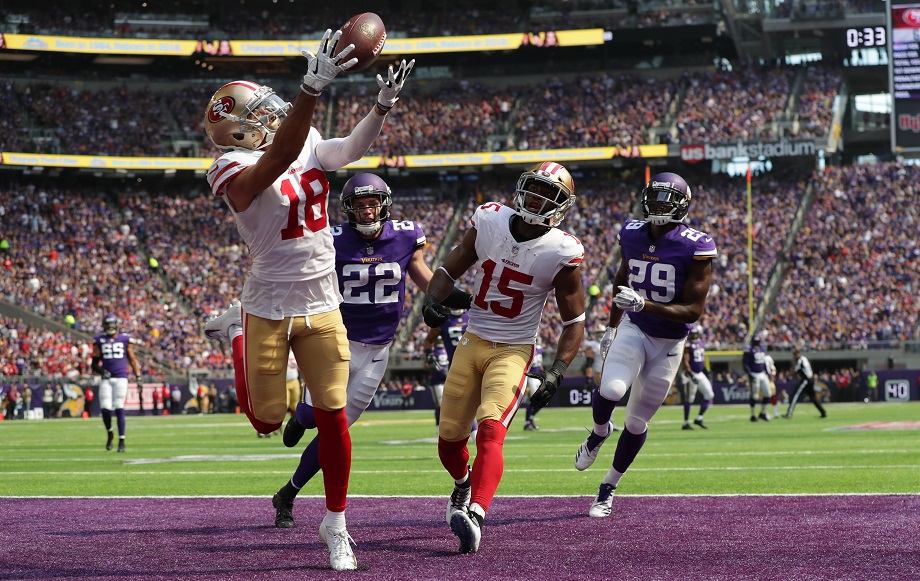 Dante Pettis, San Clemente native and the first JSerra player selected in the NFL Draft, also made waves in his opener with the San Francisco 49ers in Minnesota on Sunday.

With the 49ers trailing, 24-6, late in the third quarter, Pettis provided a spark.

On a second-and-15, quarterback Jimmy Garoppolo spun to his left out of a collapsing pocket and hurled the ball to the back left of the end zone. Pettis, who started as the first receiver on the right of the formation, darted diagonally to the left and got full extension on his arms to pull in his first NFL reception and first NFL touchdown, a 22-yarder.

Pettis, a second-round pick in the 2018 NFL Draft, was targeted five times for two receptions for 61 yards. With his blue-tinged hair peeking out the back of his helmet, Pettis played the second most snaps of any 49ers receiver, 48, in a 24-16 loss to the Vikings.

Pettis and the 49ers will look to bounce back on Sunday, Sept. 16 at 4:05 p.m. in their home opener at Levi’s Stadium in Santa Clara against the Detroit Lions.