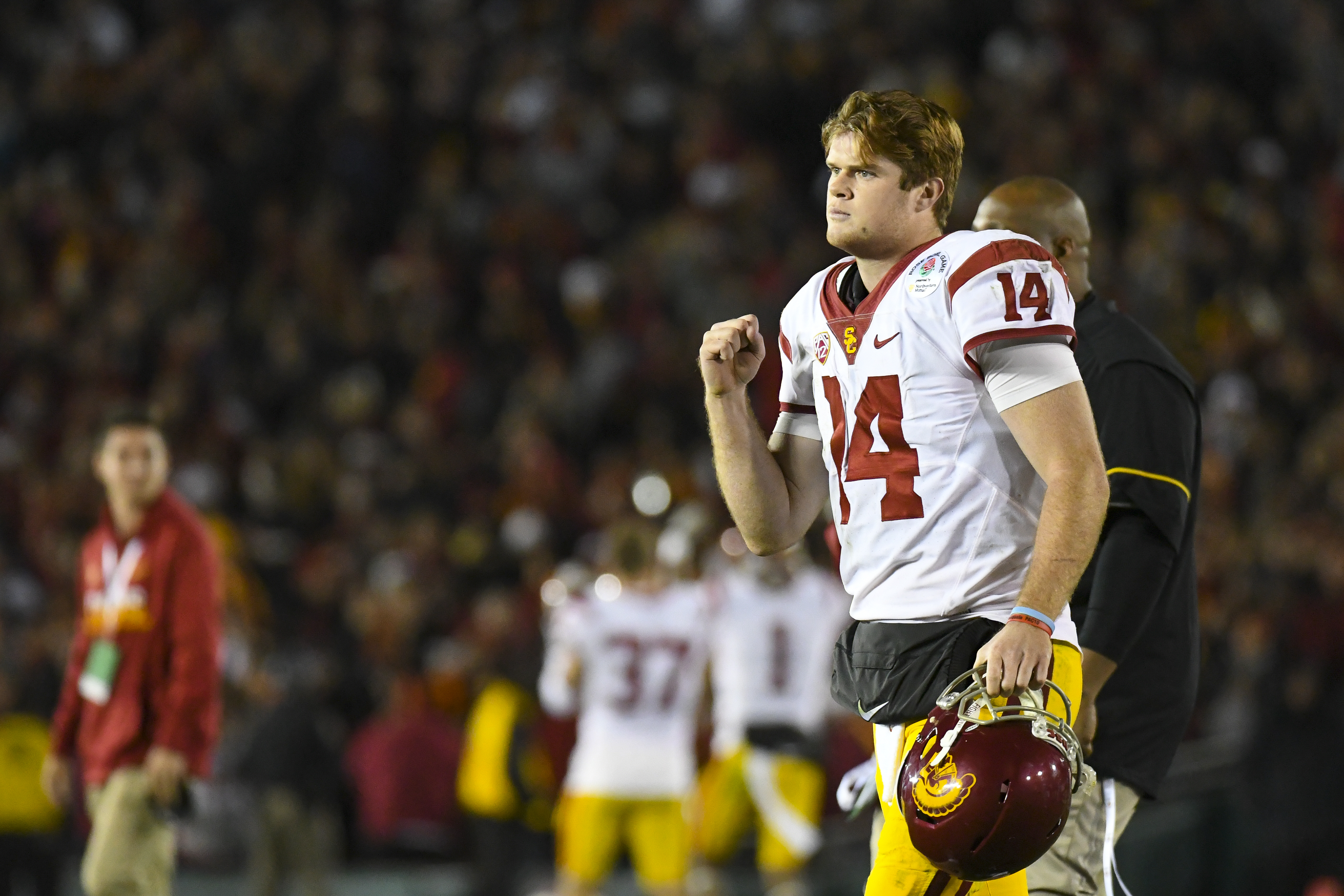 Less than 24 hours after playing the role of hero in front of 95,000 screaming fans in The Granddaddy of Them All, Sam Darnold was back in his hometown 70 miles away, relaxing with his family watching television.

For Darnold, the USC football team’s redshirt freshman quarterback, the moments that made up one of the wildest Rose Bowl Games ever were still floating around in his head. He was still processing the fact his team was able to rally from a 14-point deficit in the fourth quarter to seal a 52-49 victory over Penn State, triumphantly ending a season that started out on rocky footing.

“I don’t think it’s truly hit me yet,” Darnold said from the comforts of his parent’s San Clemente home on Tuesday.

Darnold, the newly minted king of Los Angeles football, was decompressing the day after being named the Rose Bowl Game’s offensive MVP by watching the television broadcast of the game for the first time with his mom, dad and sister.

You can bet the game will stay on the Darnold family DVR for a while.

Darnold dazzled a national audience in a shootout to the finish with the Nittany Lions. He threw a Rose Bowl record five touchdown passes and accounted for a record 474 total yards of offense, surpassing Vince Young’s Rose Bowl performance for Texas against USC in 2006.

He made throw after throw, and when his team needed him most, Darnold delivered.

After trimming the Penn State lead to a touchdown late in the fourth, Darnold drove the Trojans 80 yards downfield in 33 seconds. Darnold ended the drive by threading a bullet of a throw 27 yards through two defenders to receiver Deontay Burnett in the end zone. Tie game at 49-49.

ESPN commentator Kirk Herbstreit admired the throw for several minutes after it was made, and the circumstances behind the play made it even more impressive. Burnett was supposed to run a short-yardage route, but he decided to improvise and ran a deeper one toward the end zone. Darnold quickly anticipated what his receiver was doing, stepped up and delivered a highlight-reel ball that kept USC in the game.

“I just kind of knew what (Burnett) was thinking when he was running to open grass, and I just had to put the ball there,” Darnold said of the play.

Darnold could have flinched under the bright lights that night, but he kept his cool. For those who watched him rise to the occasion time after time on the field or on the court at San Clemente High School, it shouldn’t come as a surprise. His poise and cool under pressure has always stood out as a defining characteristic.

“I think a lot of it has to do with the way I was raised,” Darnold said. “Being from San Clemente, it’s not really too uppity of a town, whereas in L.A., everything is fast-paced. In San Clemente, you can come here and relax.”

USC could have folded in the fourth quarter multiple times against Penn State, but they never did. Darnold credited the team’s determination in the game to a trust factor that has built up between the Trojans over the season. This USC team sure went through a lot, and it was the challenges that brought them closer together, Darnold said.

The first obstacle was a blowout loss to Alabama in the season opener. Then a humbling loss to Stanford followed. USC was sitting at 1-2 on the season with a matchup against Utah on the horizon and groans from the fan base regarding coach Clay Helton swarmed. That’s when Helton shook things up. He decided to put Darnold in the starter’s role, replacing redshirt junior Max Browne.

USC went 9-1 down the stretch, picking up wins over then-No. 4 Washington and rival UCLA, and ended the season as the victor in an instant classic in Pasadena.

“We did learn valuable lessons going through that rough four-game stretch. We learned from it and we battled adversity and we battled it in many games,” Darnold said. “Things like that come full circle and it’s interesting because you get to see that all pay off and come to fruition at the end of the year in big games like the Rose Bowl.”