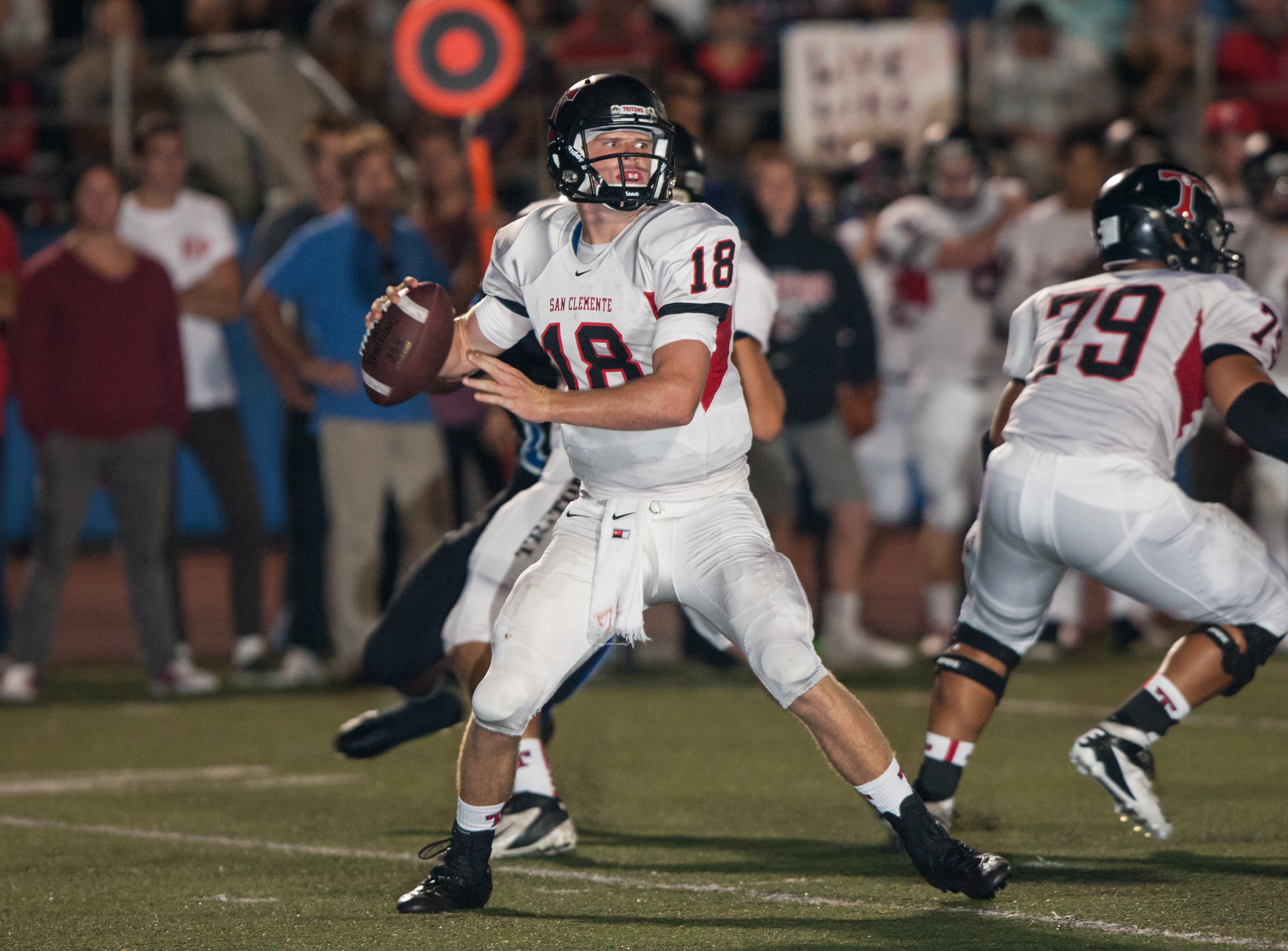 Darnold’s Road from San Clemente to the NFL Draft

Last Wednesday, Jan. 3, San Clemente alum Sam Darnold announced he would forego his final two years of college eligibility at the University of Southern California and declare for the NFL Draft.

“After talking to my immediate family, very close friends and many people who have helped me throughout my life, I have made the decision to declare for the 2018 NFL Draft,” Darnold said in a social media video.

The former Triton quarterback has always stayed true to his hometown roots and called back to that by pointing out a few San Clemente coaches.

“I want to thank coach (Jaime) Ortiz, coach (Troy) Kopp, coach (Marc) Popovich and everybody involved in San Clemente High School and its football program who tirelessly taught me to work hard and strive for what I want.”

It’s the fulfillment of a dream for Darnold, but his success is just as gratifying for each of those coaches who now count themselves among Darnold’s biggest fans.

“It’s something that he’s wanted ever since he was a little kid—to play at USC and in the NFL,” Triton football coach Jaime Ortiz said. “Knowing him since then, one of the best experiences as coaches is kids living out their dreams, succeeding in college and doing great things in life. This is the next step in his journey.”

Ortiz has had a connection with Sam and the Darnolds since Sam was in third grade.

“His mom was my master teacher at Shorecliffs Middle School,” Ortiz said. “He was an urban legend early on as a kid.”

When Darnold got to San Clemente High, he excelled as a freshman and performed well at other positions as a sophomore. Late in his second season, an injury forced Darnold into duty at quarterback and he found his calling.

“He has that it factor,” Ortiz said. “It’s something you can’t replicate. Things slow down for him.”

Darnold led the Tritons to a comeback win over Tesoro throwing a touchdown with about a minute left and converting a two-point conversion with a bootleg throw.

“He’s so instinctive,” San Clemente offensive coordinator Troy Kopp said. “He can turn nothing into something. In situations where we were down, he was very poised and able to do it.”

Darnold had earned the starting job for just junior season and pushed San Clemente to a 2-0 start. Then in the third game of the season, Darnold took on a season-ending foot injury, but even with the injury, he showed his ability and toughness.

“He got hurt in the second quarter,” Kopp said, “and went out in the following series. We were down by a touchdown. He was limping around the field, but scrambling and throwing to his left, he threw a touchdown to tie the game.”

Then came his senior football season where the legend of Sam Darnold truly took off.

Darnold threw for nearly 3,000 yards and 39 touchdowns in 2014 while rushing for 785 yards and 13 touchdowns to lead San Clemente to a 12-2 record and the CIF-SS Southwest Division final.

His performance earned him several player of the year awards and skyrocketed his stock as a college recruit. But as Darnold said in his video, USC’s offer was taking a chance as Darnold had so little football game tape because of his junior-season injury.

Darnold was a two-time league MVP for the Triton basketball team and was named to the school’s 50th anniversary team while he was still playing.

“His athleticism was special,” San Clemente coach Marc Popovich said. “People say that the skills don’t necessarily translate (from basketball to football), but he showed his skill to find guys while moving around and keeping his head up while making plays.”

Another skill that translated to football and then onto USC and presumably onto every NFL team’s draft sheet is his intangible leadership ability.

“Sam was not necessarily the biggest rah-rah guy,” Popovich said, “but he knows what everybody on his team needs. We never had a bad practice with him involved. He made sure everyone’s level was high.”

Darnold then signed on with USC and the rest is history. He led the Trojans to a dramatic Rose Bowl victory as a redshirt freshman and broke school records as a sophomore as USC won the Pac-12 title.

Now, Darnold is projected as one of the top picks in the NFL Draft on April 27. No matter where he goes as a professional, he’ll never be too far from his hometown.

“San Clemente is a special place,” Ortiz said. “It’s a tight knit community. When Sam comes back from LA and the hustle and bustle and goes down to the beach or shoots hoops, it’s a little break from him.”