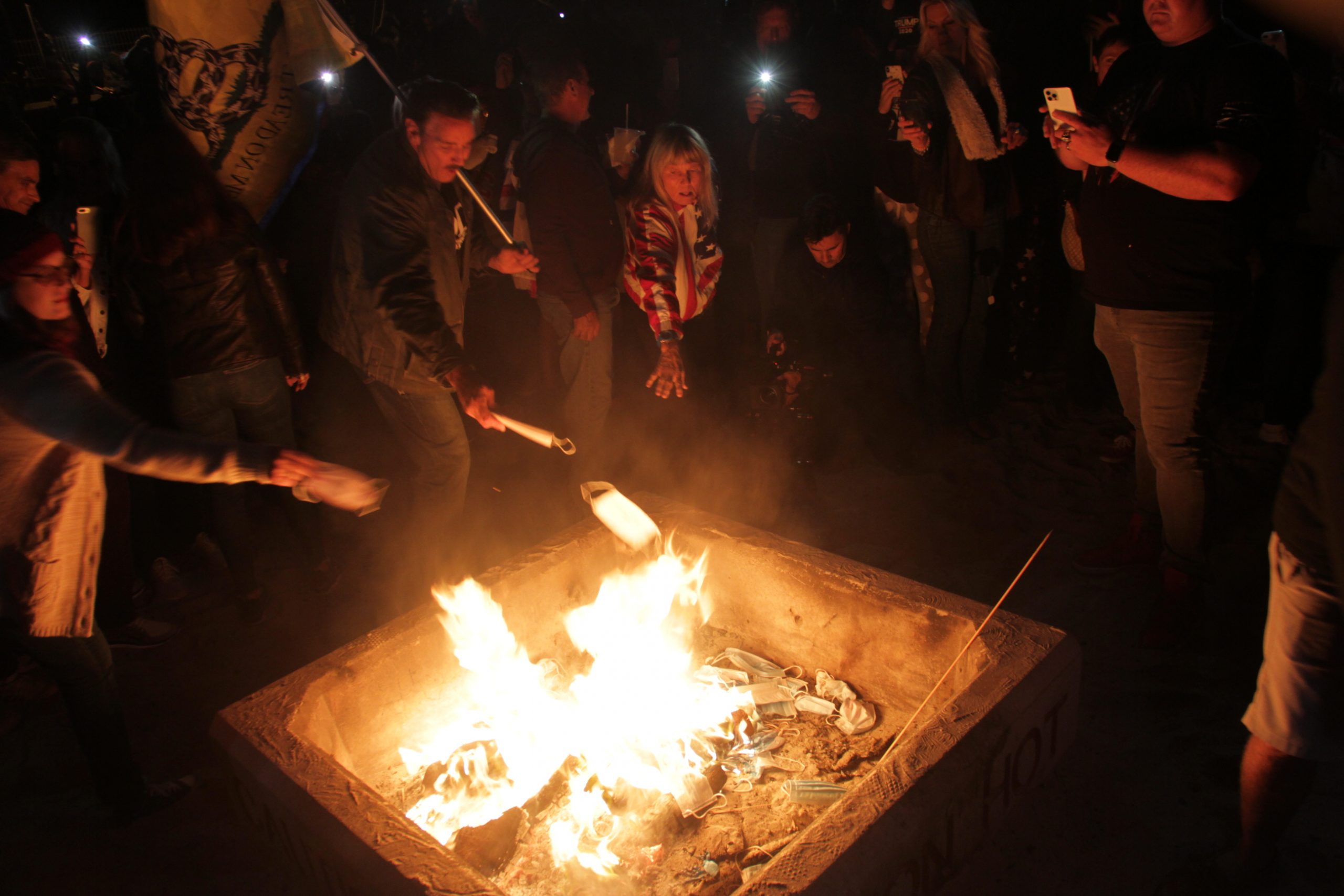 As the clock struck 10 p.m. on Saturday, Nov. 21, hundreds enthusiastically threw face masks into a firepit on the beach near the San Clemente Pier, sending a sharp rebuke to Gov. Gavin Newsom and his limited curfew imposed on counties struggling to get a handle on the latest surge in coronavirus cases.

Led by San Clemente resident Alan Hostetter and his American Phoenix Project, Saturday’s demonstration was advertised as “a clear act of defiance” that coincided with the first night of the state’s Limited Stay at Home order.

“This mask burning we’re about to do is the (Boston) Tea Party of 2020,” Hostetter said, eliciting cheers from the crowd of mask-less demonstrators, many of whom, donning Make America Great Again caps, waved American and Trump 2020 flags.

“We’re about to make a statement, a powerful statement that is being made up and down the state of California, and it’s not going to end there,” Hostetter added, continuing to make disparaging remarks toward the governor, even going as far as suggesting an overthrow of the Newsom administration.

The limited curfew, announced late last week on counties within the purple “widespread” risk tier, placed a moratorium on all non-essential work, movement and gatherings between the hours of 10 p.m. and 5 a.m. for the next month.

The order comes as COVID-19 infections and hospitalizations are on the rise in California and the rest of the nation. It also followed the state’s decision to drop several counties, including Orange County, back into the purple tier—the most restrictive level on its color-coded coronavirus monitoring system.

While there was a presence from the Orange County Sheriff’s Department, like in previous rallies and protests throughout the year, the gathering and mask burning demonstration went off without intervention from law enforcement.

Sheriff Don Barnes last Thursday, Nov. 19, issued a statement in response to the governor’s Limited Stay at Home order, explaining that the department wouldn’t enforce the curfew, and instead maintain its position of taking “an education-first approach with regard to the public health orders.”

Barnes had said that while OCSD is “assessing the action by the Governor,” deputy sheriffs “will not be responding to requests for face-coverings or social gatherings-only enforcement,” because they need to be available for emergency calls.

“Gavin Newsom is a criminal,” Hostetter said while addressing the crowd. “We are going to show him tonight that we are no longer listening to him.”

Daryl Wilkinson,a former Dana Point resident currently living in Anaheim who attended the rally on Saturday, acknowledged the severity of the pandemic, but said he believes the restrictions are a step too far.

“We want to stand up for our God-given Constitutional rights,” he said, adding: “It’s understandable that, yes, there is an epidemic, a situation with the pandemic, but our present government has no right to impede on everyone’s rights to assemble while they’re ignoring the data on the infection rate and the fatality rate of this pandemic.”

The county on Monday, Nov. 23, reached a new milestone in total cases, surpassing more than 71,110 cumulatively to date, as 1,422 new positive cases were reported to the health office. More than 1,550 county residents have died from the disease, according to the Orange County Health Care Agency.

As of Monday, there were 428 people reportedly being treated for COVID-19 in the county’s hospitals, the highest number since mid-August. Of those in the hospital, 105 were admitted to an intensive care unit.

Over the weekend, San Clemente also saw a jump in cases, adding 51 reported infections between Friday, Nov. 20, and Monday, bringing the city’s cumulative total to 759.

Though Wilkinson, who regularly wears a face mask for his work, participated in the rally on Saturday, he said he didn’t want to burn his mask, noting its cost and support for the reelection of President Donald Trump.