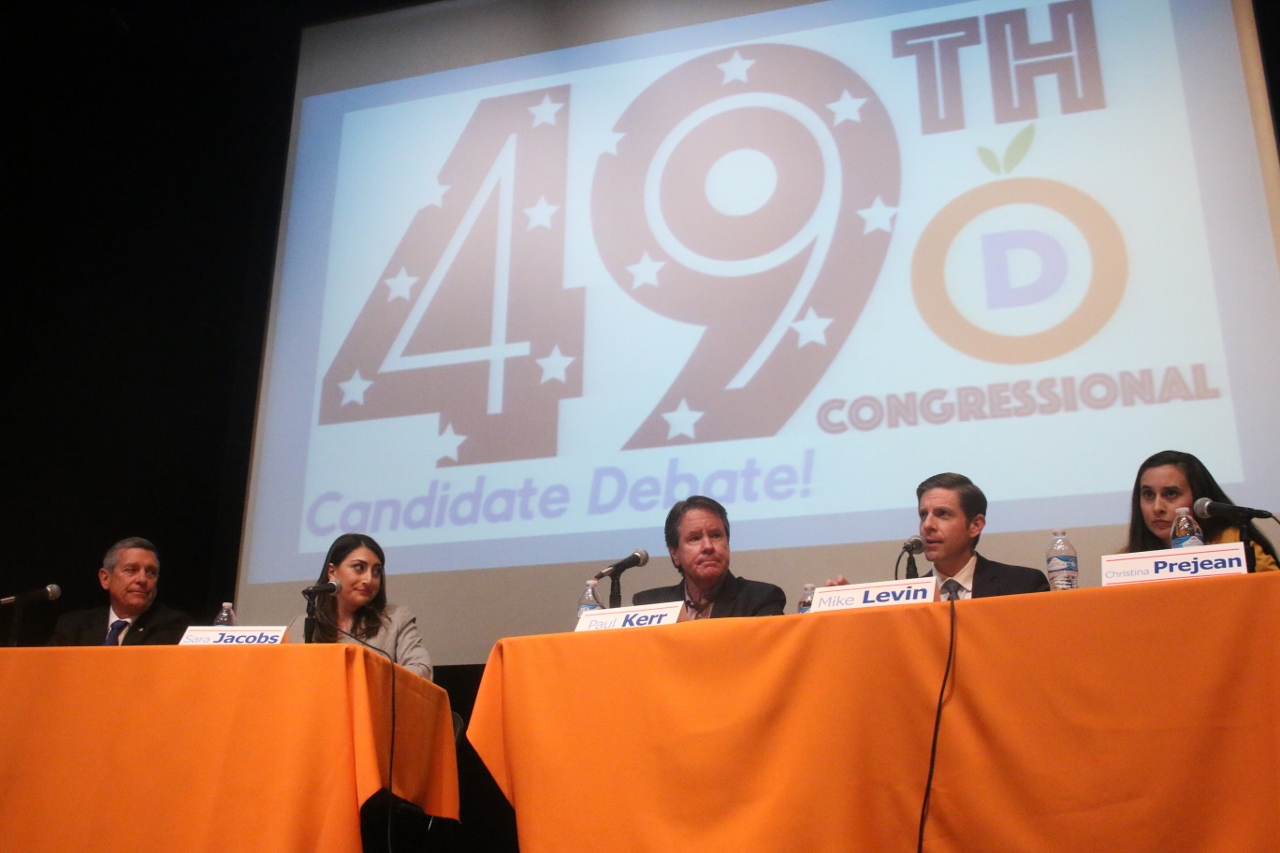 Democratic Congressional Candidates Weigh in on SONGS Issues During Debate

By Eric Heinz and Emily Rasmussen

The five Democratic candidates running for the 49th congressional district gathered on Feb. 20 at San Juan Hills High School in San Juan Capistrano for a debate that included topics ranging from The Tolls Roads to the investigations on President Donald Trump.

But a key topic candidates will have to contend with as they get closer to the California Democratic convention on Saturday and into the primary race is how to move—not necessarily what to do—with the spent nuclear fuel at San Onofre Nuclear Generating Station (SONGS).

With the retirement of Rep. Darrell Issa this year, the Democratic candidates are hoping to flip the 49th district, which runs from San Juan Capistrano to Solana Beach, from Republican to Democrat. The Democratic candidates are: Doug Applegate, a San Clemente-based civil rights attorney and retired Marine colonel; Sara Jacobs, who is based in San Diego County and has worked with the U.S. State Department; Mike Levin, a San Juan Capistrano-based attorney who focuses on environmental issues and government affairs; Paul Kerr, a Navy veteran and small business owner in San Diego County; and Christina Prejean, an Air Force veteran and attorney who represents veterans and sexual assault victims.

The moderator of the debate was Christine Mai-Duc, a political reporter for the Los Angeles Times.

SONGS operators started storing the remainder of its spent nuclear fuel rods onsite, which is right next to the Pacific Ocean, a move that has drawn ire from every corner of Orange and San Diego counties. But the waste can’t be moved until the Department of Energy finds a location for it or legislation is changed to allow for temporary storage.

When candidates were asked if they support the Trump administration’s plan to divert $120 million to find a nuclear waste storage facility and to reexamine Yucca Mountain until permanent storage is found, all of the candidates said they would support removing the fuel from SONGS campus, but they had varying answers as to what to do with the radioactive material.

Sara Jacobs of Del Mar opened the answers by elevating SONGS to the most immediate issue needing to be addressed in the 49th.

“If something happens at San Onofre, it’s not only going to affect our favorite beaches and surfing spots; it’s going to affect the economy of the entire state of California and this country,” Jacobs said. “I do not think President Trump’s proposal to reopen Yucca Mountain is going to work. It is universally hated by Nevadans, and as the state becomes more and more purple (politically), there will never be political will to reopen it.”

Jacbos said she would like to revisit the community consent-based approach to storing spent nuclear waste, giving more local voice to the areas that could harbor it and other areas of the Southwestern United States.

“The long-term issue is we’ve got to find a repository for these fuel rods,” Kerr said, which he followed up with asking the audience if they would want spent nuclear fuel rods in their backyards by a show of hands. One person raised. “Short-term, they’re putting these rods in canisters…that have manufacturing warnings that are 20 years when, right now, there are manufacture warnings (on) canisters that will give us at least 65 years.”

Levin said attacking the issue with both a legislative move for permanent storage and temporary holding would be the best path to take.

“There’s absolutely no way that we can keep the spent fuel rods there; you couldn’t devise a worse place for this amount of nuclear material,” Levin said. “What we really need is a Nuclear Regulatory Commission waiver so that we can move the waste.”

Applegate took a hardline stance on the issue and also disagreed with moving the nuclear waste to Yucca Mountain.

“The Department of Energy moves it. That’s the only federal department that moves nuclear energy,” Applegate said. “It needs to get off the beach. There’s a problem with Yucca Mountain. You’re going to ruin, permanently, the groundwater of Nevada. It’s not feasible. It needs to get into less populated areas.”

Prejean, who grew up between Vista and Oceanside, took a different approach than her counterparts, saying she would like a balance between which communities eventually accept the spent fuel.

“Our country definitely needs to find a long-term solution to figure out where we’re going to put these rods,” Prejean said. “I think that it’s also important to have someone in Congress who ensures that these rods are not buried in just the poorest neighborhoods.”

In addition to more hyperlocal issues, the candidates also discussed topics that affect the nation as a whole, including gun reform. All of the five candidates said that they were in favor of some form of gun regulation.

Jacobs said that assault weapons and bump stocks should be banned and that the Centers for Disease Control and Prevention should be able to conduct a study on gun violence in the nation. Citing the recent shooting at Marjory High School in Parkland, Florida that left 17 people dead, Jacobs said that the younger generations will make gun regulations happen.

“This insanity has to stop,” Kerr added, after noting he is a gun owner and believes in the Second Amendment.

The Democratic candidates must receive 60 percent of the caucus vote for approval at their party’s state convention on Saturday, Feb. 24 in San Diego in order to be considered for endorsement by the California Democrats.

A straw poll was taken during the debate of who attendees would vote for if the election was today. Mike Levin received 47 percent of the vote in his hometown debate, Doug Applegate received 31 percent, Sara Jacobs received 17 percent, Paul Kerr received 3 percent and Christina Prejean received 2 percent.

Joshua Hancock is running on the Libertarian ticket, and Jordan Mills is running for the Peace and Freedom Party.

An extended version of this article can be found under the same headline at www.sanclementetimes.com.