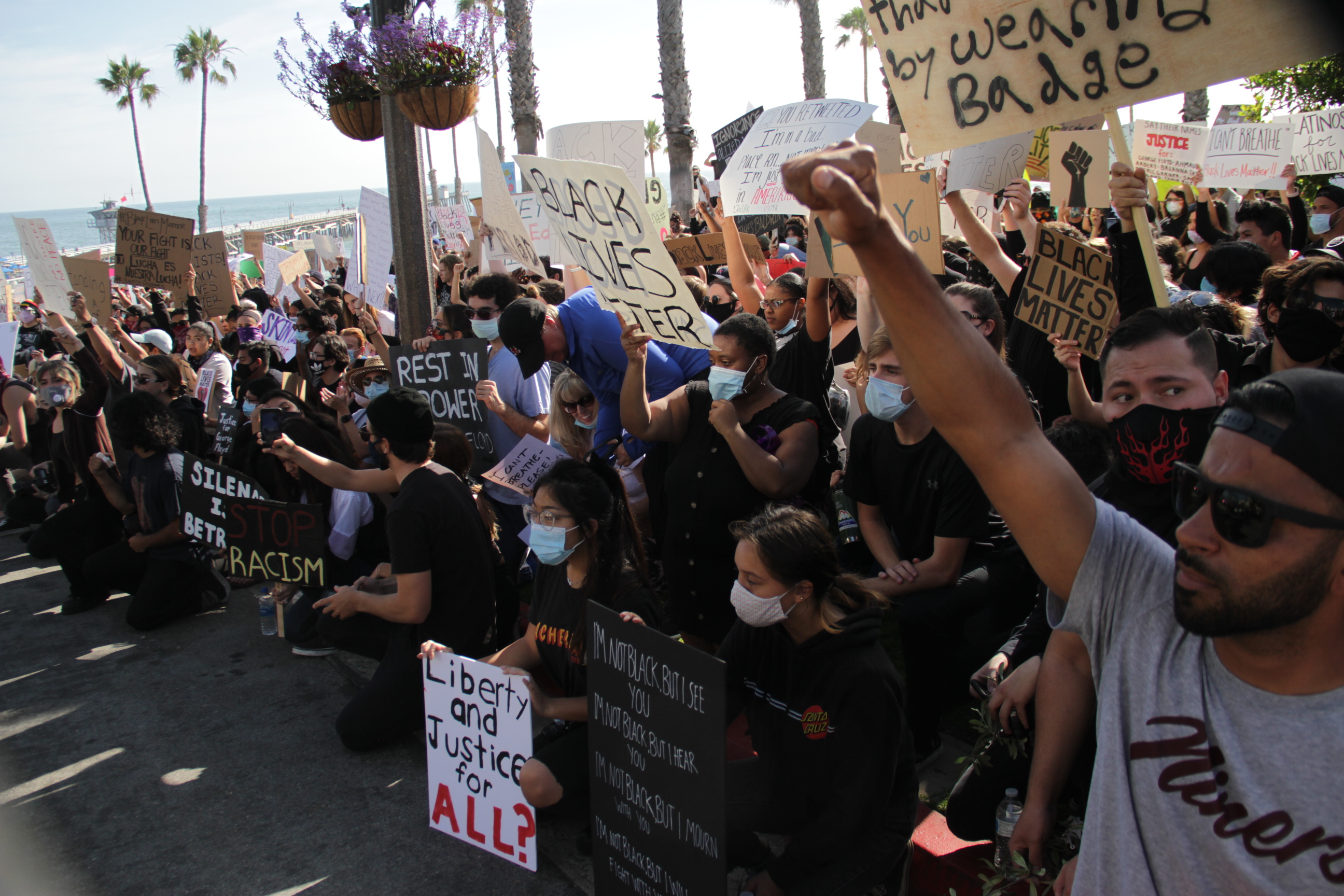 Hundreds of demonstrators gathered in San Clemente on Sunday, May 31, to peacefully protest against social injustice and police brutality following the death of George Floyd, a black man who died while in police custody in Minneapolis on Memorial Day.

While marching from North Beach to the Pier Bowl, the protesters, estimated to number about 500 according to the Orange County Sheriff’s Department, carried signs decrying police brutality and chanted “No Justice, No Peace,” “I Can’t Breathe” and “Black Lives Matter.”

Outrage and unrest over Floyd’s death has since sparked mass protests in communities throughout the nation, with many of them turning violent. Riots and looting in areas such as Los Angeles this past weekend prompted cities and counties to enforce curfews to prevent more vandalism. No curfew has been imposed in San Clemente.

Sunday’s rally went without any such incidents, according to OCSD, which praised the group for remaining peaceful while rallying to have their voices heard.

“The demonstrations in San Clemente have ended peacefully,” OCSD said in a Facebook post on Sunday night. “Thank you to those who came and civilly expressed their views. There were no arrests, no property damage and no injuries today. We have heard from our community and appreciate your support. We will continue to listen while protecting your First Amendment rights.”

The organizers of Sunday’s march and rally made it a point to keep the local demonstration peaceful, imploring demonstrators at the onset not to engage with counterprotesters.

“It was important for us to stress the peaceful aspect, because we love our town and we want to maintain peace, and we want to promote awareness,” said Kirra Bennett a 28-year-old San Clemente resident and one of the organizers of the march.

Speaking only for herself, Bennett added that she doesn’t “know if violence is the way that you can get all different sides to listen to you.”

“So, I think that was ultimately the motivation,” she said.

Sunday’s rally, Bennett explained, was meant to highlight systemic racism in the U.S. that has claimed the lives of many black individuals, as well as pay tribute to Floyd, whose death has enflamed longstanding tensions between the African American community and law enforcement.

“We’re out here collectively, because there’s injustice in this country; there’s injustice that trickles down into this town, and that injustice is that there’s systemic racism in this country, and there’s no justice for people of color, first and foremost,” Bennett said. “We’re honoring the life of George Floyd and the countless others of those who were murdered by police brutality. . . . We’re here to honor that and also condemn police brutality.”

Minneapolis police officers stopped Floyd on May 25 after a store clerk had accused him of using a counterfeit $20 bill. What transpired during his arrest has since sent shock waves across the nation.

Recorded video taken by onlookers shows one of the four responding officers—Derek Chauvin—pinning Floyd on the pavement by kneeling on the 46-year-old’s neck as he gasped and pleaded for air, struggling to breathe.

Chauvin, a white officer with more than 18 years of service with the Minneapolis Police Department, has since been fired, and he faces charges of third-degree murder and second-degree manslaughter. The other three officers involved in the arrest—Thomas Lane, J. Alexander Kueng and Tou Thao—have also been fired and remain under investigation, according to news outlets.

Mafouta was wearing an “I Can’t Breathe” shirt—a reference to the 2014 death of Eric Garner, an unarmed African American man who, while being put into a choke hold by a New York City police officer during an arrest, repeatedly said, “I can’t breathe.”

“I found myself wearing this same shirt that I thought I’d never have to wear again,” she said during her speech. “These past few days I thought to myself that maybe we do have to come to terms with the fact that America is a country that would allow its citizens to be killed in cold blood and let the murderers get away with it.”

“I found myself wearing this same shirt that I thought I’d never have to wear again,” she told the crowd during her speech. “These past few days, I thought to myself that maybe we do have to come to terms with the fact that America is a country that would allow its citizens to be killed in cold blood and let the murderers get away with it.”

Daniel Panteleo, the white NYC officer who had arrested Garner on suspicion of illegally selling loose cigarettes, was fired from the department. Federal prosecutors opted not to bring charges against him.

“Enough is enough. We demand justice. We demand fair trials, with confident and cognizant juries,” Mafouta said. “No more will we be scared of going on a jog, playing our music loudly or getting a traffic ticket. No longer will we stand silent as our police officers, the very people who are meant to protect us, are systematically murdering people of color and getting away with it.”

In an internal memo to OCSD personnel, Orange County Sheriff Don Barnes on Thursday, May 28, had condemned the actions taken by Chauvin and the other Minneapolis officers, calling Floyd’s death wrong.

“Clearly what occurred goes beyond the scope of any tactic we are trained to use,” Barnes said in the memo. “Equally troubling was the fact that three officers stood by while their partner acted in a manner that contradicts his sworn commitment to protect and serve.”

Barnes went on to note that OCSD trains diligently to utilize de-escalation strategies while strictly adhering to the use-of-force policies.

“However, training and policies are only as good as the people entrusted with carrying them out,” he wrote. “My expectation of each member of this Department is that you conduct yourself with a high ethical standard and treat each life with value and respect. . . . The badge is tarnished when a peace officer acts outside of their training, violates rights or lets bias cloud judgment.”

“They (police officers) are dealing with a lot of people, and you have to understand what goes on in our world,” said Hildreth, a 20-year-old black woman. “We’re in a racist world today, so I want them to be trained to know that you do not have to go out there and kill black people.”

Continuing her thought, Hildreth noted that many police officers have no problem defusing situations with white individuals.

The minimum police academy training requirement for peace officers in California is 664 hours, but depending on the city and county, minimums could be closer to 900 hours. Those training for OCSD through the Sheriff’s Regional Training Academy in Tustin undergo roughly 984 hours of training, or about six months.

According to the state of California, cadets are required to undergo instruction related to cultural diversity and discrimination, as well policing in communities.

Hildreth stressed that while she does respect law enforcement, she takes issue with officers who would allow colleagues to practice excessive force, particularly against African Americans, without any challenge.

“I would definitely say that we’re not anti-cops; I’m not out here saying all cops are bad, but the cops who do condone it within their department, within their city, then I say they are bad if they condone that type of behavior,” she said.

Asked what justice for Floyd means for her, Hildreth said she wants to see Chauvin convicted of manslaughter and face stiffer punishment—such as the death penalty—compared to other officers who had been accused of killing unarmed black men but were let off without facing any serious charges, to serve minimal prison time.

“It shouldn’t be third-degree murder. Third-degree murder is an accident. It wasn’t an accident, because you knew what you were doing when you put your knee on him,” Hildreth said, addressing Chauvin. She added, “Honestly, justice would be manslaughter or death penalty, because you’re here to protect us, and you did the exact opposite.”

While Sunday’s protest in San Clemente went largely without incident, the group was met with taunts and verbal jabs by a few counterprotesters during the rally.

During the height of the rally, Bassad Pesci, the apparent leader of the counterprotest, stood on the sidewalk opposite the group and chanted back at them, “All lives matter!”—a counter response and criticism of the Black Lives Matter movement.

To de-escalate clashes with Pesci and maintain the peace, one of the lead organizers of the march, who asked not to be named for fear of reprisals, urged demonstrators to go back to the other side of the street and “take a knee.”

Meanwhile, demonstrations in Huntington Beach and Santa Ana over the past weekend were deemed as unlawful assemblies and led to the deployment of pepper spray and impact weapons to try to disperse the crowds. It was unclear as of press time if there will be future demonstrations in San Clemente decrying social injustice and police brutality.