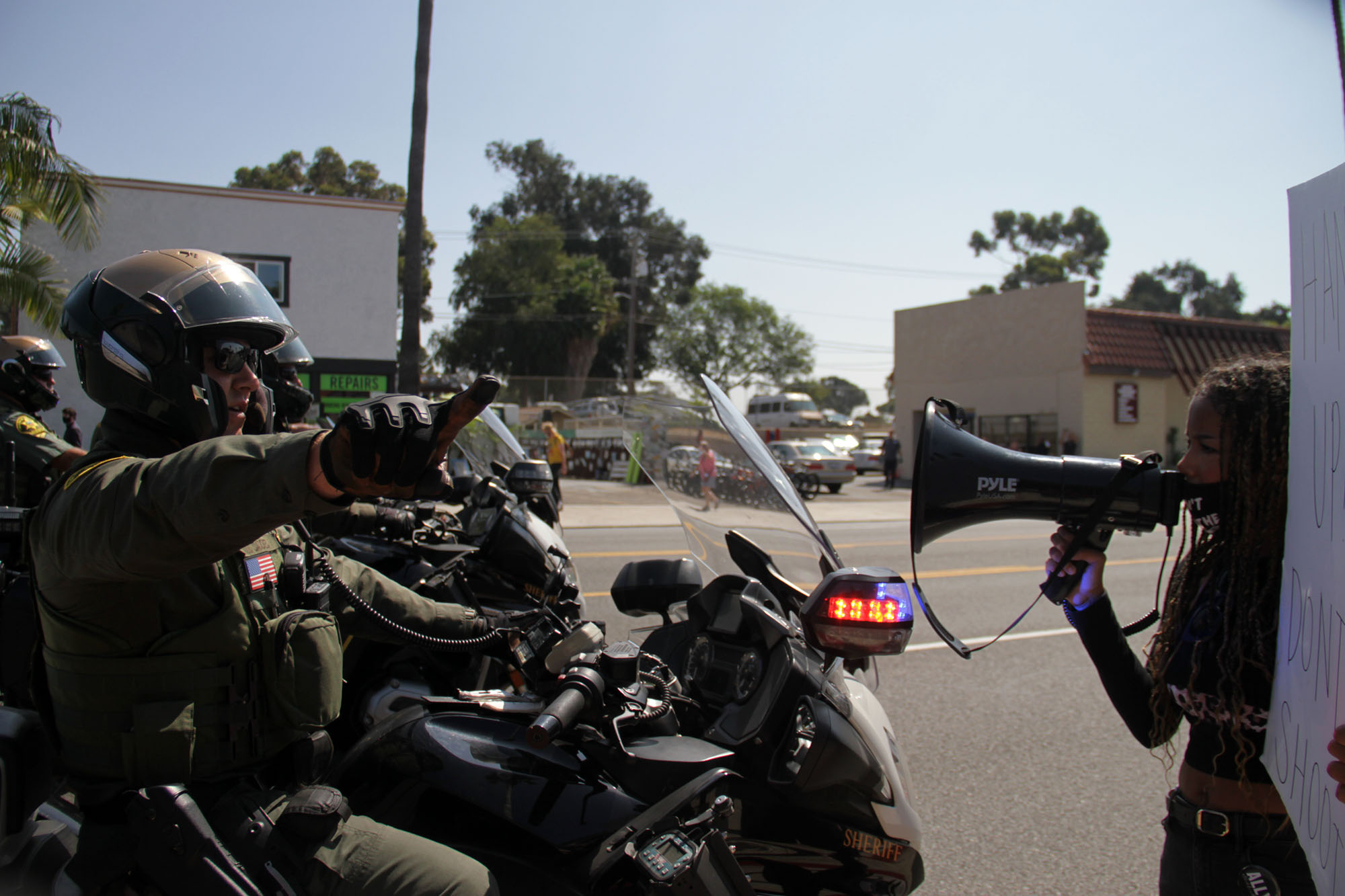 Story and Photos by Shawn Raymundo and Collin Breaux

Thursday, Sept. 24, was a day of social unrest in San Clemente as dozens gathered to peacefully protest the police shooting of a homeless Black man who died outside of a local hotel during an altercation with sheriff’s deputies the day before.

Protesters first gathered in the morning outside the shuttered Pipe’s Café on El Camino Real, just down the street from where Kurt Andras Reinhold, a 42-year-old homeless man was shot by a deputy after reaching, authorities believe, for the officer’s firearm on Wednesday, Sept. 23.

Reinhold had been stopped that Wednesday afternoon by two deputies with the Orange County Sheriff’s Department’s homeless outreach unit, but it remains unclear as to why they contacted him.

Thursday morning’s demonstration, though largely peaceful, later escalated when the group marched down to the Avenida Mendocino overpass and began to block oncoming traffic, prompting deputies to intervene and make arrests.

According to OCSD spokesperson Carrie Braun on Friday, Sept. 25, five people were arrested during the rally—four for obstruction and one for vandalism. Braun was unable to identify the individuals, but said two were from San Clemente, while the others were from other parts of the county.

“They were blocking the roadway and they were warned multiple times to leave the roadway, and when they refused that’s when they were arrested,” Braun said of the obstruction arrests. “The duty of the peace officer is to get them out of the roadway.”

The five individuals, she said, were released Thursday evening.

A second demonstration was held later in the night outside of the old city hall building on Avenida Presidio. From there, the protesters marched down to the Hotel Miramar, where the shooting occurred, to hold a vigil for Reinhold.

To the crowd who initially gathered at old city hall, Mission Viejo resident Ivette Boyzo said they gathered to pay their respects and mourn. The demonstration was to emphasize that Black lives matter, Boyzo said. The crowd chanted “No justice, no peace, no racist police.”

Whitney Azizi, who lives in Orange County, marched with other protesters throughout San Clemente and said she participated because of the death of Reinhold and the larger issue of defunding the police. Certain duties, Azizi said, should be taken up by organizations like mental health boards, while more funding should go towards helping the homeless, drug rehabilitation and welfare.

“Heartbroken and angry,” Azizi said when asked her reaction to Reinhold’s death. “It just seems like one after another, and it’s getting more and more difficult to deal with.”

Speaking during the first protest outside the hotel, San Clemente resident Taylor LaBarbera, 30, expressed criticism for over the deputies’ handling of Wednesday’s incident involving the altercation and subsequent shooting.

“If they are not trained well enough to keep a homeless man away from their gun, which should be clipped—first of all—then they are not well enough trained to be out on the street dealing with homeless people,” LaBarbera said. “This is what we talk about when we say ‘defund the police.’ ”

LaBarbera further explained that defunding the police—a rallying cry for the Black Lives Matter movement since the death of George Floyd this summer—means “put funding from the police department into training for you to have homeless outreach that actually works.”

The curfew was in effect from 9 p.m. Thursday to 6 a.m. Friday. The council convened another special meeting late Friday afternoon when they opted not to extend the curfew into the weekend.