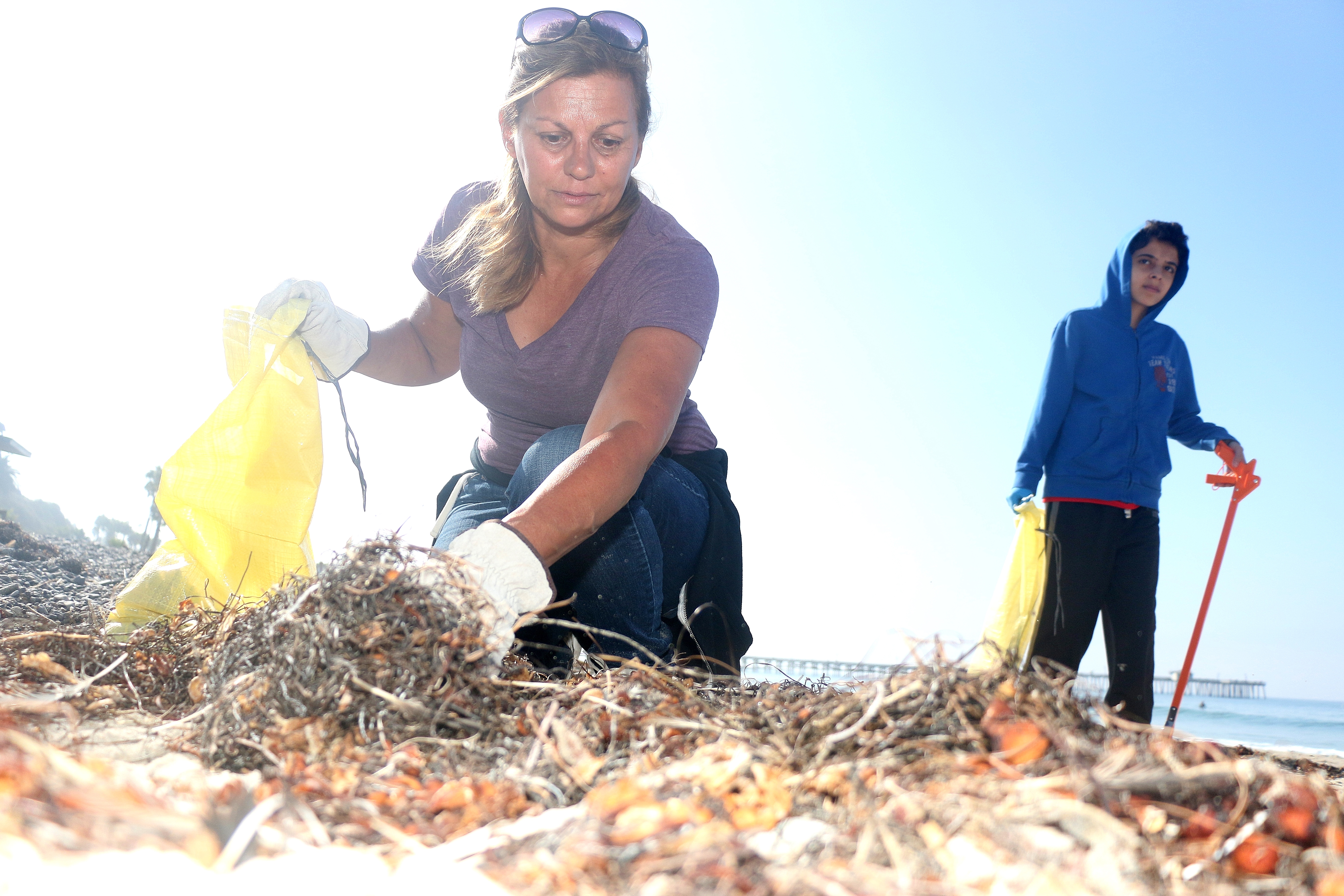 Rose DeLloye, left, scours some seaweed for debris on Saturday, Sept. 17, near the San Clemente Pier as Muhammad Alhuwaimani walks up the beach during Coastal Cleanup Day. Photo: Eric Heinz

Volunteers scoured the rocks of a seawall, where trash accumulates often after a period of time. Photo: Eric Heinz

Evan Harline, 8, makes his way out of a gap in the seawall near the San Clemente Pier during Coastal Cleanup Day, Sept. 17. Photo: Eric Heinz

Hundreds of volunteers came out Saturday to participate in the annual Coastal Cleanup Day on Saturday, Sept. 17. Although the weekend has passed, there are more local cleanup and preservation organizations in the area trying to get off the ground.

Shon Miller, founder of the San Clemente Beach Conservation Program, is trying to get a monthly beach cleanup started in the local area. Miller said he then wants to expand it as far as he can.

“It’s basically a volunteer group started a couple months ago, and we’re putting money together and the paperwork to become a nonprofit,” Miller said. “We’ve done two cleanups, and the third will be on Sept. 25.”

Miller is a San Clemente native, and he said his family has been here for generations.

He said he takes pride in the city because “it’s easy to get people together and start something positive, and we’ve got a good snowball going.”

During the beach cleanups, Miller said he provides lunch for volunteers and has been giving out T-shirts.

“My goal is to start small and make a positive impact here in San Clemente and eventually take the next step all around California, and then go to Bali and help out there,” he said. “It’s all starting with baby steps and focusing on our own community and showing people we can make a difference.”

The cleanup on Sept. 25 will take place at noon at San Clemente State Beach, with volunteers meeting at the bottom of Avenida Calafia. He said he’s also reached out to Boy Scouts and plans to involve other nonprofits in the effort. The goal is to get at least 50 people participating. There will be a barbecue, and Miller said he wants to make it a “real family get-together.”

“It’s been crazy to see the response, and people have been offering free services … I’ve never seen a reaction to something like this.”

San Clemente Beach Conservation Program is in the process of building a website, and they’re also partnering with One at a Time, another local nonprofit that does overseas water filtration installation.

Miller said the need for his group and others is urgent.

“I’ve lived (in the Pier Bowl) three years, and it’s been crazy how fast our city is growing and seeing the increase of the litter around town, especially around the beaches,” Miller said. “I see this and it makes me pretty sad to see, but I can’t be sad or complain if I’m not doing something about it.”

Miller said although cigarette butts are the most common litter, he said he sees a lot of juice boxes and containers as well as straws, and a lot of little plastic material that accumulates.

“Our first cleanup, we filled 12 bags full of trash, and our second cleanup, we had 20 bags of trash,” he said. “Those two we covered from (south of) T Street all the way to 204s, picking up as much as we could in a two-hour period.”

San Clemente Beach Conservation Program has a Facebook page up currently, and people can contact Miller at 949.228.0440.

San Clemente High School organization Team Zissou participated in this year’s cleanup. The head of the club, Jackson Hinkle, said the 90 SCHS volunteers collected more than 800 pounds of trash and recyclables in the four miles of beaches they covered. Other SCHS clubs that participated included Blue Oceans Club and Environmental Alliance.
Cigarette butts, Williams said, are the most prevalent debris.
“In general for Coastal Cleanup Day, the most commonly collected (item) is cigarette butts,” Williams said. “Trillions are littered all over the world. Some of the other things are plastics, whether that’s just wrappers or single-use plastic. Also Styrofoam and grocery bags. We’re seeing less of those these days but food wrappers are still around.”

Williams said cigarette butts are “extremely harmful” for the ocean because they’re not biodegradable. The cigarettes contain chemicals and dyes and the filters are absorbent materials.

“In Orange County, we have a huge runoff pollution problem, so the things that we find can originate from 40 to 60 miles away,” she said. “They travel through the channels and creeks and rivers and absorb the toxins, and they can release that to the environments or animals.”

The most dangerous items are derelict fishing gear, like buoys and fishing lines.

A study, commissioned by Ocean Conservancy as well as the Commonwealth Scientific and Industrial Research Organization in Australia and several other organizations, found that fishing lines and associated debris, and plastic bags are a major factor in marine life kill-off.

Bill Would Ban Smoking on Beaches

Gov. Jerry Brown currently has a bill on his desk (SB 1333) that would ban any kind of smoking, whether from tobacco products or electronic cigarettes, on California’s state beaches and within state parks as well as the disposal of smoking products on the beaches and the parks.

Fines for people convicted of smoking on the beaches can be up to $250, according to the bill.
The city of San Clemente already has a ban in place on its beaches except for in designated smoking areas, if there are any. Most recently, the city banned smoking at beach entrances.
Rose DeLloye said she volunteers for all of the cleanups and walks the trail using doggie bags to pick up trash. DeLloye said she didn’t see quite as many cigarette butts during the weekend as she usually does, but it ebbs and flows.

“During the holidays and the summertime, we definitely get an increase in trash, but it’s kind of stayed the same,” DeLloye said. “I think most of the people who live around here are fairly cognizant of keeping our beach beautiful. Today I haven’t, but if you walk on the trail you can see a lot, and they’re not supposed to be smoking up there, but it seems like there’s a little bit of decrease.”

DeLloye said she found much of the usual trash that’s on the beach.

“There’s a lot of plastic bottles and things like that,” DeLloye said. “People just decide instead of walking a little bit farther and throwing it in the trash can, they just leave it wherever. If everyone would pick up a piece of trash when they see it, this place would be so much nicer.”

Robin Plaziak recently moved to the San Clemente area from Rhode Island and said she always did beach cleanups there. She said they found “not too much trash, a lot of cigarette butts, which is pretty normal, although not as many as in past years.”