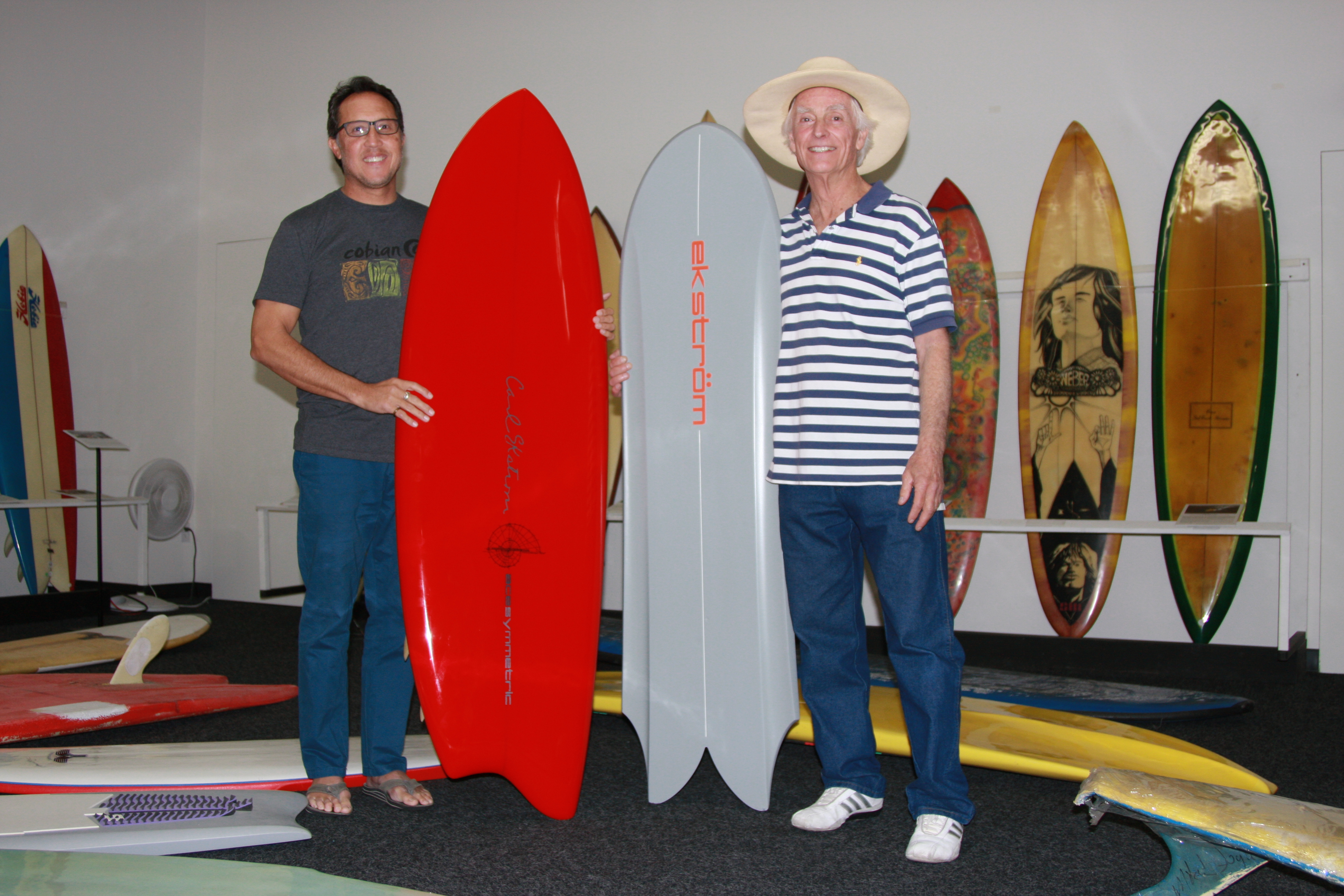 Down the Line, Outside the Box

Surfing is a sport where each ride is different from start to finish, thanks to the infinite variety and random changes of ocean waves as tides rise and fall, swells come and go, sandbars shift and fickle winds change speed and direction.

From Feb. 7 through the end of April, the Surfing Heritage and Culture Center is hosting an exhibition featuring four innovators who have gone beyond experimentation with rocker, fin set-up, materials, outline and dimension on classically symmetrical wave riding vehicles.

“What Box? Thinking Outside Traditional Lines of Surfboard Design” featuring the work of Carl Eckstrom, Tom Morey, Donald Brink and Ryan Burch, kicks off Saturday, Feb. 7 from 6 p.m. to 9 p.m. at SHACC, 110 Calle Iglesia in San Clemente. The event, free for members and $5 for non-members, will include an exhibit of board—and other wave riding vehicle—design that breaks with tradition in every direction, from materials to asymmetry. Opening night will also feature food catered by Mahé of Dana Point and a no-host bar.

Barry Haun, SHACC curator and creative director, said the show is designed to focus on shapers who have not followed fads, instead choosing not just to go outside the box, but to break it down completely. During its run, the exhibit will include a special night with each shaper when guests can speak with them one-on-one.

“Because the tri-fin thruster came out in the early ’80s and essentially has not changed in 30-some years, people are more open to trying new things right now than they have been in a long time,” Haun said. “These guys, to me, are at the forefront of cutting-edge design and I think the possibility of pushing surfing on the non-competitive level is wide open right now.”

Carl Eckstrom, who began experimenting with asymmetry in 1965 and held a patent on it from 1967 through 1984, said he is delighted to be featured among such a talented group, not just in shaping, but surfing as well.

“I grew up riding Windansea in La Jolla. Back then we were all riding fish, twin fins that are really fast down the line but don’t go from rail to rail very well,” Eckstrom said. “If you were going left foot forward on a right, you would go really fast but the board would keep tracking in the same direction.

Eckstrom said he is also happy that asymmetry is experiencing a new surge in popularity, as the idea has had its ups and downs over the years.

“Recently a lot of guys are getting into it and the only way to get it out there and advancing is to have more people doing it. Just having one person doing it is limiting,” Eckstrom said. “It’s a more custom way of building a board, depending on how and where a person likes to ride—right or left breaking wave, it can be made either for the person and the wave or one or the other.”

On exhibit will be examples from heavily-glassed, high-gloss specimens that look like sculpture, to “Franken-boards” pieced together or carved out of a variety of unconventional materials.

“Tom Morey invented the boogie board. More people have surfed on those than anything else and we have the very first one of those,” Haun said. “And he has continued to experiment with that design over time. He’s also got things like wheel instead of a fin on a board—the idea being that you could roll it over the beach to get there and then instead of it getting hung up in kelp, it would just roll right over it. He’s got double-wide boards that he’s stuck together; he’s tried anything and everything.”

“It’s going to be fun working with such incredibly talented people, both in the design field and as surfers. These guys are amazing,” said Eckstrom.