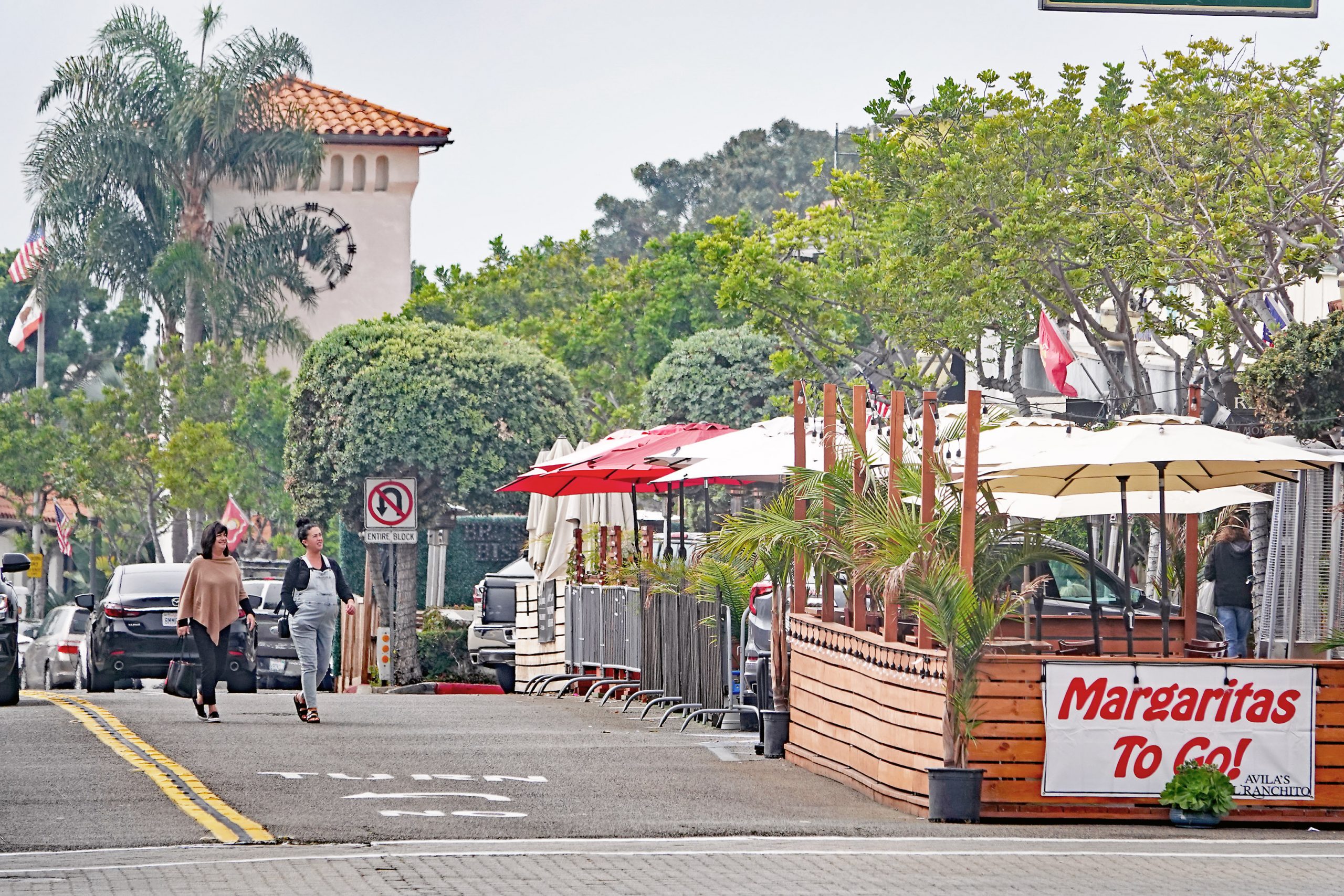 Restaurant owners in Downtown San Clemente will soon be required to dismantle their outdoor dining decks, freeing up parking spaces that retailers and shop owners have sought for their patrons in anticipation of the holiday shopping season.

“This council has been very generous with the restaurants in town, and we’ve bent over backwards, and the small shops and small retailers have been very patient as we’ve taken up those parking spots, which in fact saved the businesses,” Mayor Pro Tem Gene James said during the city council’s meeting on Tuesday night, Nov. 2.

Restaurants that have continued to use public parking for their outdoor services have had to pay a monthly fee to the city since mid-June—when the state reopened the economy and establishments were allowed full use of their indoor seating.

As part of the fee program, the council set the mid-November deadline to coincide with Daylight Savings Time, when the demand for outdoor dining is reduced and more parking would be needed for holiday shopping. It was also meant to clear the street ahead of a planned capital improvement project to repave Avenida Del Mar in January 2022.

The repavement project, according to the city, is likely to be postponed to January 2023 as a result of staffing issues within the public works department.

Chris Aitken, chairperson of the San Clemente Downtown Business Association’s Board of Directors, said on Wednesday morning, Nov. 3, that the downtown restaurants would have liked to see the outdoor dining program extended for as long as possible.

He added that while the restaurants “also understand that there are some competing interests in downtown,” reports from restaurants have shown open-air dining to be “an overwhelming success and believe it’s a very good thing for downtown and the San Clemente community.”

Asked to expound on those competing interests and the program’s impacts to shop owners over the past year and a half, Aitken acknowledged that there have been some concerns over dining areas taking away parking in front of the storefronts, “but we believe the positive aspects outweigh these factors.”

“I believe the outdoor dining does help all businesses downtown. It brings a vibrancy to downtown and foot traffic,” he said. “We understand it’s not a perfect process, but we believe it’s very positive for the community.”

The council on Tuesday night received a presentation from Economic Development Officer Jonathan Lightfoot, who gave an update on the outdoor dining program, as well as on the city’s weekend trolley services, which were recently extended through the fall.

Councilmembers also heard from one commenter, Mikii Rathmann, owner of Mikii’s on Del Mar, who said she and other retailers were enthusiastic about ending the open-air dining program, particularly before the city’s winter kickoff events in early December.

“There’s definitely more businesses than the restaurants to consider when thinking about extending this program,” she said. “If you are considering extending it to Thanksgiving, the end of November, it sure would be a blessing if the outdoor dining decks could be gone before the Santa’s Village by the Sea and the Puttin’ on the Glitz event.”

The council had debated on whether to extend the outdoor dining program through Nov. 29, but ultimately decided it would be optimal to have the decks along Avenida Del Mar removed weeks ahead of the winter events.

As part of their discussion of the outdoor dining program and trolley service, councilmembers voted unanimously Tuesday night to have staff bring back a report to potentially exempt eateries in the Pier Bowl area and businesses using their own parking lots for outdoor dining from the mid-November deadline.

Such establishments, which, the council reasoned, don’t take up any public parking, could possibly continue to operate outdoors until early January.

Similarly, the council asked for a report to possibly extend the trolley service, which is also set to end in mid-November. Lightfoot explained that a decision to extend the outdoor dining program for Pier Bowl restaurants and eateries operating on private parking spaces could provide the city with the revenue necessary to continue the trolleys for a bit longer.

The council will next meet on Nov. 16.