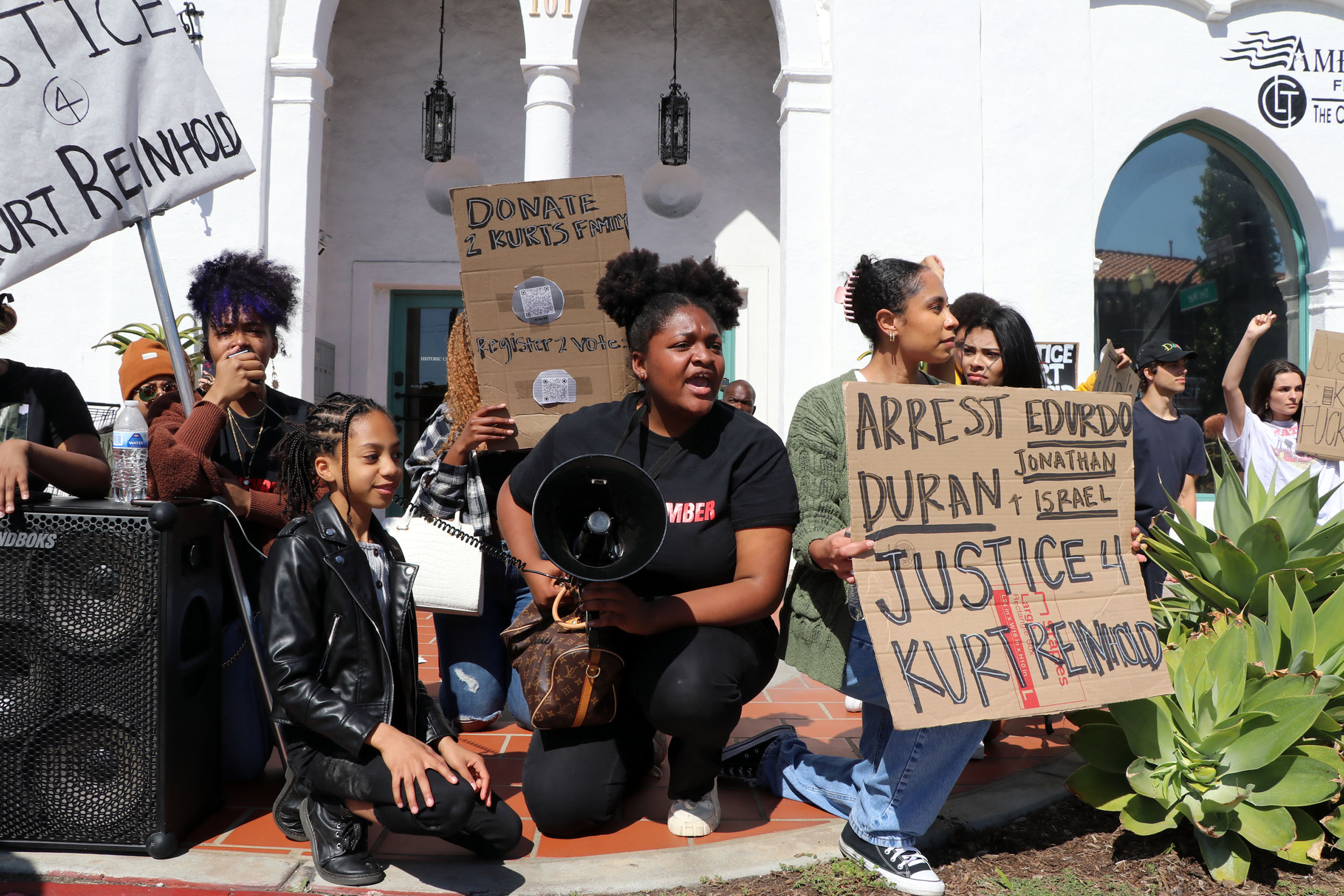 Chants of “Say his name!”, the rallying cry demonstrators have used nationwide to protest police violence against unarmed Black people, were followed by dozens of voices shouting back, “Kurt Reinhold!”

This past February, the DA’s office announced it would not bring charges against Deputy Eduardo Duran, the officer who fatally shot Reinhold, a 42-year-old Black homeless man, during a Sept. 23, 2020 stop that escalated into an argument and altercation.

Reinhold had been stopped by Duran and his partner, Jonathan Israel—both homeless liaison officers—on suspicion of jaywalking, and he was later killed as he was believed by authorities to have reached for Israel’s firearm during the scuffle outside the San Clemente hotel.

The DA concluded in its investigation that Duran had acted in a “reasonable and justifiable manner.”

The protest served to keep Reinhold’s name and story fresh in local residents’ minds, as organizer Fiona Meehan was disappointed with the lack of action, support, and outrage from the San Clemente community following Reinhold’s death.

Meehan suggested that the town would have reacted differently had Reinhold been White, and that residents moved quickly to ignore, equivocate, and move on from the incident, as well as the subsequent investigation and legal action.

“It’s completely wrong, insensitive, and the (Reinhold) family deserves so much better than that,” said Meehan, an Aliso Viejo resident who runs South OC BLM’s Instagram. She added that “the family just wants justice.”

Reinhold’s death in 2020 had sparked local demonstrations, with dozens of people rallying the following day, first in the morning and then in the evening, to protest the shooting, and march along El Camino Real.

This past December, the Reinhold family, including Kurt’s wife, Latoya Reinhold, and his mother, Judy Reinhold-Tucker, filed a wrongful death lawsuit against the County of Orange, accusing the two deputy sheriffs of using excessive and unreasonable force.

During this past weekend’s protest and march, there were various instances marked by public hostility between the protesters and either opposing community members or police.

Early on, some demonstrators gathered near a car in the street with its hazard lights on to chant at passing cars and wave their signs, using traffic cones to block the right lane. Those actions attracted the attention of deputies, who asked on multiple occasions for the roadway to be cleared in the interest of safety for the protesters and oncoming vehicles.

It led to a standoff with additional police on motorcycles, but the law enforcement presence quickly dwindled after the protest returned to the sidewalk.

Later, two individuals, 34-year-old Juan Gomez, Jr., and 31-year-old Jessica Rogers, were arrested on suspicion of resisting arrest and were released after receiving a citation, according to OCSD.

Dozens of people gather for a rally and march from Hotel Miramar to Historic City Hall in the name of Kurt Reinhold on Saturday, April 23. Photos: Shawn Raymundo

Meehan organized the rally with the help of E’Layjiah Wooley, founder of Free My People, another social media-centered organization that leads protests in cases regarding police brutality against Black people.

The two connected after Wooley demonstrated this past March against the June 2021 shooting in Norwalk of Frederick Holder, another unarmed Black man. Meehan noticed Wooley’s activism on TikTok, and while needing help to organize down in Orange County, Wooley was able to provide guidance and introduce other knowledgeable activists to Meehan.

The Los Angeles-area activist said she was prompted to get involved after watching the video OCSD released in February 2021 that documented the Reinhold incident.

“I was in disgust,” Wooley said. “I felt terrible, my stomach dropped, and honestly, I didn’t watch the full video until recently.”

It took a month to plan, fundraise, and have meetings in preparation for the rally, as organizers also wanted to select a date suitable for the Reinhold family—including Latoya, their daughter, Savannah Reinhold, and his parents—to join them.

Meehan also noted that the protest came at an opportune time—in the middle of election season when those in the racial justice advocacy space look to vote out incumbent District Attorney Todd Spitzer.

Before marching toward downtown, multiple speakers took turns on a microphone to voice their gratitude to the supporters who turned out, their condolences and support to the Reinhold family, as well as outline their goals to educate and fight for change.

“Thank you so much for supporting and doing the best you can to help us out with this very hard time,” Savannah said.

Jawad Vision, another activist based in Los Angeles, called for significantly changing the U.S. Constitution and the justice system. Vision claimed both institutions were founded on oppression and racism, and that those who were not born with privilege have thus been tossed to the wayside.

He went on to cite LA District Attorney George Gascón’s decision not to file a criminal case in the 2020 officer-involved shooting of Anthony McClain.

“We’re fighting for humanity here today,” Vision said, adding, “But ‘Black Lives Matter’ is the most important thing right now, because we are the target.”

He added that each of the allies and demonstrators present was obligated to continue pressing on.

DeAnna Sullivan, the mother of David Sullivan, the 19-year-old man who Buena Park Police shot and killed during a 2019 traffic stop, told her son’s story and shared her grief and loss with the Reinhold family.

She called the pain that suffering families experience as “generational,” and pleaded for change that would allow for law enforcement to be tried in civil court.

After the protest concluded, Latoya said she believed the event went well and that it was mostly peaceful. She added that it was good for the family to be present in support of the cause, as it also allowed people to put a face to the names they had heard about in the media.

“The overall goal was to keep Kurt’s name alive in the news and to kind of tell his story about what happened to him, (and) about the injustices that people of color face in regard to the police and police brutality,” Latoya said.