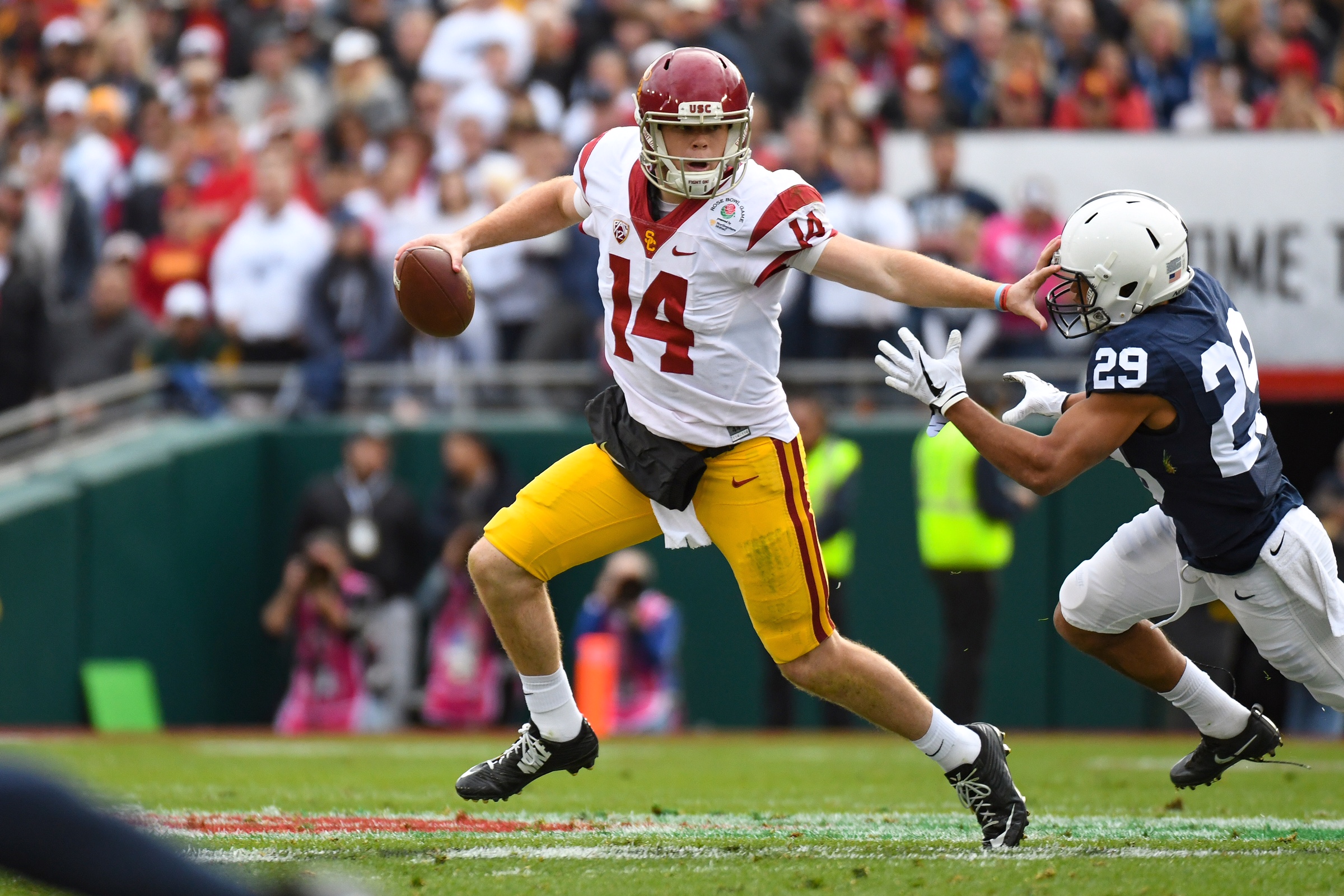 Draft Day for Darnold: Where Will the Former Triton Land in the NFL Draft?

The first round of the NFL Draft begins on Thursday, April 26 at 5 p.m., and the former USC quarterback (QB) figures to be among the top picks at AT&T Stadium in Arlington, Texas.

Darnold has been described as the complete package at quarterback.

He has durable size at 6-foot-3, 221 pounds but also has mobility to extend the play or pick up yards with his legs. Darnold also has shown his arm strength and an innate ability to make plays. He has that undescribed “it” factor.

Darnold is rated as the top quarterback by ESPN and Mike Mayock of NFL.com and the No. 4 and No. 7 overall prospect by each, respectively.

However, it is a tight race for that top quarterback spot and the No. 1 overall pick, and despite seemingly cementing himself as the top pick after a stellar pro day at the end of March, chatter has risen in recent days that Darnold could slip a couple spots.

Let’s look at Darnold’s possible destinations at the top of the NFL Draft:

The Browns hold the No. 1 and No. 4 picks, and coming off of a 0-16 season, they have plenty of holes to fill. A franchise quarterback is a must for any team looking to succeed in the NFL, but the Browns have seemed split on who that franchise QB should be. Darnold was the early favorite, and Browns owner Jimmy Haslam liked what he saw in person at Darnold’s pro day. However, Wyoming’s Josh Allen may have risen to the top of their rankings. Allen, 6-foot-5, 237 pounds, is a raw talent and a ton of arm strength. He’s done well to position himself throughout the draft process, and the Browns may not want to overlook a small-school quarterback like they reportedly did with the Eagles’ Carson Wentz, then of North Dakota. It’s also been rumored that the Browns have had eyes on No. 1 overall prospect Saquon Barkley, a running back from Penn State. With two top-four picks and plenty of available talent, the Browns have plenty of opportunity to fix their franchise, but these are also the Cleveland Browns, who have shown an inability to fix their franchise.

The Giants come in with the No. 2 pick and have plenty of directions to go in. They still have their starting quarterback with two-time Super Bowl champion Eli Manning, but after a disappointing 2017, are the Giants looking to groom a replacement? Should the Browns pass on Darnold at No. 1, Darnold and University of California, Los Angeles’ Josh Rosen would be the quarterback options for New York. Rosen is the prototypical pocket-passer and described as NFL-ready by most. The Giants could also look for a quarterback prospect later in the draft and grab a player with a more immediate impact, like Barkley. The question is do the Giants see themselves as a bounce-back candidate or in a rebuild?

The Jets slide in at No. 3, and one way or another, they are drafting a quarterback. Whichever QB the Jets deem as the top available on their board, they will select him third overall. Jets fans had already pegged their team as getting the No. 1 overall pick before last season and bought their green No. 14 Darnold jerseys. However after a surprisingly strong start and the Browns’ implosion, they settled at the third pick. If Darnold is still available here, he will most likely be a New York Jet. If the Jets fancy themselves closer to contention with their defense, maybe they pick Rosen as the NFL-ready pocket passer.

Denver Broncos or Other

The Broncos sit at No. 5 and could use a quarterback of the future. Denver paid a decent sum of money to Case Keenum in free agency, but the Broncos have had a bit of a carousel at QB since Peyton Manning’s retirement. This is where trades could come in, especially if Darnold is still somehow on the board. The Broncos could be happy with Keenum and trade this pick for more selections or other talent. Teams like the Buffalo Bills could make the move up to grab Darnold. He really shouldn’t fall past this spot, but if he does, Darnold could take a tumble as the next several teams look set at QB, or, again, it will be a situation ripe for a team trade up.

Check www.sanclementetimes.com for coverage of the results of the 2018 NFL Draft.